Asylum seekers awaiting evacuation from war-torn Libya say the United Nations has turned down scores of refugee relocation requests, including from women and children previously held in Libyan government-run detention centres where they were allegedly subject to abuse.

The rejected asylum seekers, who are among more than 900 people the UN refugee agency (UNHCR) is hosting at a transit centre in the Libyan capital, Tripoli, say they have been asked to leave the facility.

More than 40 people staged a protest at the UNHCR’s Gathering and Departure Facility (GDF) on Thursday denouncing the move, according to photos provided by sources at the centre.

The protesters, who were mostly female, held signs saying: “Refugees want peace, not rejection” and  “We need a system of appeal.”

Protesters who spoke to Al Jazeera said this was the first time the UNHCR has turned down relocation requests from refugees at the GDF. At least 87 applications were rejected last week, they said.

The UNHCR, in an emailed statement, said it was forced to refuse some applications partly because there are “simply not enough evacuation and resettlement places available” from third countries.

The agency did not comment on the number of people whose requests for relocation were turned down, but said “nobody has been told they are forced to leave” the GDF, which it described as at “overcapacity”.

The centre was set up in December to host “particularly at risk” refugees and migrants rescued from migrant detention centres in Libya, where rights groups say abuse including beatings and forced labour are widespread. Many of those held at the detention centres were caught by the Libyan coastguard while attempting to make the perilous Mediterranean Sea crossing to Europe.

The UNHCR says more than 5,000 refugees and migrants are still being held in such detention centres, of which 3,700 are “persons of concern”. The refugees whose relocation requests were turned down last were asked to leave the GDF to make space for other “more vulnerable refugees from detention centres”, the agency said.

A Somali mother who was asked to leave the GDF said she was too frightened for herself and her three-year-old son to leave the centre. “In Libya, it’s like Somalia, they are fighting each other. If you go outside there is a lot of violence,” she told Al Jazeera in a phone call.

“They will cut you, they will ask you for money … When you are a woman and you have children, and this country is not at peace, how can we live in Libya?”

Libya has been mired in chaos since the toppling and killing of longtime ruler Muammar Gaddafi in 2011. Forces loyal to rival administrations are now fighting for the control of Tripoli.

The 30-year-old said she was moved to the GDF from a detention centre in Zintan, a city 180km southwest of Tripoli. At least 22 detainees died in Zintan between September 2018 and May 2019, due to a lack of medical care and inhumane conditions.

The woman said she saw others dying in front of her.

“When we were taken from Zintan we got food, our life is changed, we thought everything will be OK,” she said, “But now we are rejected. Broken hearts… How can they reject women and children? I’m two years in prisons… All that time my baby grows up day by day.”

Another Ethiopian man who was moved to the GDF from the Abu Salim detention centre, located south of Tripoli, said applications for resettlement from his family of three, including his wife and toddler, were also refused.

The UNHCR said some of those who had their relocation requests rejected last week had “credibility concerns”, including “issues with their identity, their country or place or origin, and events in their country of origin or linked to their flight”. 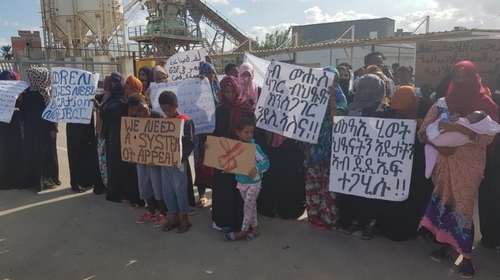 “We will continue to have to prioritise, based on vulnerability assessments, with the remainder being offered assistance with urban living inside Libya, voluntary return to countries of previous asylum or voluntary return home,” it added.

There are more than 45,000 refugees and migrants currently living in urban areas in Libya, the agency said, most of them from Syria.

So far this year, agency has evacuated or resettled 1,663 refugees from Libya. The figure is a fraction of those who are trapped in a cycle of extortion and abuse which sees them passed or sold between smugglers.

A young Eritrean woman, who has been held at the now-closed Tariq al-Matar detention centre in Tripoli, said she was “panicking” at the thought of leaving the UNHCR centre.

The young woman, who spoke to Al Jazeera on the condition of anonymity, said she was subject to electrocution by Libyan guards at Tariq al-Matar last year and continued to fear for her safety in Libya.

She said she was taken to the detention centre after being caught by the Libyan coastguard on her fourth attempt at crossing the Mediterranean Sea.

Another 24-year-old woman, also from Eritrea, said UNHCR staff offered to repatriate her to her home country, a Horn of Africa dictatorship where citizens are subject to indefinite conscription.

“They say it’s better for you if you get out from here, go back to your country. But we can’t,” she said. “It is dangerous because we have escaped, we left illegally.”