Bill and Hillary Clinton are not speaking to each other after a blazing argument over her election book, it has been claimed.

The former President threw a manuscript in the trash after Hillary ignored his advice not to publish it, according to author Ed Klein.

Bill had red-penned the book in an attempt to improve it, a friend allegedly told Klein, but flew into a rage when Hillary refused to read any of his notes. 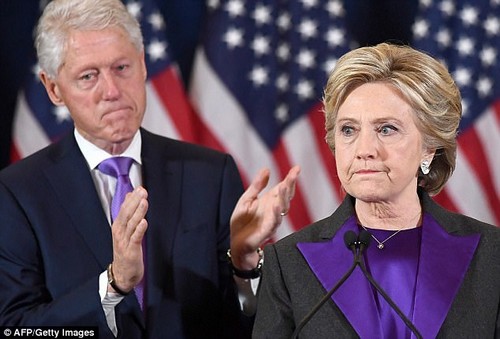 Bill and Hillary Clinton are not speaking after arguing over her election book What Happened, which Bill said made her look ‘bewildered, angry and confused’, a friend has said 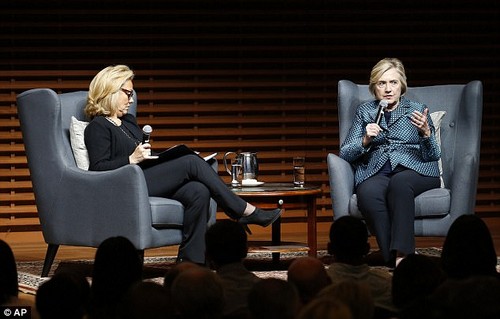 The couple were last seen together in August in the Hamptons. Since then Hillary has been on a national tour promoting the book (pictured speaking at Stanford University)

According to Page Six, the friend said: ‘He told her the book made her look bewildered, angry and confused, and that those were poor qualities in a person who aspired to be a world leader.

‘He hated the title because calling it “What Happened” would only make people say, “You lost.”

‘He urged her to postpone the pub date and rewrite the book, but she yelled at him and said: “The book is finished and that’s how it’s going to be published”.’

Bill is said to have given Hillary extensive notes on the book, which she refused to read before he threw the tome in the trash

Since then the pair have been speaking through friends and lawyers, the source said

Klein’s book All Out War: The Plot to Destroy Trump will be released at the end of October.

The argument is believed to have taken place over the summer before Hillary took off on tour in order to promote the book.

Bill and Hillary were last pictured together toward the end of August while enjoying a visit to see friends in the Hamptons. The couple have not been seen together since.

Hillary has been busy appearing on daytime TV shows and giving speeches across the country as she promotes her book, which has become a bestseller.

During the tour she has blamed women, Russians, former FBI Director James Comey and a host of other reasons for her shock loss to Donald Trump.

She has also not shied away from attacking the now-President, describing him as ‘unqualified’ and ‘even worse than I thought he was going to be.’

Clinton, most recently told Stylist magazine of her guilt at losing, saying: ‘I have a great sense of responsibility, for not winning, for letting people down.

‘Even more so when you consider who my opponent was. If I had run against someone whom I disagreed with politically, but believed was up to the job, of course I would have been disappointed.

‘But being in a position where I ended up losing to someone who I don’t think is qualified or temperamentally ready to be president was a very deep personal regret.’

Bill was previously reported to have blown up at Hillary after her defeat, despite a public show of affection during her concession speech, accusing her of failing to campaign in rust belt states which eventually voted for Trump.

According to Ed Klein, who has written several books on the Clintons, Bill accused Hillary’s campaign managers of running a ‘tone deaf’ race and ignoring the effect the flagging economy was having on millions of working class Americans.