A man has been charged by police following a 12-hour stand off which began when his girlfriend, 34, was found dead in a laneway below his building.

June Oh Seo, 37, has been charged with assault occasioning actual bodily harm following the tense standoff which saw him sitting with his head in his hands on the roof of a 26th-floor balcony in Chatswood, in Sydney’s north on Monday.

Police allege the man assaulted the woman between 4.30am and 4.35am on Monday morning, causing her ‘actual bodily harm’. 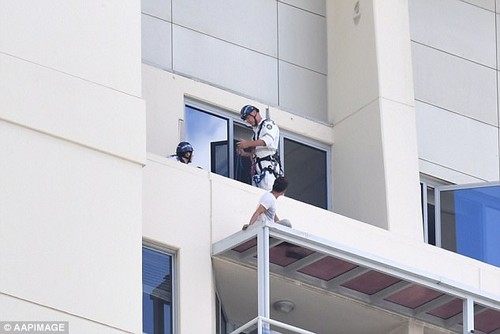 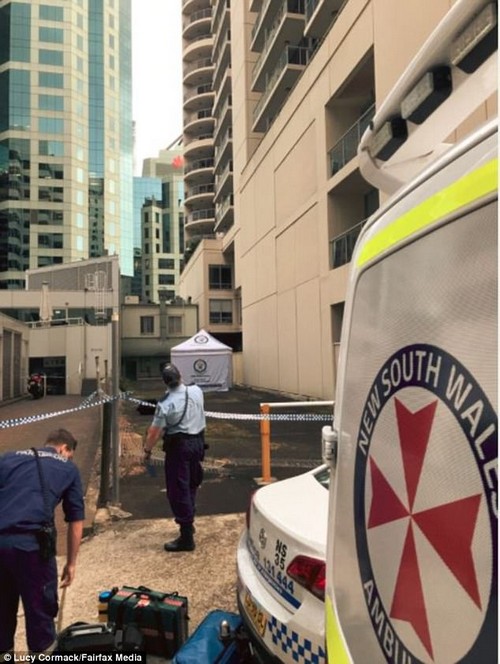 The woman’s body was covered by a police tent, pictured, as they negotiated with her boyfriend

The young woman’s body was found ‘in a pool of blood’ at 6.30am by a tradesman who noticed her lying in the alley way in her pyjamas.

Police say it is not know how she came to fall from the building.

A witness said there was blood all around her body and nearby walls.

‘We saw blood on the wall and assumed she’d been… clambering for life,’ a witness told Daily Mail Australia.

It took 12 hours for police to convince Mr Seo to go back inside the building – they could not start an investigation or look at the body before then because he was directly above the site.

Shortly after woman’s body was found, a Korean man (pictured) appeared distressed on a roof

Mr Seo, who appeared agitated, climbed onto a balcony roof of the 27th floor of the residential building shortly after police arrived.

He remained there, often appearing agitated, before surrendering after 7pm.

Superintendent Philip Flogel said the pair had been in a relationship for at least a couple of weeks.

Police believe the couple had been dating for a few weeks 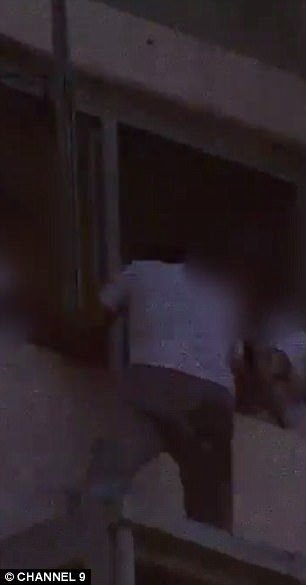 At 7.30pm police managed to convince the man to come in to the apartment