The search of Paddock’s three-bedroom house on a cul-de-sac in a retirement community in Mesquite, Nevada, was for ‘re-documenting and rechecking,’ said local police Chief Troy Tanner, who accompanied FBI agents as they served the search warrant.

Federal investigators returned to search the home of Las Vegas gunman Stephen Paddock on Sunday, while the 64-year-old’s brother was interviewed.

‘I don’t think they are after anything specific,’ Tanner told The Associated Press. ‘They’re going through everything and photographing everything again.’

Tanner told ABC News on Sunday that the second search was prompted by investigators interview with Paddock’s girlfriend, Marilou Danley. 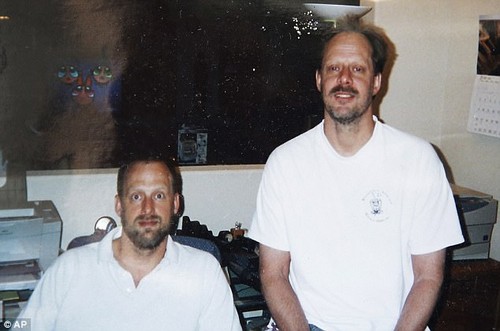 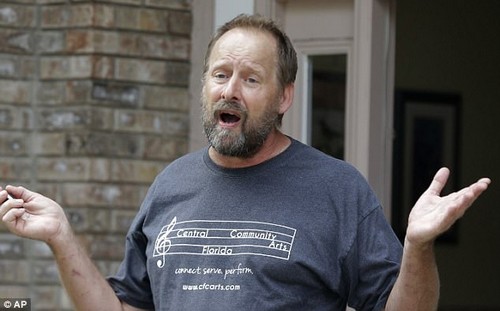 The home was first searched Monday by Las Vegas police, who said they found 19 guns and several pounds of potentially explosive materials at the house that Paddock bought in early 2015.

The search came exactly a week after Paddock opened fire on a country music crowd, killing 58 and injuring nearly 500.

Eric, who lives in Orlando, Florida, told the Las Vegas Review-Journal that he landed at McCarren International Airport at 10:15pm on Saturday and was met by FBI investigators and police officers.

The 57-year-old was immediately taken to a room where he was questioned for four hours. He had a second interview on Sunday for five hours.

I’m here to help them move forward with their investigation. I want to help them understand what they’re seeing.

‘I’m here to help them move forward with their investigation,’ Paddock said on Sunday outside his hotel before his second interview. ‘I want to help them understand what they’re seeing.’

Eric said he does not think that he is a suspect and that the officers who met him at the airport were probably to insure his safety.

He added that FBI agents, a Las Vegas police detective, a profiler and a psychologist participated in his Sunday interview.

‘I’m trying to get them to understand Steve’s mindset,’ Eric. ‘I don’t want them to chase bad leads.’

Eric says he also came to Vegas to take care of his brother’s remains and to set up a trust for the victims of the massacre.

Eric says he plans to cremate his brother and give the ashes to their 89-year-old mother.

From what he has learned about Nevada law, he believes that their mother will be named trustee of his brother’s estate. Eric obtained power of attorney from his mother, and will be using it to put the money his brother left behind into a fund for the victims. Eric says he doesn’t know exactly how much his brother is worth, but that he made millions from real estate.

The Las Vegas Police are working in conjunction with the FBI to solve the shooting – the deadliest in U.S. history.

Now more than a week after the shooting, investigators are now coming around to the idea that Paddock may have been mentally ill, insiders have revealed.

On Wednesday FBI insiders said investigators believed Paddock may have been in ‘mental or physical anguish’ based on information given by his girlfriend.

But they didn’t believe that his mental situation had deteriorated to the point of planning and executing mass murder.

Now, however, police insiders say that some investigators increasingly believe he was in the grip of a severe mental illness – and that it had been building for at least a year, ABC News reported.

The realization that Paddock may have suffered from an illness has grown as investigators have spoken to hundreds of people who knew or met him in the past year.

Outwardly, Paddock – a 64-year-old multimillionaire real-estate dealer who flitted around the US, enjoying his retirement with his girlfriend – seemed like he was doing okay.

But the profile that investigators are building is of a man who was detached from humanity and seemingly on a downward spiral, sources claimed.

Paddock had huge problems interacting with people, they said, and appeared disconnected and aloof from those that he met.

One person he had grown close to was Danley, who would accompany him around the country.

She told investigators on Wednesday that he would wake up in the night moaning and screaming ‘Oh my God!’

However, at that point investigators didn’t believe that he was sufficiently troubled to explain why he would kill 58 people and himself, and injure 489 more.

While an actual motive for the killing remains out of investigators’ reach, they are narrowing in on the possible psychological effects that may have led to it.

They’re now particularly focused on what may have occurred between September and October last year, as something seems to have affected him around that time.

During that period he bought more than 30 guns – a dramatic step up on the number of firearms he’d bought over the preceding 20 years.

He also seemed to have started gambling more, and more frequently, at that time too, insiders said.

More recently, he had been looking into many different hotel venues online, and had even visited some.

Paddock’s mental health has been a question for many since it emerged that his father, Benjamin Hoskins Paddock, had been diagnosed a psychopath.

Paddock spent nine years on the run after breaking out of prison, where he had been serving a sentence for armed robbery, in 1968.

An FBI poster described him as a ‘psychopath’ who should be treated as ‘armed and very dangerous’.

While on the run, he opened up a church and bingo parlor in Oregon, using a loophole in state law regarding places of worship to pocket the profits. He was caught in 1978.

In 1987, he was charged with running an illegal gambling operation but avoided prison; in 1989 he attempted to open a second church in Nevada because he liked to gamble there, the Las Vegas Review-Journal reported.

Benjamin Paddock’s obsession with gambling and bent for violence has obviously been linked to his son’s killing spree.

But it also emerged Sunday that Stephen Paddock was himself interested in that connection, telling a Las Vegas prostitute he was ‘born bad.’

Speaking on condition of anonymity, the woman said the ‘paranoid’ and ‘obsessive’ Paddock would enact rape fantasies with her if he his on a winning streak.

He would rant about conspiracy theories, including that the US government caused 9/11, and would pay $6,000 to tie her up and pretend to shout for help, she told The Sun on Sunday.

They even slept together in the Mandalay Bay hotel, which he used as a sniper’s nest, but, she said, despite his ‘dark and twisted side… I could never have imagined he would do something like this.’

Those remarks would have come as some surprise to Steve Wynn, billionaire CEO of Wynn Resorts, who said Paddock had been staying at his hotels for 11 years.

He said that Paddock was well known to his staff, and that he had ‘The most vanilla profile one could possibly imagine.’

‘A modest gambler at least by our standards, you know, nothing serious, paid promptly, never owed any money anywhere in Las Vegas,’ he told Fox & Friends.

‘He didn’t fit the profile of a problem or compulsive gambler.’

‘This is a man who behaved rationally, privately, a little introverted, liked to play video poker. But he was a rational man,’ said Wynn, whose properties do not include the Mandalay Bay, which is owned by MGM.

He added that his employees were stunned by the revelation that their long-term customer had killed 58 random people.

‘Now, this sounds like someone either totally demented – a behavior which he never evidenced – or someone who’s sending a message,’ he said.

Jordanian who had Brit arrested for touching hip pictured