Matthew Scully-Hicks, 31, is accused of killing 18-month old Elsie after ‘assaulting and abusing’ her over several months. He is pictured leaving Cardiff Crown Court today

A stay-at-home father accused of murdering his adopted baby daughter referred to her as ‘Satan dressed up in baby grow,’ a court heard.

Matthew Scully-Hicks, 31, is accused of killing 18-month old Elsie after ‘assaulting and abusing’ her over several months.

The couple first adopted Elsie in September 2015 and the process was finalised nearly eight months later.

She died at University Hospital of Wales, Cardiff, after the decision was taken to switch off her ventilator when doctors decided she would not survive her traumatic head injuries.

The court heard on September 22, 2015 – just 12 days after having Elsie – he sent a message to a friend saying: ‘I’m going through hell with Elsie!

‘Mealtimes and bedtime are like my worst nightmare at the moment.

‘She’s been up there screaming for 10 minutes non stop. She’s just stopped but I doubt that’s the last I’ll hear tonight.’

That evening he also sent a message to husband Craig calling Elsie ‘a psycho.’

On September 29, 2016, he sent the message to Craig describing Elsie as ‘Satan dressed up in a baby grow.’

Scully Hicks, who has no previous convictions, met his husband – who is about five years older than him – while living in Swindon, Wiltshire, in about 2006.

Scully-Hicks originally came from South Wales and the couple relocated to Cardiff in 2010 or 2011.

They married in Portugal in August 2012 and applied to become adopters later that year.

Prosecutor Paul Lewis QC said: Elsie was found unresponsive by paramedics after Scully-Hicks attacked her at his home in Fairwater, Cardiff, on May 25 last year.

Mr Lewis said: ‘The injuries that caused her death were inflicted upon her by the defendant shortly before he called emergency services that day. 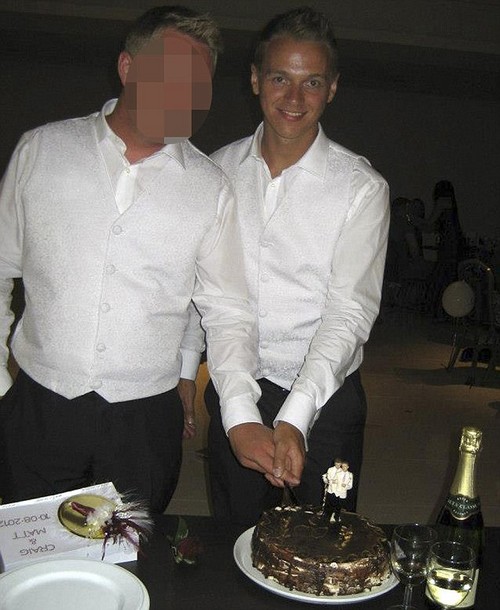 Scully Hicks, who has no previous convictions, met his husband – who is about five years older than him – while living in Swindon, Wiltshire, in about 2006

‘His actions on the late afternoon of May 25 were the tragic culmination of a course of violent conduct on his part towards a defenceless child – an infant that he should have loved and protected, but whom he instead assaulted, abused, and ultimately murdered.’

He later added: ‘It will be for you to judge whether these messages tell of his frustrations in looking after Elsie.’

The court heard police also spoke to neighbours at the couple’s previous address in Cardiff, where Elsie had spent most of her life.

Neighbours referred to Matthew Scully-Hicks as ‘the one who stayed at home.’

Susan Bevan, who lived in the joining semi detached house to the couple, said things changed when Elsie moved in, the court heard.

Mr Lewis said: ‘On one occasion she heard a little girl crying and ‘the one who stayed at home’ having a rant and shouting ‘shut up, shut up, shut the f**k up.” 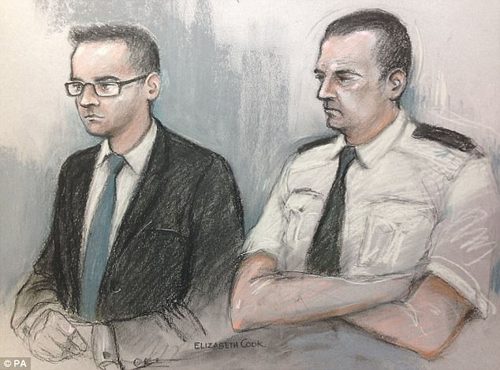 Mr Lewis said a music player was then turned up ‘very loud’ but turned down just minutes later – and the baby was still crying.

The tot – described as ‘tiny and delicate’ but with a ‘brash and bouncy’ personality by Craig – was with her new f
amily for less than two months when her right leg was broken in November 2015.

‘When Craig Scully-Hicks got home from work that evening the defendant told him that Elsie had fallen in the kitchen of their home that morning.

‘He said that Elsie had been upset following her fall but he had picked her up and consoled her and she had then ‘seemed fine.’

Matthew Scully-Hicks said that Elsie had fallen while playing at an activity table.

But Craig became concerned that little Elsie was not fully weight-bearing on the leg so decided she should see a GP, the court was told.

Mr Lewis said Elsie was generally ‘well and healthy’ but had been slow in reaching some developmental milestones such as walking.

Scully-Hicks described her physically as being ‘tiny and delicate’ but with a ‘brash and bouncy’ personality, the jury was told.

Following Elsie’s death, an X-ray of her right leg from November 2015 was re-examined.

It was found that Elsie had suffered two fractures – one near the ankle and one just above the knee.

Dr Nia John, a consultant paediatrician, said it would be ‘unusual’ to suffer two such fractures in the same fall, the court heard.

A post-mortem examination found Elsie had previous and recent bleeding on both sides of her brain.

She had haemorrhages in both eyes, rib fractures and a fracture to her skull from an ‘impact to her head’, Mr Lewis told the jury.

On December 16 2015, while Mr Scully-Hicks was at work, Elsie sustained a bruise to the left hand side of her forehead.

A health visitor advised Scully-Hicks to take Elsie for treatment on December 21. He allegedly lied that he had done so.

On January 18 2016, Elsie suffered another bruise to her head.

Mr Scully-Hicks received a phone call from his husband on March 10, saying that he was in an ambulance with Elsie as she had fallen down the stairs.

He claimed to have been sorting washing in a bedroom, with Elsie on the floor, before going downstairs – closing the gate behind him.

‘He said he had then seen Elsie at the top of the stairs, that the baby gate had then opened and that Elsie had tumbled down the stairs,’ Mr Lewis said.

Mr Scully-Hicks was working in Leicester at the time but immediately headed to Cardiff, meeting the defendant at the University Hospital of Wales.

Elsie’s injuries were considered to be ‘consistent with a fall downstairs’ and she was discharged home after four hours in hospital, Mr Lewis said.

This was not something he was ever to tell his partner, hospital staff, or the police.

Then, on May 25 last year, Scully-Hicks phoned an ambulance telling an operator Elsie had become ‘floppy and limp’ while he changed her for bed.

Mr Lewis said: ‘Craig was again at work in Leicester, and the defendant was alone with Elsie and her sibling.

‘In the call Scully-Hicks told an emergency operator “I was just changing my daughter for bed and she went all floppy and limp, and now she’s not doing anything. She is lying on the floor”.

‘You will observe at no stage during the call did he suggest Elsie had suffered an accident, nor any trauma that might have caused her injury.’

Mr Lewis said police and paramedics arrived at the family home around 6.26pm and found an ‘upset’ Scully-Hicks, as well as Elsie having a cardiac arrest on the floor of a downstairs room.

Scully-Hicks allegedly told paramedics his daughter ‘screamed out as in pain, then collapsed’.

But Mr Lewis said: ‘This was not something he was ever to tell his partner, hospital staff, or the police.’

Elsie’s heart rhythm was restored at hospital, where scans showed bleeding on both sides of her brain – recent and older.

Her condition deteriorated a day after she was admitted to hospital, and two days later a decision was taken to switch off her ventilator as she was unresponsive and unable to breath herself.