The driver of a stolen fertiliser truck who crashed into a number of cars and buildings in Singleton, causing the vehicle to explode in flames, has left hospital under heavy police guard for questioning.

The 29-year-old man left hospital with a white sheet covering his body and face before being loaded into the back of a police van.

Police say he stole a truck from a service station as the driver paid for fuel – before crashing into the pub and a number of cars and exploding into flames in Singleton, north of Sydney, about 8.30am on Wednesday morning, critically injuring two people. 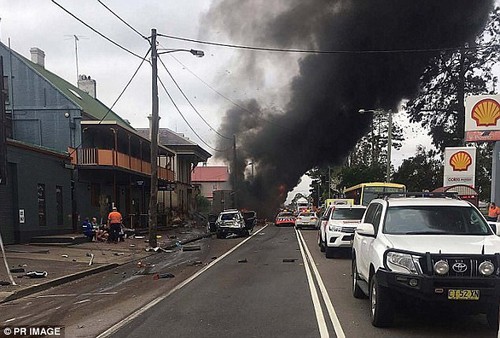 It comes after the truck driver, who is reportedly 29-years-old according to NBN News , stole a truck and erratically drove it through Singleton before the truck burst into flames 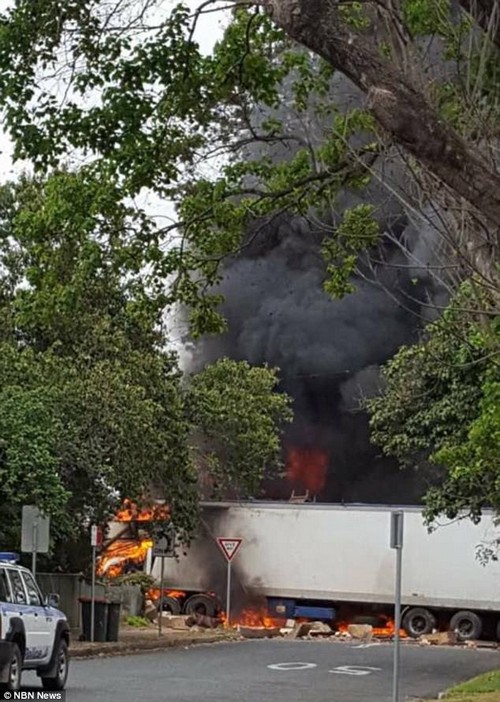 Debbie Anderson, 59, was on her way to work but was stuck in standstill traffic for at least ten minutes when she saw the semi-trailer (pictured) coming towards her 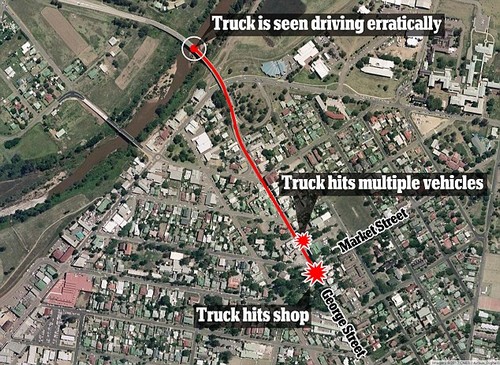 Debbie Anderson, 59, was on her way to work and was stuck in stand still traffic when she first saw the truck hurtling towards her.

‘I’d been thrown sideways… all I could see was smoke.’

A rouge driver had stolen the truck just moments earlier from a petrol station while the original driver of the truck was paying for petrol.

At about 7.30 Wednesday morning, the stolen truck crashed into a number of cars and buildings before catching fire in Singleton, north of Sydney. 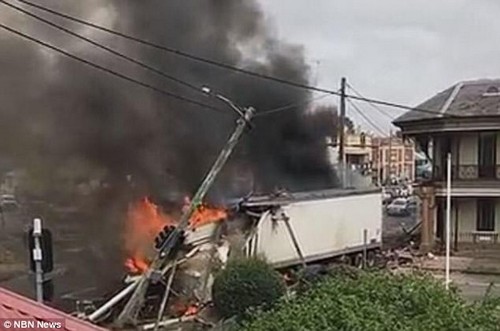 Ms Anderson said the stolen truck crashed into a car which crashed into her car, throwing her sideways and all she could see ‘was smoke’ (pictured) 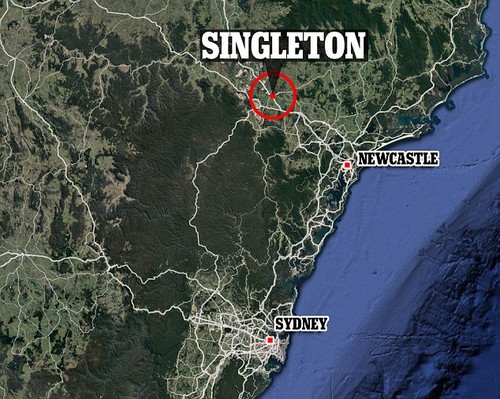 ‘It was like something that you’d see on the movies,’ Ms Anderson said.

‘I don’t even know how fast he was travelling, he was absolutely flying.

‘I was in complete disbelief.’

After the ‘wavering’ truck crashed into her car, along with several others, the 59-year-old said she forced the car door open and went to safety at a nearby cafe.

‘I could see dust and didn’t know if it was smoke,’ Ms Anderson said.

‘Obviously you could see the flames and the popping.’

Escaping with bruises to her forearms and legs after the ‘full on jolt’, Ms Anderson said the truck ended up about 100 metres away from her car before it burst into flames.

The grandmother described the cars in standstill traffic as ‘sitting ducks’ with no where to escape. 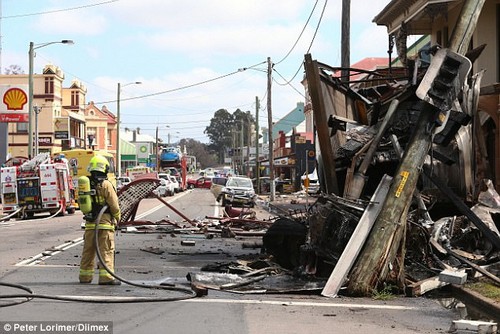 A rouge driver had stolen the truck just moments earlier from a petrol station while the original driver of the truck was paying for petrol before causing carnage on Singleton, north of Sydney 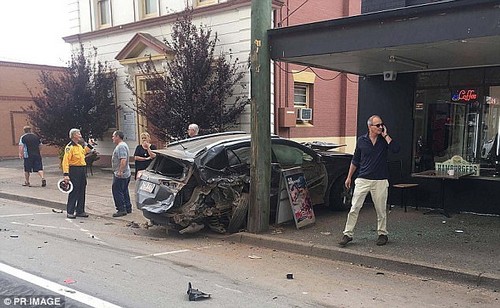 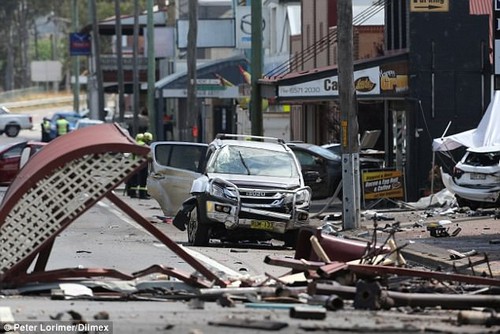 ‘I don’t even know how fast he was travelling, he was absolutely flying,’ Ms Anderson said

‘There’s only one way in and one way out over that bridge,’ Ms Anderson told Daily Mail Australia.

‘If they knew what was coming why didn’t they sit us in the side streets.’

The grandmother was taken to hospital for x-rays and has since been discharged, making her feel pretty lucky she wasn’t worse off.

Ms Anderson was one of at least eight injured in the terrifying crash, which has left two people in a critical condition in hospital.

Ms Anderson was one of at least eight injured in the terrifying crash, which has left two people in a critical condition in hospital

Other eye-witnesses have described seeing the semi-trailer travelling at 100km/h down the main street of the country town before ploughing into four cars and bursting with thick black smoke.

Witness Meri Basci told Daily Mail Australia she was on her way to work when she saw the truck being driven ‘erratically’ over the bridge before it crashed and burst into flames.

‘I saw a lot of dust under his wheels… it all happened so fast,’ Ms Basci said.

‘I couldn’t even understand how he could drive that fast over the bridge without hitting anyone or anything.

‘A second later all I could hear was a big bang and a lot of black smoke.’

‘Some cars have been taken out by the truck,’ Mr Storey said.

‘He’s caused it all. When he crashed, he got out of his truck and tried to get into another truck.’

NSW Ambulance Inspector Luke Wiseman said it was ‘chaotic’ when they first arrived before 9am with a number of ‘distressed people’.

A 64-year-old man is in a critical condition with head and chest injuries and was airlifted to John Hunter Hospital.

Two people are in a critical condition, a 67-year-old man and a 62-year-old woman

A 62-year-old woman is also in a critical condition with pelvic and hip injuries.

‘The scale and suddenness of the incident and the fact that is has happened in a smaller community means a lot of people are in shock, so it was a challenging scene,’ Mr Wiseman said.

Huge blankets of black smoke could be seen and one witness reportedly said there was a ‘huge fireball’ with cars ‘all over the road’.

The truck was seen driving erratically along the New England Highway through Muswellbrook towards Singleton before police deployed road spikes to stop the truck near the town’s centre.

The driver was arrested at the scene.

A critical investigation has been launched following the fiery accident.