The US Air Force has flown two bombers over the Korea peninsula despite warnings by North Korean dictator Kim Jong-Un to shoot them down.

Two US B-1 bombers carried out a training exercise today with Japanese and South Korean military aircraft in the vicinity of the Sea of Japan, the U.S. military said, amid growing tension over North Korea’s missile and nuclear programs.

It was first time US Pacific Command B-1B Lancers have conducted combined training with Japanese and South Korean fighter aircraft at night, the US military said in a statement.

It was first time U.S. Pacific Command B-1B Lancers (shown in a file photo above) have conducted combined training with Japanese and South Korean fighter aircraft at night, the U.S. military said in a statement 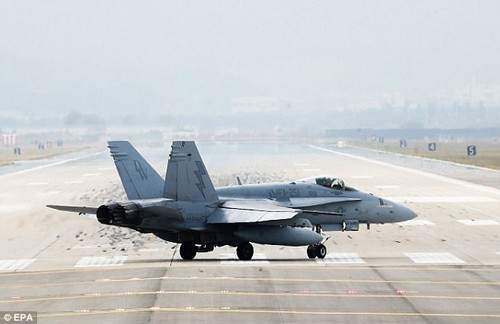 The South Korean military said this was part of a regular exercise to bolster military defences and also to display the alliance between the United States and South Korea. Pictured: An F/A-18 fighter at Osan Air Base, south of Seoul, South Korea, yesterday 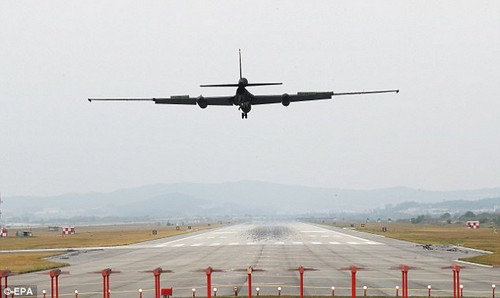 After entering South Korean airspace, the two bombers carried out air-to-ground missile drills in waters off the east coast of South Korea, then flew over the South to waters between it and China to repeat the drill, the release said.

The South Korean military said this was part of a regular exercise to bolster military defences and also to display the alliance between the United States and South Korea.

The two B-1B bombers were accompanied by two F-15K fighters from the South Korean military after leaving their base in Guam, the South’s Joint Chiefs of Staff said in a news release.

US Air Force Major Patrick Applegate said: ‘Flying and training at night with our allies in a safe, effective manner is an important capability shared between the US, Japan and the Republic of Korea and hones the tactical prowess of each nations’ aviators.’

‘This is a clear demonstration of our ability to conduct seamless operations with all of our allies anytime, anywhere,’ the US release quoted him as saying.

The US bombers had taken off from the Andersen Air Force Base in Guam. In August, Pyongyang threatened to shoot intermediate range missiles towards the vicinity of Guam, a target frequently subjected to sabre-rattling from the North.

South Korean and U.S. government officials have been raising their guard against more North Korean provocations with the approach of the 72nd anniversary of the founding of North Korea’s ruling party, which fell on Tuesday.

North Korea has launched two missiles over Japan and conducted its sixth and biggest nuclear test in recent weeks in defiance of U.N. sanctions as it races towards its goal of developing a nuclear-tipped missile capable of hitting the United States.

The North Korean party anniversary passed without any missile launches or nuclear tests, but officials are wary the North could engage in more provocations at any time, especially with China to begin its all-important Communist Party Congress on October 18.

At the end of last month, North Korea’s foreign minister Ri Yong-ho said that the US had ‘declared war’ on the authoritarian state and was ‘right’ to shoot down American planes.

He explained: ‘Since the United States declared war on our country, we will have every right to make countermeasures, including the right to shoot down United States strategic bombers even when they are not inside the airspace border of our country.’ 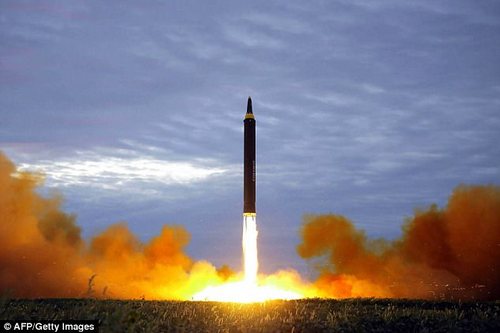 Pictured: North Korea’s intermediate-range strategic ballistic rocket Hwasong-12 lifting off from the launching pad at an undisclosed location near Pyongyang. North Korea has threatened to fire nuclear missiles at the United States and its allies

It comes after reports that North Korean hackers stole hundreds of classified military documents from South Korea including detailed wartime operational plans involving its US ally.

Rhee Cheol-Hee, a lawmaker for the ruling Democratic party, said the hackers had broken into the South’s military network last September and gained access to 235 gigabytes of sensitive data, the Chosun Ilbo daily reported.

Among the leaked documents was Operational Plans 5015 for use in case of war with the North and including procedures for ‘decapitation’ attacks on leader Kim Jong-Un, Rhee said.

Victim says Harvey Weinstein asked her out after assualt