Regularly enjoy tucking into a steak? Need to lose a few pounds? Or do you have type 2 diabetes?

If you answered yes to one or more of those questions then you could be at increased risk of bowel cancer.

The fourth most common cancer in the UK (after breast, prostate and lung) with around 41,000 cases diagnosed each year, bowel cancer was once thought of as a disease of old age.

However growing numbers of young people are being diagnosed with it, too.

Recent research published in the Journal of the National Cancer Institute found that those born between 1980 and 1995 are four times more likely to develop the disease than those born around 1950.

Yet as Colin Rees, professor of gastrointestinal endoscopy at Durham University and vice president of the British Society of Gastroenterology, explains, there are steps you can take: ‘About half of all bowel cancer cases in the UK could be prevented through being a healthy weight, eating well and being physically active.’

It’s estimated that 13 out of 100 bowel cancers in the UK are linked to being overweight or obese. It is probably due to inflammation caused by weight gain. Mike Johnson’s (pictured, 47) situation is not helped by alcohol

MIKE SAYS: My work involves driving around 75,000 miles a year, and sitting at a desk. I used to be in the armed forces and was super fit, but when I left four years ago the weight started piling on.

At the weekend I can get through ten pints, a few gin and tonics and some wine. We eat meat most nights but it tends to be poultry.

I also have ulcerative colitis – where the colon becomes inflamed. It’s controlled with medication but I get flare-ups, so I keep my diet bland – eating white bread rather than harder to digest wholemeal.

EXPERT VERDICT: It’s estimated that 13 out of 100 bowel cancers in the UK are linked to being overweight or obese. It is probably due to inflammation caused by weight gain. Mike’s situation is not helped by alcohol.

He should reduce his intake to no more than 14 units each week. He also needs to take more exercise – ideally 30 minutes a day. It helps you avoid gaining weight and so reduces the risk of bowel cancer.

Ulcerative colitis increases the risk of bowel cancer, particularly if it is poorly controlled, because it can damage the colon. Taking medication reduces the risk.

Mike should make sure he takes up the offer of a flexible sigmoidoscopy, where a camera is used to examine the colon – this NHS screening programme is being rolled out to people in England as a one-off at the age of 55.

It’s used to look for polyps or growths in the lining of the bowel which could turn into cancer.

MIKE’S REACTION: I have a colonoscopy every two years because of my colitis so though I’m a little shocked it’s a risk factor for bowel cancer, at least I’m being looked after. I know I should lose about a stone and cut down on the alcohol. But you have to live life!

Even though Lee Black, 44, (pictured) is only a weekend drinker, she drinks quite a bit and should limit her intake

LEE SAYS: I’ve taken up weight training, which I do twice a week, as well as boxing once a week. I walk six miles a day on weekdays and nine miles a day over the weekend. Recently I started a diet high in protein and low in carbohydrates – no bread or pasta – but lots of veg. In eight weeks I’ve lost ten pounds.

I do have my vices, though. Until January this year I smoked 15 cigarettes a day. Now I’m a social smoker, having maybe three or four a week, and I like a drink at the weekend – probably the equivalent of half a bottle of Jack Daniel’s.

There’s no cancer in my family history and I take no medication, although I have used the contraceptive Pill since I was 18.

EXPERT VERDICT: Lee’s risk is low but it would drop further if she gave up smoking altogether.

Research has found that women who take the Pill while young are at lower risk of bowel cancer more than three decades later – though the link isn’t clear.

Even though Lee is only a weekend drinker, she drinks quite a bit and should limit her intake. She needs more fibre – at least 30g every day. Brown rice, nuts, seeds, potatoes in skins and dried figs are all good sources.

LEE’S REACTION: It’s remarkable that the Pill could be protective. I now intend to quit those last few cigarettes. As for the fibre, I do love potato skins – so I suppose it’s doctor’s orders to eat them! 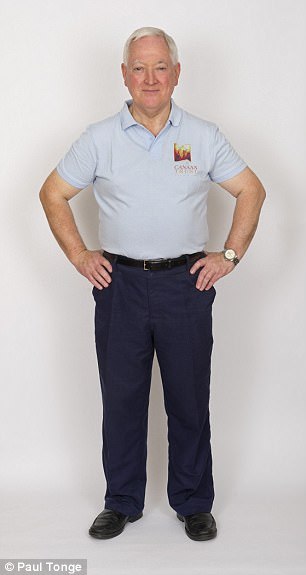 Kevin Curtis, 66, is in the age group where bowel cancer starts to become more common. He is at increased risk as a man and is overweight

Kevin Curtis, 66, a project manager for a charity for the homeless, lives in Derbyshire. He is divorced with two children. Height, 5ft 8in; weight, 14st; BMI, 29 (overweight)

KEVIN SAYS: Being diagnosed with type 2 diabetes ten years ago came as a shock. I was only a few pounds overweight. I was put on medication and cut out sweets and chocolates. These days I also avoid fast food. My biggest issue is my job. I get to work at 7.30am and work 12 hours or more. But I try to cook from scratch. I don’t eat much red meat – maybe two portions a week.

I’m not a smoker and drink only two to three units a week. I try to get to the gym a couple of times a week.

EXPERT VERDICT: Kevin is in the age group where bowel cancer starts to become more common. He is at increased risk as a man and is overweight.

What’s more, bowel cancer risk is 22 to 30 per cent higher in people with type 2 diabetes, compared with those without the condition – the link is probably due to weight gain. It is helpful that he doesn’t usually eat processed foods.

He should have been tested as part of the NHS screening programme: this is offered every two years to those aged 60 to 74 and involves a faecal occult blood test (you’re sent a home test kit to collect a stool sample).

KEVIN’S REACTION: I did get a screening kit from the NHS recently but I set it aside as I’m so busy. I didn’t realise having type 2 diabetes raised my risk. I will certainly do the test now.

VEGAN WITH A FAMILY HISTORY 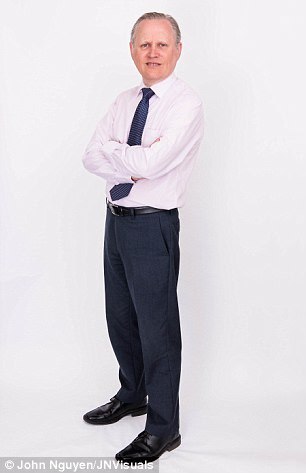 The risk of bowel cancer rises with family history, particularly if it’s a first-degree relative, such as a parent or sibling such as in Brian Jacob’s case (pictured, 62)

BRIAN SAYS: My father died of bowel cancer when he was 59 so I’ve always been aware of the disease and try to look after myself. I’ve been a vegan for 30 years, as much for ethical reasons as health.

Dad was a smoker and suffered a lot of work stress.

I never smoked and meditate if I feel stressed.

I only drink occasionally.

I run for half an hour a couple of times a week, and I walk as much as I can.

I get a fair amount of fibre from wholewheat bread and brown rice. The worst thing I eat is processed food such as veggie burgers.

EXPERT VERDICT: The risk of bowel cancer rises with family history, particularly if it’s a first-degree relative, such as a parent or sibling. In general, bowel cancer affects more men than women and the chance of developing it increases over the age of 50. So Brian does have clear risk factors.

However, he is doing his best to keep healthy. His diet as a vegan includes whole grains, pulses, vegetables and fruit, so he’ll be eating a lot of fibre, needed to keep the digestive system healthy.

He should participate in the NHS screening programmes.

But he should also stay vigilant for symptoms which can be a sign of bowel cancer: rectal bleeding, blood in stools, a change in bowel habit lasting three weeks or more; extreme tiredness for no obvious reason; unexplained weight loss or a pain or lump in the stomach.

BRIAN’S REACTION: I’m not surprised that my family history raises my risk. I appreciate that I need to be vigilant – I took part in the NHS screening programme a couple of years ago.