The death toll in the bushfires raging across Australia’s New South Wales (NSW) state has risen to four after a man’s body was found in a scorched forest, as authorities warned on Thursday of worsening weather conditions to come.

The fires have destroyed about one million hectares (2.5 million acres) of farmland and bush over the past week, fuelled by tinder-dry conditions and high winds after three years of drought that experts say has been exacerbated by climate change.

The man’s body was found late on Wednesday near the town of Kempsey in northeast NSW.

He is suspected to be a 58-year-old man who had not been seen since Friday.

“The man is yet to be formally identified, however, it’s believed to be the body of a 58-year-old man who lived in a shed nearby,” NSW Police said in an emailed statement.

Kempsey is just over 400km (249 miles) north of Sydney, Australia’s biggest city and has suffered under extreme conditions in recent weeks.

Some 300 homes have been destroyed in NSW alone in recent days as flames stretched from the state’s north down the coast to suburban Sydney.

Bushfires are common in Australia’s hot, dry summers, but the ferocity and early arrival of the fires in the southern spring this year has caught many by surprise.

About 60 fires were burning around NSW on Thursday morning while being battled by more than 1,000 firefighters, the Rural Fire Service said. 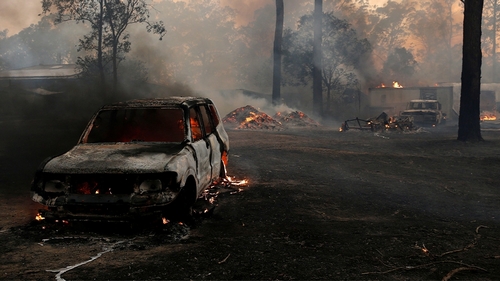 Fires have started even before the start of Australia’s summer, sweeping through communities in the most populous state of New South Wales. Darren Pateman/AAP Image via Reuters

“We had a better day yesterday, only one fire got to emergency warning, but even in these pretty benign conditions we’re seeing quite a lot of aggressive fire behaviour simply because it’s so dry,” Rural Fire Service Deputy Commissioner Rob Rogers told the local television channel, Seven Network.

“Conditions starting to warm up tomorrow, into the weekend and then heating up early next week, a return to more gusty conditions. We’re in for the long haul,” he added.

Temperatures are also forecast to soar on Thursday in the west of the country.

Authorities said they were monitoring a fire on the outskirts of Karratha, a major gas-processing hub on Australia’s west coast. Temperatures are forecast to hit 43 degrees Celsius (109.4°F) on Thursday in nearby Port Hedland.

The annual Australian fire season, which peaks during the Southern Hemisphere summer, has started early after an unusually warm and dry winter.