MICROSOFT WORDS: It’s been three years since Satya Nadella replaced Steve Ballmer as chief executive of Microsoft – just long enough, it seems, to write a book, “Hit Refresh,” all about how Nadella is a different kind of leader running a different kind of company. 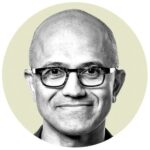 “It’s not that we had lost our soul,” Nadella writes (dubiously, in a book whose subtitle invokes the “Quest to Rediscover Microsoft’s Soul”), “but we needed renewal, a renaissance.” Elsewhere he sounds like a bummed-out consultant: “Employees were tired. They were frustrated. They were fed up with losing and falling behind. …

They came to Microsoft with big dreams, but it felt like all they really did was deal with upper management, execute taxing processes and bicker in meetings.” In other words, they were shocked to find they worked in corporate America.

To be fair, Nadella really has changed the company’s focus – to artificial intelligence, among other things. But employees who were already tired of dealing with upper management might not be overjoyed that Microsoft is presenting every full-time worker with a special edition of the boss’s book, complete with highlighted passages and faux-handwritten jottings in the margins. One of these, on the cover, modifies the title “Hit Refresh” with the notation “FN + F5,” which was too much for the irreverent tech website The Register (slogan: “Biting the hand that feeds I.T.”). “Presumably,” one editor wrote, “Microsoft people are more comfortable speaking in keyboard shortcuts, not English.” Nadella’s book enters the hardcover nonfiction list at No. 5.

UNDEVELOPED: Denise Kiernan’s “The Last Castle” – new in hardcover nonfiction at No. 11 – uses the vast Biltmore House in Asheville, N.C., as a lens to view the Gilded Age lives of George and Edith Vanderbilt, who created the estate. “But I think what they didn’t build here also had a tremendous impact,” Kiernan told The Asheville Citizen-Times. “I think about the efforts that went into restoring lands, restoring forests, doing the best they could not to have them all sold off piecemeal. What that has done is create the incredibly well-preserved, beautiful place that we all live in.”

FAMILY BUSINESS: “Sleeping Beauties,” the new novel by Stephen King and his son Owen King, jumps right to No. 1 in its hardcover fiction debut. The Kings join Clive and Dirk Cussler (“Odessa Sea”) and W.E.B. Griffin and William E. Butterworth IV (“Broken Trust”) as other recent father-son teams on the list.

Nonfiction: What a Survivor of Auschwitz Learned From the Trauma of Others