The partying started in 1932, as soon as the house was habitable, with an outdoor luncheon for 50 people. Over the next few years, the entertaining was lavish and incessant. Elliott didn’t like to be alone, and rarely was. In the years between the wars, she became something of a den mother to the brightest of the Bright Young Things, presiding over an endless round of “swimming parties, luncheon parties, dinner parties, bridge parties, cocktail parties; any kind of event that would give pleasure.”

Maxine Elliott wasn’t a fool, but she suffered fools enthusiastically – even joyously. Despite being, by many accounts, both thoughtful and generous, she regularly played host to snobs, airheads, bigots and a walking Page Six of the most frivolous boldface names. The Irish-American journalist Vincent Sheean, who was married to Elliott’s niece, wrote of listening in amazement as her neighbors, the Duke and Duchess of Windsor, pontificated on the conditions of poor Welsh mining families and “the more favorable conditions” for miners in Nazi Germany: “In the exquisite little room, gleaming with glass and silver over the flowers and champagne, all so enclosed and private and secure … what did they have to talk about but the dirt on a miner’s neck?”

Sheean wasn’t the only censorious guest. By all accounts, Winston Churchill’s wife, Clementine, found the company at the Château de l’Horizon raffish and vulgar. She may also have associated it with Maxine’s gossip about some of the less edifying episodes linked to the Churchills’ rootless son. (A scandal involving Randolph Churchill, Diana Mitford, Tom Mosley, Evelyn Waugh, Cecil Beaton and Doris Duke – several of whom were romantically entangled – led to a brawl that made international headlines.) Winston Churchill, however, adored the chateau and spent a good deal of time painting and relaxing there during his years of exile. Maxine attended to his every whim and crotchet, never lost faith in his brilliance or potential, and delighted in surrounding him with exactly the sort of frivolous company his wife abhorred.

Lovell, who has also written entertaining biographies of, among others, the Mitford and Churchill families, knows how to render sly appraisals of her often complicated subjects. For long stretches, neither the book nor the mansion plays host to anyone who isn’t horrible, or at least very silly, so it’s a testament to Lovell’s charm and skill that, much like the Château de l’Horizon’s chatelaine, she’s able to show even the most judgmental reader a good time

She’s especially adept at conjuring the fizzy, rootless quality of life on the Riviera, where aristocrats, parvenus, courtesans and world leaders could freely mingle – “a sunny place for shady people,” as Somerset Maugham put it. Many of the denizens of the chateau were exiles of some kind, be it political or social outcasts like Churchill and the Windsors or those – like Elsie de Wolfe, Elsa Maxwell and indeed Elliott herself – who had reinvented themselves.

This continued to be true even after Maxine’s death in 1940. Although the fun slackened considerably under the German occupation, the good times resumed when the villa was inhabited, post V-E Day, by the American millionaires Norman and Rosita Winston. In a country ravaged by years of privation and death, the Winstons’ brief tenure – fueled by black-market food and liquor – was distasteful. Their specialty was movie stars, with a sideline in impoverished aristocrats, and they regularly entertained so many guests that the overworked staff threatened to rebel. “The most striking thing,” one observer noted, “was the virtual extinction on this coast of the once-swarming British peer – a phenomenon so startling in scope as to recall the famous disappearance of the passenger pigeon.”

It’s perhaps fitting that the chateau’s final turn in the spotlight should come as a result of actual royalty joining with that of Hollywood, thanks to its new owner, Prince Aly Khan. The eldest son and presumptive heir to the Aga Khan, the immensely wealthy leader of the second-largest branch of Shia Islam, Aly was an international playboy par excellence. With his girlfriend Pamela Churchill as unofficial hostess, he entertained on as grand a scale as any of his predecessors. And it was on the Riviera that he first met Rita Hayworth, at that time one of the biggest movie stars in the world. Before they could marry, Aly had to divorce his estranged wife, Hayworth had to end her marriage to Orson Welles and convert to Islam, and several former girlfriends had to depart. (Luckily, by this time Pamela Churchill had taken up with the Fiat heir Gianni Agnelli.) Nevertheless, in late May of 1949 newsreels around the world featured the beaming couple, surrounded by cheering crowds, leaving the local mairie. The reception was predictably lavish: More than 600 bottles of champagne, at least 50 pounds of caviar and 10 bottles of eau de cologne (to perfume the swimming pool) made for what Lovell calls “easily the most grandiose wedding ever held on the Riviera.”

The wedding was an accurate predictor of their future life, in which the Château de l’Horizon was invaded by a steady stream of celebrities and hangers-on. By 1951, the marriage was, to all intents and purposes, over, and Aly’s womanizing continued apace. A few years later, after his disapproving father’s death, it was revealed that Aly had been passed over in favor of his son, Karim. When Aly died in a car crash outside Paris, his body was interred at his Riviera home, where it remained for over a decade before being moved to a mausoleum in Syria.

The Château de L’Horizon is now the property of the Saudi royal family, who have expanded and altered it almost beyond recognition. Or so, at least, Lovell speculates based on long-distance photographs. Because it’s now heavily guarded, she has never set foot in the house she brings so vividly to life.

Nonfiction: The 20 Years That Made New York City 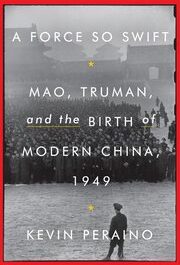 1949: The Year That Set the Course of Chinese-American Relations

Chernobyl: History of a Tragedy by Serhii Plokhy review – death of the Soviet dream