This book provides a series of Pomerantsev’s datelined dispatches from those myriad conflicts, “the digital Maginot Line”. It is required – and bleakly entertaining – reading for anyone wanting to understand the surreal scale and intent of the efforts to destabilise democracies.

The great crisis of our political moment is that of vantage: where do you stand to get a reliable view of reality? Extremisms, which seek deliberately to degrade the objectivity and balance on which clear-eyed reporting are based, advance largely out of plain sight, in the global no man’s land of social media. From this shifting frontline, Peter Pomerantsev is emerging as the pre-eminent war reporter of our time, the Martha Gellhorn or Ed Murrow of the brutal campaigns against fact.

Pomerantsev’s “adventures” take him from a skyscraper in Manila – where he meets the boyish Facebook manipulator who first shaped the murderous rise to power of President Rodrigo Duterte in the Philippines – to the vast “International Research Agency” in St Petersburg, and the testimony of “Lyudmilla”, the whistleblower who exposed the industrial level of Russian efforts to drive western political sentiment to tribal extremes (including whole nine-to-five departments dedicated to injecting vitriol into the comment sections of British and American news sites).

He meets heroes of online resistance – Srdja Popovic in Belgrade, who offers “training courses that allow activists everywhere to pass exams in how to overthrow dictators without firing a shot”, and the delegates of the annual gathering of the world’s fact-checkers in Rome. He also confronts their nemeses, from the “bot-herders” in Nizhny Novgorod promoting far-right memes, to the Etonian Nigel Oakes, founder of the company behind Cambridge Analytica, which infamously employed research into online “behavioural dynamics” to shape populist election campaigns.

Pomerantsev punctuates his investigations with fragments of memoir, which illustrate the fact that he was, in many ways, born to his current role. The writer’s father, Igor, was a Ukrainian poet and novelist, arrested by the KGB for distributing “harmful literature” in the 1970s and eventually exiled to London, where he became an important voice in the Russian department at the BBC World Service. His mother, Lina, who had shared her husband’s courageous free-speech activities, subsequently produced documentaries about the legacies of the Soviet police state, including the award-winning Gulag.

Pomerantsev himself was born during a respite between KGB interrogations in 1977. He was subsequently a pupil at Westminster school, a different kind of make-believe, and then a boarder in Munich at one of nine “European Union” schools, designed to promote continental harmony. He lived in Moscow during the Yeltsin years, working in TV, where he gained an insider’s view of how Russian media were manipulated to advance the power of Vladimir Putin. These insights were the substance of his illuminating, terrifying first book, Nothing Is True and Everything Is Possible. 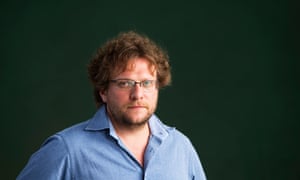 Peter Pomerantsev: ‘the pre-eminent war reporter of our time, the Martha Gellhorn of the campaigns against fact’. Photograph: Murdo Macleod/The Guardian

In the course of his autobiographical notes here, Pomerantsev remarks how he returned to London in 2010 in part for the psychological necessity of getting away from a world “where spectacle had pushed out sense”. In fact, of course, he returned to more of the same. What he had observed in Russia, “a radical relativism” with “conspiracy replacing ideology, facts equating to fibs, conversation collapsing into mutual accusations that every argument is just information warfare… and the sense that everything under one’s feet is constantly moving, inherently unstable, liquid” also began to characterise British politics.

He quickly saw how the methodologies that brought Putin to power had been exported, finding their expression first in Brexit and then in the election of Trump. Gleb Pavlovsky, one of the principal architects of Putin’s rise, explains to the author at one point how, in the absence of the old ideologies, the aim became “to lasso disparate groups together around a new notion of ‘the people’, bound around an amorphous but powerful emotion which everyone can interpret in their own way, and then sealed with enemies who will threaten to undermine that feeling”. Instead of a rational project directed toward the future, the aim was to offer the people “emotional highs” and sloganeering based in vague and unsupported nostalgias. The local equivalent of “Make America great again” or “Take back control” was “Bring Russia off its knees”.

Pomerantsev offers compelling fine detail of the ways in which social media campaigns would stoke fears about threats to a national way of life and offer simplistic solutions. These campaigns, automated and relentless, as well as cynical and blunt, were never designed to change thinking through argument but rather to change the environment in which arguments are made. “It is not the case that one online account changes someone’s mind,” Pomerantsev notes. “It is that en masse they create an ersatz normality.”

The old normal was rooted in a belief that the truth was out there if one did enough hard looking, while “ersatz reality” attempts to extend the notion of subjectivity into all realms of knowledge. In this new world, as we have seen, inconvenient facts are routinely dismissed as propaganda, fake news; nothing is but what is not. As the pattern of Pomerantsev’s own life proves, none of us is exempt from a singular point of view, and each of us is shaped by the place we fell to Earth; but crucially, pointedly, that does not make all versions of the world equally credible. At one point in this quest, Pomerantsev faces up to the still surprising reality that political “lies are not illegal”; however, as his important and timely book demonstrates, that does not begin to make them true.