London, United Kingdom – Boris Johnson, a leading right-wing politician with a history of making racial slurs around the world and upsetting ethnic, religious and sexual minority communities in Britain, is the favourite to become the next prime minister.

And as the Conservative Party leadership race tightens, his past comments have come back to haunt him.

Johnson becoming PM would be “a disaster for minorities”, according to David Lammy, an MP for the main opposition Labour Party and an equal rights campaigner.

“Not only did he play a leading role in the 2016 Leave campaign (for the Brexit referendum), which whipped up fear of foreigners and led to a rise in hate crimes, in the past Johnson has referred to black people as picaninnies, mocked Muslim women as letterboxes and bank robbers and referred to gay men as bumboys.”

Confronted over his comments about Muslim women at a leadership launch event, Johnson remained unrepentant.

“The public feels alienated from us all as a breed of politicians because too often they feel we are muffling and veiling our language. I will continue to speak directly,” he said.

When recently asked on the BBC specifically over his comment likening Muslim women wearing the full veil to letterboxes – a remark he made in his column for The Telegraph, he dodged the question.

“In so far as my words have given offence over the last 20 or 30 years when I have been a journalist and people have taken those words out of my articles and escalated them, of course, I am sorry for the offence they have caused.”

What’s happening in the UK?

The race to lead the ruling Conservative Party heated up when Theresa May announced her resignation on May 24. She was under pressure over her failure to deliver Brexit on time – by the March 29 deadline.

She will remain prime minister until a successor has been chosen. Conservative MPs whittled a large list of candidates down to just two in a series of votes – Boris Johnson and Jeremy Hunt.

Both candidates have widely different views on Brexit.

The Conservative Party members – about 160,000 people – will now decide who will head the party.

The candidate with more than 50 percent of the vote will be announced as the winner in the week of July 22.

On the subject of Islamophobia, of which he is regularly accused, he said: “When my Muslim great-grandfather came to this country in fear of his life in 1912, he did so because he knew it was a place that was a beacon of hope and of generosity and openness, and a willingness to welcome people from around the world.”

Johnson’s paternal great-grandfather was a Turkish journalist and politician.

And on Sky News, he said writing about black people with “watermelon smiles” was done in a “wholly satirical way”.

The MP’s rhetoric, however, led to a rise in Islamophobia, according to Fiyaz Mughal, who runs Tell MAMA, a hate-crime monitoring organisation.

“Words have impact and Tell MAMA picked up cases directly related to comments made against them which stated the term letterbox,” he told Al Jazeera.

“I have some trepidation about a Boris Johnson premiership, not because he is unable to make Brexit happen, but because he seems to say things that don’t bring communities together.”

Although Mughal doesn’t believe that Johnson is bigoted or prejudiced, he wants the politician to address his previous use of offensive language and consider his words more carefully.

“If Boris wins, he needs to understand that there is some work to do to overcome his comments about ethnic minority communities.

“He also needs to realise that as PM, his words will have huge ramifications – he cannot use such terms in the future since they have an impact on the streets of our country.”

By the time of publishing, Johnson had not responded to interview requests from Al Jazeera.

Samayya Afzal, community engagement manager for the Muslim Council of Britain, worries about the effect a Johnson premiership could have on British Muslims – the largest religious minority of around 3.4 million people.

“Boris becoming the next prime minister is a scary thought, as he is one of the leading politicians in the Conservative Party who has used bigoted language,” she told Al Jazeera.

“This is against a backdrop of hundreds of examples of party Islamophobia, inaction on which can only suggest that the party, and the favourite prospective prime minister, both give licence to bigotry by escaping accountability.

“It will be a dangerous time for minority groups if Boris is elected PM.”

His political ascendance legitimises his bigotry and will strike fear into the hearts of minorities who are now under threat. Britain deserves so much better than this.

Yet despite his record of offensive statements, and no sign of real remorse, Johnson’s popularity remains strong.

In the last and deciding round of voting on June 20, Johnson received the support of more than 50 percent of Conservative MPs, with his opponent Jeremy Hunt describing himself as the “underdog” after the results.

While several equal rights campaign groups have been concerned about Johnson’s commentary, there is some backing among minorities for his bid to become PM.

Iran-born Mahyar Tousi, a 31-year-old Johnson supporter, said: “For far too long, we have had governments that have become bigger instead of giving power back to the people, but here we have a leader who is socially liberal, internationalist and economically pro free-markets.”

In his “letterboxes” column, while Johnson claimed it was “ridiculous” to wear the full veil, he said it should not be banned.

“He criticised banning the niqab and burqa, and defended the rights of women to wear whatever they want,” said Tousi. “He also criticised the anti-women mentality of some men in some cultures who force their family members to wear certain clothing.”

Tousi also believes that Johnson, who he describes as a relatable, plain-speaking character, made positive changes during his time as London mayor.

“He empowered minority groups by creating jobs and opportunities for them to thrive. And he’s always been surrounded by people from various backgrounds.”

Mughal also lauded Johnson’s time as London mayor, saying despite his growing list of blunders, “Boris can make a real change for the better.

Johnson is the bookmakers’ favourite to win the Conservative race, although his lead over Hunt narrowed in recent days following a domestic scandal – he was heard by neighbours rowing with his girlfriend and the incident was reported to the police.

The party leader is expected to be announced in the week of July 22, after a vote by about 160,000 Conservative members.

For Lammy, Johnson at the helm would be an injustice to British minorities and the country.

“His political ascendance legitimises his bigotry and will strike fear into the hearts of minorities who are now under threat,” he said. “Britain deserves so much better than this.” 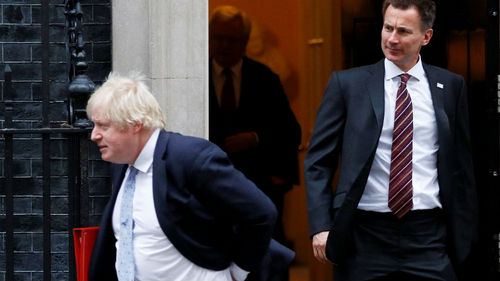