Opposition Labour Party leader Jeremy Corbyn has said the United Kingdom’s next prime minister must put their Brexit plan to a second referendum on membership of the European Union. 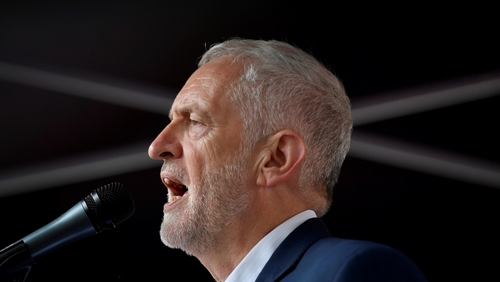 In a letter to party members on Tuesday, Corbyn said the new ruling Conservative Party leader and prime minister “should have the confidence to put their deal, or no-deal, back to the people in a public vote”.

Corbyn added that Labour would campaign to stay in the EU in the event of a second poll in order to stop the UK leaving the 28-member bloc without a divorce deal or to stop what he called a “damaging” Brexit.

“I want to make it clear that Labour would campaign for Remain against either no-deal or a Tory deal that does not protect the economy and jobs,” he said.

The move by Corbyn, a longtime critic of the EU, inches Labour closer to heeding demands from many of the party’s members and some legislators to unequivocally embrace a second referendum to break the impasse in Britain’s parliament over how to leave the EU.

But it might not be enough to satisfy all in his party, as it falls short of campaigning for a second referendum in any circumstance – a position some wanted to adopt to counter a challenge from the pro-EU, fellow opposition Liberal Democrats party.

Brexit has brought down incumbent PM and ruling Conservative Party leader Theresa May, who announced in May she would resign after failing three times to get the divorce deal she agreed with the EU ratified by parliament.

The two candidates in the running to replace her – Boris Johnson and Jeremy Hunt – have vowed to succeed where she failed and take Britain out of the EU, even if that means leaving without an agreement on divorce terms and future relations.

EU officials have repeatedly ruled out reopening negotiations on the divorce deal brokered during months of arduous negotiations with May’s administration.

Hunt and Johnson are due to square off on Tuesday evening in their only head-to-head debate in the campaign.

The winner of the contest will be decided by a poll of the party’s estimated 160,000 voting members and is due to take office later this month. That means the victor will have barely more than three months to negotiate and win support for a Brexit deal before Britain’s scheduled October 31 EU departure date.

Pollsters make Johnson, a former mayor of London, the strong favourite in the leadership race.

Most businesses and economists think a no-deal Brexit would plunge Britain into recession as customs checks take effect at UK ports and tariffs are imposed on trade between the UK and the EU. But many Conservatives think embracing a no-deal Brexit may be the only way to win back voters from the upstart Brexit Party led by Nigel Farage.

During a divisive referendum held in June 2016, the campaign to leave the EU won, with just less than 52 percent of the vote, while slightly more than 48 percent voted to remain in the bloc. Turnout for the poll was more than 72 percent of eligible voters.