London, United Kingdom – The frontrunner in the battle to become Britain’s next prime minister gained further ground against his rival in a television debate dubbed by one observer as “the madman versus the manager”.

Experts say that despite coming under pressure in an at times tetchy debate, Boris Johnson scored where it mattered – among the Conservative Party members whose votes are set to propel him into No 10 Downing Street.

Postal ballots went out four days ago to the 160,000 party members who are able to vote and, as many will have already done so, the debate is unlikely to be a game changer in the run up to the result on July 23.

Anthony Ridge-Newman, a senior lecturer at Liverpool Hope University and the head of conservatism studies in the UK, believes Johnson is set to win.

“I am very confident that most Conservative Party members will have already returned their ballot papers – they would have already made their decision and that would have probably been for Boris.

“After this debate, I would suggest that among party members who were undecided Boris has come out on top. I expect the polling we have seen that puts Boris strongly out ahead with two thirds of the vote will hold for the actual result.”

The debate on the ITV network was the first head-to-head between Johnson and his rival Jeremy Hunt, the foreign secretary, and comes after weeks of campaigning in which a large field of candidates was whittled down to two.

The winner will become the UK’s prime minister, replacing Theresa May, whose failure to secure backing for her Brexit deal on the terms of Britain’s withdrawal from the European Union sparked her resignation.

The campaign strategy of Johnson – a highly paid newspaper columnist whose florid language often gets him into trouble – has been to keep a low profile.

He has pledged to take the UK out of the EU on October 31 without a withdrawal deal – which economists say would be disastrous – raising fears among many MPs that there will not be enough time to prevent a messy exit.

In a debate in which he repeatedly interrupted his opponent, Johnson yet again refused to rule out “proroguing” parliament – dissolving it so that it cannot block a no deal Brexit – despite claims this week by a senior Conservative that such a move would “end” British democracy.

Hunt told the audience: “When in the past parliament has been shut down against its will we have actually had a civil war, and I think it would be a rather curious thing, if this is about taking back control for parliament, to actually shut it down.”

This display was as much clash of two very different characters as it was about policy differences, although some “clear blue water” – differing visions – can be found on the issue of taxation.

David Jeffery, a lecturer in British politics at the University of Liverpool who has studied the Conservative Party, compared Johnson’s refusal to rule out sidelining parliament to Hunt’s managerial emphasis. 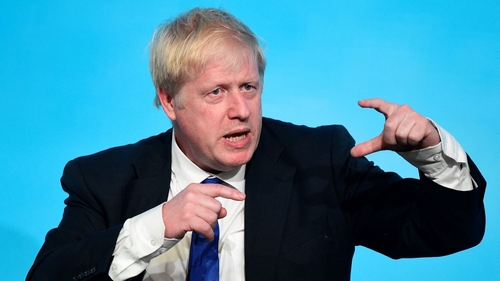 “It was like the madman versus the manager,” he said. “Boris came across as less of a details man: his plan is more vague – he kept on saying ‘optimism’ – but Hunt did come across as more of an ideas man.”

However, Jeffery indicated that there may be method in the frontrunner’s madness.

First, Johnson was aiming to associate Hunt with the discredited politics of both May and her predecessor David Cameron by stressing his rival’s managerial style.

Secondly, although the EU has repeatedly said it will not renegotiate the Brexit deal it reached with May, Johnson’s strategy is to maintain the threat that the UK will walk away without a deal on October 31 in order to force its hand.

Jeffery said: “Boris seems to be like Richard Nixon with China – it’s the madman approach.

“The other side needs to think he will do anything and they can’t predict what he will do and that’s how you get the best result from the negotiations. Especially if they think you are serious about no deal.”

Ridge-Newman said that Johnson came out strongest on two of the key areas touched on in the debate – Brexit and the economy.

“Although Boris is weaker on personal attributres he is very good at entertaining people and making a joke and bringing people on side and that is also a quality that appeals to a significant portion of the Conservative Party who are voting for these two people.”

While Hunt came across better than expected, polling has given Johnson a clear lead since the start of the campaign and both Ridge-Newman and Jeffery believe this latest clash is unlikely to change the expected outcome of a Johnson victory.

Ridge-Newman said that he had been watching the social media activity of Conservative members closely.
“From where I’m sitting and watching, and from those that I am talking to and observing, the majority of members are out and out by far supporting Boris.”

Eamonn O’Domhnaill, 48, a finance manager from Ireland, was unimpressed with both candidates.

“I don’t believe Boris Johnson is taking this seriously – there has been far too much buffoonery,” he said.

While Hunt has stressed his credentials as a former entrepreneur, O’Domhnaill said: “I don’t want an entrepreneur running the country, I want a politician who can bring people together.”

He is particularly concerned about the implications of a no deal Brexit for the border between Northern Ireland and the Irish Republic.

“I don’t think the answers with regard to Northern Ireland were sufficiently detailed and I do feel that throughout this entire process issues surrounding the border and the Good Friday peace agreement have not been discussed enough.”

‘Boris blimp’ at London rally as thousands march against Brexit