United Kingdom Prime Minister Boris Johnson’s bid to win parliamentary support for his revised Brexit withdrawal deal is poised on a knife-edge before “super Saturday”, when British MPs will take part in one of the more significant votes in recent UK politics. 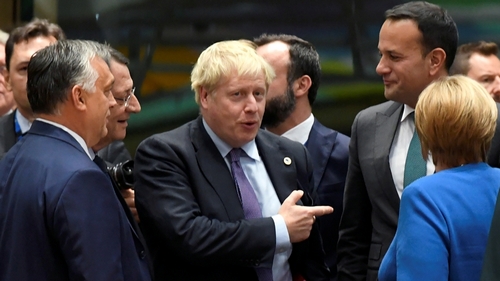 All bets are off after the prime minister spent Friday horse-trading for support after reaching a deal with the European Union to ensure the UK exits the bloc on the October 31 deadline – seemingly removing the threat of a “no-deal” departure that economists say would be disastrous.

Johnson insists he is confident of winning the rare Saturday sitting, but a handful of votes could decide the outcome in a deeply divided parliament.

Although Brexit fatigue will likely influence how many vote, hardline Brexiters say a “no-deal” scenario remains possible even if they back a deal.

Conservative John Baron told the BBC that if trade talks with the EU during a Brexit transition period are unsuccessful, the UK would proceed on “no-deal” terms that merely obey World Trade Organization tariff rules.

David Jeffery, a lecturer in British politics at the University of Liverpool said: “The withdrawal agreement is about the next step – but not a destination in terms of the UK’s future relations with the EU.

“The most important thing about this Baronite argument is that once we have left, we’ve left – legally we are a third party, so if the UK decides to walk away from negotiations, we would be legally allowed to do so.”

David Phinnemore, professor of European politics at Queen’s University Belfast, believes Baron’s argument could be a factor limiting support for Johnson’s deal among MPs tempted to vote for any kind of deal after two years of divisive delays.

“Can we really say that 48 hours is enough time for parliamentarians to really sit down and work through what the implications of the agreement are and consider their respective positions?” he said.

“This has been pushed through very quickly and probably without due cognizance being taken of the likely impact of the deal.”

German Chancellor Angela Merkel piled further pressure on Johnson by offering a lifeline to his opponents – telling other EU leaders that a second Brexit extension is unavoidable if MPs ditch his plan.

A surprise amendment by the Conservative Oliver Letwin would force the PM to ask for a delay to Brexit even if MPs vote for his deal.

Several groups of MPs have become the main focus of attention in Saturday’s vote.

Johnson has lost the backing of Northern Ireland’s small Democratic Unionist Party – whose support has kept the ruling Conservative Party in government since 2017 – which rejects the compromise he made in Brussels on its customs status.

Johnson has instead wooed hardline Conservative Brexiters, so-called “Spartans” – MPs who rejected a deal reached by Johnson’s predecessor Theresa May three times – and a caucus called the European Research Group.

While the Spartans and ERG have previously taken their lead from the DUP, reports suggest many now believe Johnson’s revised deal will be good for Northern Ireland.

Jeffery said a “significant chunk” of the hardliners are likely to back the prime minister.

“One reason is that there are substantive changes in his deal to what Theresa May proposed, which now give Northern Ireland the power to end the arrangement rather than the EU having a veto over that.”

A second focus of Johnson’s lobbying has been Conservative rebels he expelled from the party for voting against the government to try and block a “no-deal” Brexit.

Jeffery believes it likely that Johnson may welcome them back if they support him – although many will be wary of Baron’s comments that a “no-deal” scenario remains on the agenda.

“For some of them this is one way back into the Conservative Party fold after rebelling in the sense that he might say ‘If you vote for this, it is water under the bridge’.

“For a government that does not have a majority, getting some of these people back to take the whip would be a good idea.”

A further group that Johnson has likely targeted is the loose collection of Labour MPs in areas that voted to quit the EU in 2016, who fear that without a deal Labour will lose core voters.

Some evidence suggests otherwise: new research from the British Election Study shows that in areas which voted “leave” in 2016, people voting Labour are mainly “remain” supporters.

Labour waverers have been under intense pressure not to back Johnson by party leaders such as Shadow Chancellor John McDonnell, who says the deal will scrap worker rights in a “race to the bottom”.

Labour also remains torn over pressure for a second referendum that could in principle result in a vote to scrap Brexit altogether. Labour MPs Peter Kyle and Phil Wilson have tabled an amendment calling for a referendum, and say they have the backing of 90 MPs.

Nationalists in Scotland will be watching the “super Saturday” vote closely because they believe the different treatment agreed for Northern Ireland strengthens their case for a second referendum on independence, after they lost a 2014 vote by 45 percent to 55 percent.

Scots came out strongly against Brexit – 62 percent backed remain – and the country’s first minister, Nicola Sturgeon, has pledged to hold another independence vote.

Dr Nikos Skoutaris, associate professor in European Union law at the University of East Anglia, said: “This is not a good deal for Scotland, and gives Nicola Sturgeon a strong argument to say that the interests of Scotland have not been protected – making it another arrow they can use against the Conservatives.”

Scottish nationalists will likely be heartened by comments on Friday by foreign secretary Dominic Raab, who defended Johnson’s plan as a “cracking deal” for Northern Ireland.

Phinnemore said: “The Scots might be picking up on Raab’s statement by saying that if the deal for Northern Ireland giving it access to the EU market is fantastic, that implies it would be just as good for other parts of the UK.”