We play HQ Trivia every day at 3. Around 3:08, we Google in unison and say something along the lines of, “A giraffe only sleeps 30 minutes a day. Looks like we’re all out…” Then we talk about how HQ Trivia doesn’t have any advertising and speculate: What if it did?

Given the game’s popularity in the industry, we’re probably not the only ones. It seems like a goldmine for brands, the rare opportunity to reach people who they know are paying attention.

“Brands pay millions of dollars for Super Bowl ads because they know people are tuned in,” says Justin Mauldin, CEO of Salient PR and former marketing director at multiple mobile gaming companies. “Companies will pay tons of money just to run polls to figure out how many people saw their brand or understand their tagline. With HQ Trivia, it’s even more quantifiable because you know exactly how many people are playing. You could run advertising and research at the same time.”

Will HQ Trivia have traditional video ads? Probably not

With 10 seconds to answer a question, HQ Trivia moves so quickly, multitasking and second-screening are virtually impossible. When Scott Rogowsky (or Sarah Pribis, but mostly Scott) talks, you listen.

That level of engagement is more than an advertiser can hope for. On the surface, commercials between questions seems like low-hanging fruit. However, Mauldin points out that HQ Trivia’s format is too polished and streamlined for something with so much potential to feel disruptive.

“Ads in between questions will certainly generate impressions, but advertisers probably won’t see a lot of value,” agrees Daniele Bernardi, Head of Platform Solutions at Sailthru. “Those ads often force you to watch a video for 30 seconds or press a button that opens the App Store, which takes you out of the app you’re already in-and engaged with.”

More subtle (and likely) ways brands can get on board

HQ Trivia is funded by a venture capitalist and doesn’t have an advertising model at the moment. If that changes, native advertising seems like a much more feasible option. What are some other area in the game brands can sponsor?

The first two questions in any HQ Trivia game are typically layups. One recent example is, “Habitat for Humanity is a charity known for building what?” with luxury yachts, monster truck courses and houses as the options. “Habitat for Humanity” could easily be replaced with “Royal Caribbean,” for a price. With hundreds of thousands of people logged in, there’s no telling how much a brand would be willing to pay to sponsor a HQ Trivia question. 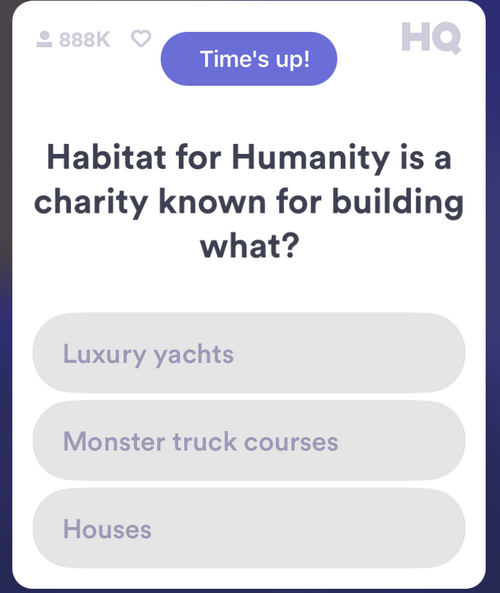 “One advantage of that is that HQ Trivia owns the relationship with the brand,” says Bernardi. “The brand doesn’t have to curate the question, but it can have some kind of resonance, like if Nissan sponsored a generic question about cars.”

It’s normal to see the number of players drop throughout the game. If people get eliminated, do they want to keep watching? But with a sponsored lighting round, they may, as they wait for their second chance, increasing engagement and time spent in-app.

“Samsung could sponsor 10 bonus questions around electronics or mobile phones with a prize of $25,000 or $50,000,” says Gorman. “Hershey could similarly sponsor a special Valentine’s Day round with a higher winning value on top of a successful promotion for all players who partake in that extra round.

Every once in a while, HQ Trivia has a special guest star, like Bert from Sesame Street or Olympic figure skater Kristi Yamaguchi. A brand mascot like Chester Cheetah could potentially serve as a co-host, too.

“Likewise, what if Hershey Kisses found a way to give HQ its first kiss on Valentine’s Day?” adds Gorman. “A brand’s out-of-the-box message, like a Hershey’s ‘kiss’ can be an integration point with a new media channel in order to maximize revenue through a number of first experiences that show organizers can be pitching to brands for authentic integration.”

If you get one question wrong in HQ Trivia, you’re out of the game. Exceptions are made for people who have extra lives, which are granted when you sign up a new player. If you complete an activity, you could earn an extra life, brought to you by Spotify.

Before the game starts, there’s a few minutes of welcome screen. Mauldin points out that “instead of shapes flying by, there could be a new flavor of Doritos.”

Though he’s known for his suits, Scott Rogowsky could wear an article of clothing from a sponsored brand. There could also be a subtle prop, like the American Idol judges’ omnipresent cups of Coca-Cola.

However, this one has a really fine line here. If the brand doesn’t fit in seamlessly, a product placement, in particular, could be a bit much. 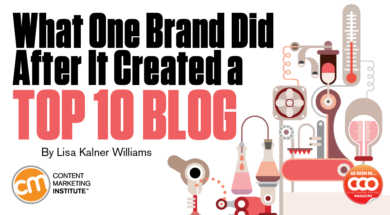 What One Brand Did After It Created a Top 10 Blog