Canada’s two main parties – Liberal and Conservative – have always defended the same sliver of monied interests and they always will. 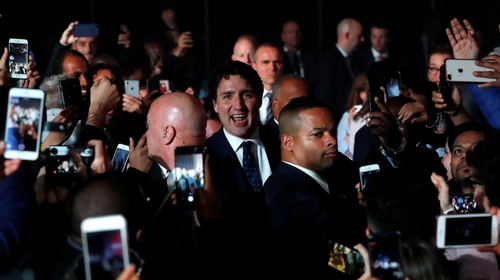 That pantomime was on routine display over the past several weeks, culminating in last night’s anticipated election of Justin Trudeau for a second, four-year term.

Their so-called “major policy differences” are a myth. On the two, defining issues of our time – income inequality and climate change – the differences between Liberals and Conservatives occur only at the rhetorical margins.

This is not a radical idea, although it will be dismissed as such. My goodness, it has even found a voice in some faint quarters of the mainstream media where one political columnist recently wrote, rather clumsily, that “there are real differences between the major parties. But these differences are not as stark as the parties would have you think”.

Still, as always, the corporate media have largely played along with the “choice” charade because that is their function – to pretend that choice exists when it fundamentally does not and never has. They are loath to acknowledge it. Instead, they cling to the notion that their job is to challenge the status quo, rather than be couriers for it. It is a comforting delusion.

Considered in this context, that Trudeau was able to keep his job as prime minister – leading a minority, not a majority government – will ultimately have a scant impact for the millions of “ordinary” Canadians who are $200 away from insolvency or who continue to live in persistent, precarious poverty.

Bereft of big, transformative ideas to alter radically the relationship between government and the vast majority of Canadians, federal politics in Canada has long been reduced to a parlour “game” where manufactured conflict and competing personalities – striving for that often elusive quality of “authenticity” – are packaged and sold.

Trudeau, like his father before him, is the Liberal Party. He embodies the party’s essentially vapid, unserious nature. The party stands for nothing, outside its perennial quest for power in order to safeguard the powerful. The SNC-Lavalin affair that saw Trudeau transform the government of Canada into, in effect, the subsidiary of an engineering company is blatant evidence of the Liberal Party’s overarching raison d’etre.

So, this time, Trudeau and his handlers had to hawk the caricature of a young, “progressive” politician with slightly different coloured wrapping paper since he no longer had a Borg-like prime minister to act as his foil.

Trudeau claimed, unconvincingly, that the election was not a referendum about him, but the welfare of Canada and Canadians. (I would like to think that, to my mind, Trudeau’s disqualifying history of donning blackface played some role in denying him another prized majority.) In any event, it was standard political gruel that translated into standard, political pledges.

Trudeau promised to tinker with the tax code and social welfare programmes to put more money in Canadians’ “pocketbooks”. Meanwhile, the fraction of the one percent of Canadians who control much of the country’s wealth – many of whom spirit their riches away in offshore, tax-free bank accounts – were reassured that a Liberal government would do nothing to change that happy equation.

What will Britain’s leadership change mean for Brexit?

Sadly, it worked – although Trudeau, the progressive caricature, proved somewhat less attractive to Canadians than in 2015 when the country was aching to rid itself of Stephen Harper.

Conservative leader, Andrew Scheer, built his campaign around the idea that he was the antithesis of Trudeau – a plain, uninspiring bureaucrat with monochromatic socks who would manage a complex country like a small business. Turns out, his sales pitch that Conservatives, unlike Trudeau, would let Canadians keep a little more of their money fell, like his persona, flat in too many seat-rich parts of the country. (Conservatives appear to have bested Liberals, however, in the popular vote.)

Arguably, the Conservative Party has not had an original idea since Confederation in 1867. It is a party devoid of purpose and direction that makes overt appeals to Canada’s far right, particularly on immigration and “free speech”, to try to cobble together a retrograde coalition as a route to the prime minister’s office.

Canada’s smaller parties, the nationalist Bloc Quebecois, the social-democrat NDP and the Greens, will hold, collectively, the balance of power in a minority Parliament.

If history is any guide, Trudeau’s new government will be short-lived. Liberals are congenitally averse to sharing the reigns with outsiders. As the “chosen ones” Liberals will not let parliamentary minions deny them what is rightly theirs – power.

That means, I suspect, the Liberals will either provoke the opposition into tabling a no-confidence motion or call a snap election when the time and mood fit and take their chances at securing a majority.

Then, Canadians will play their part in another made-for-TV pantomime.