At a press briefing in Beijing on Tuesday, a spokesman for the Hong Kong and Macao Affairs Office of the State Council, said the months-long “radical protests” have severely affected Hong Kong’s “prosperity and stability, pushing it into a dangerous abyss”. 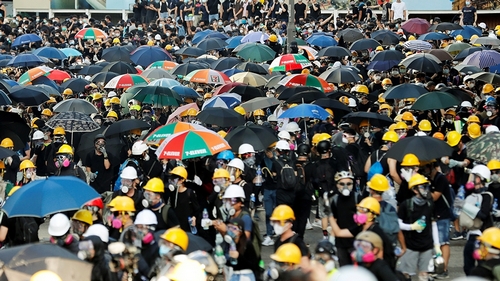 Protesters in Hong Kong must not “play with fire” and mistake China’s restraint for weakness, Beijing has warned, in its sharpest rebuke yet of the demonstrations in the semi-autonomous city.

Yang Guang said the Chinese government still “firmly supports” both the Hong Kong police force – who protesters have criticised for their heavy-handed response – and Carrie Lam, the city’s pro-Beijing leader who protesters want to resign.

“We would like to make it clear to the very small group of unscrupulous and violent criminals and the dirty forces behind them: Those who play with fire will perish by it,” he said.

“As for their punishment, it’s only a matter of time.”

Yang added: “Don’t ever misjudge the situation and mistake our restraint for weakness… Don’t ever underestimate the firm resolve and immense strength of the central government.”

Hong Kong has suffered weeks of sometimes-violent protests that began with opposition to a now-suspended extradition law, which would have allowed suspects to be tried in mainland courts.

The protests have since swelled into a broader backlash against the government of the Asian financial hub, fuelled by many residents’ fear of eroding freedoms under the increasingly tight control of the Communist Party. Demonstrators’ demands include an independent inquiry into alleged police brutality, the release of arrested protesters and the direct election of officials.

China’s People’s Liberation Army (PLA) in Hong Kong has remained in barracks since the protests started in April, leaving Hong Kong’s police force to deal with the enormous demonstrations, some of which drew millions.

During a “People’s Press Conference” on Tuesday, a protester using the pseudonym Jerry Chan indicated that demonstrators would not attempt to confront the military if it made an appearance.

“I believe the protesters and Hong Kong citizens will ‘be water’ and know what to do,” Chan said, referring to the protesters’ philosophy of taking a fluid approach to their demonstrations. “We will go home and sleep.”

Al Jazeera’s Andrew Thomas, reporting from Hong Kong, said Lam has characterised “online rumours of PLA involvement as an attempt at dividing people and shaking confidence in her government”.

However, while speaking to reporters on Monday, “She did not rule out ever requesting military help,” said Thomas.

Beijing’s warning on Tuesday came a day after a general strike paralysed the city followed by clashes at more than a dozen locations in the former British colony.

Police said 148 people were arrested during running battles with protesters on Monday.

Police stations were a particular target, with demonstrators hurling stones, eggs and bottles, and using giant improvised slingshots to catapult bricks over walls. An apartment complex that houses police officers and their families also came under attack.

The protests disrupted the train system during morning-peak hour and delayed scores of international flights, prompting a warning from Lam who said the city was nearing a “very dangerous situation”.

The unrest is the greatest political threat to Hong Kong’s government since the territory returned to Chinese rule in 1997, and one of the biggest popular challenges to Chinese President Xi Jinping since he came to power in 2012.

China so far has not visibly intervened in the situation, though it has published a series of strongly worded editorials in state media condemning “violent radicals” and “foreign forces” allegedly inflaming them.

During the briefing in Beijing, Yang called the PLA “a strong force that defends every inch of its sacred territory”, and said the central government would not allow any “turbulence” beyond the control of the Hong Kong government to threaten national unity or security.

“The PLA is a force of power but also a civilised power,” he said.

“As long as it has the strong support of the central government and the Chinese people, the Hong Kong government and police “are fully capable of punishing those criminal activities and restoring public order and stability”, he said.