Hong Kong police have fired tear gas in confrontations with black-clad activists in a popular tourist district, as the Chinese-controlled territory was again rocked by anti-government protests.

Officers with gas masks and shields on Saturday charged at hundreds of protesters who had surrounded a police station in the busy shopping district of Tsim Sha Tsui.

Masked demonstrators smashed the windows of cars in the police parking lot and daubed nearby walls with graffiti. One team of protesters created a large slingshot – held up by two members – to launch bricks at the building.

But standoffs continued into the evening with small groups of hardcore protesters trying to hold their ground behind makeshift shields.

Police said they used tear gas to disperse the crowd after protesters lit fires outside the Tsim Sha Tsui police station and “damaged multiple vehicles inside the station”.

Al Jazeera’s Andrew Thomas, reporting from Nathan Road at the protest site, said protesters were “very angry with the police”.

“There is no doubt the protesters’ tactics do involve, what they would say, low-level violence – not violence against people – only against property very closely associated with the police or the government,” he said.

Hong Kong has witnessed two months of huge rallies triggered by a proposed bill allowing people to be extradited to stand trial in mainland China. The protests have grown increasingly violent since June, with police accused of excessive force and failing to protect protesters from suspected gang attacks.

While the government led by Chief Executive Carrie Lam has since suspended the legislation, protesters have pressed on with five major demands – Lam’s resignation, an independent inquiry into police tactics, an amnesty for those arrested, a permanent withdrawal of the bill, and the right to elect their own leaders.

“On Monday, they’re calling for a general strike,” Thomas said, adding that protesters believed the only way they could achieve their aims was to “shut down the city by causing traffic jams, hence disabling traffic lights”.

“They say they’ve tried everything else and this is their only choice.”

Earlier in the day, tens of thousands of protesters marched through the crowded Mong Kok district, with many then dispersing to different parts of the Kowloon Peninsula, where they set up barriers across busy streets to block traffic. 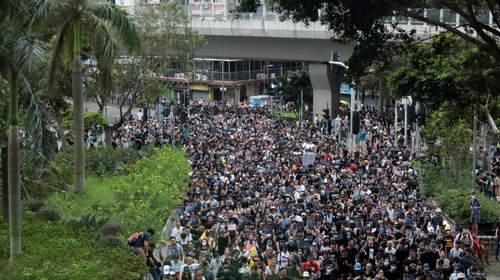 Many of the demonstrators wore yellow or white hard hats, and the crowds chanted “age of revolution!” and “Hong Kongers, add oil!” – a popular exhortation in Cantonese.

“The more the government suppresses us, the more we will come out until the government responds to our demands,” protester Ah Kit, 36, told AFP news agency.

Under Chinese rule, Hong Kong has been allowed to retain extensive freedoms, such as an independent judiciary, but many residents see the extradition bill as the latest step in a relentless march towards mainland control.

The protests against the bill have become the most serious political crisis in Hong Kong since it returned to China 22 years ago after being governed by Britain.

They also pose the greatest popular challenge to Chinese leader Xi Jinping since he took office in 2012 and come as Xi grapples with an escalating trade war with the United States and a slowing economy in a politically sensitive year.

On October 1, China will mark the 70th anniversary of the founding of the People’s Republic.

Authorities in Hong Kong and Beijing this week signalled a hardening stance, including with the arrests of dozens of protesters, and the Chinese military saying it was ready to quell the “intolerable” unrest if requested.

Thousands of pro-government supporters also held a rally in a separate park on Saturday, many waving Chinese flags and chanting slogans in support of the police – who have refuted allegations of using excessive force.

“We are the real Hong Kong people who are not the same as those black-shirted thugs. We don’t need a so-called ‘HK revolution’, we only need to do our best, which is enough,” he told the crowd. 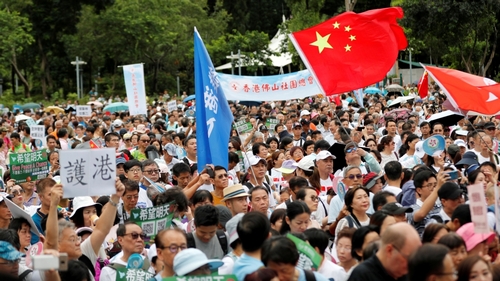 Sylvia Lam, 61, who described herself as a housewife, said she had turned up at the pro-police rally to oppose violence.

“I feel extremely uncomfortable when every time I watch TV, the scenes are so radical,” she said. “Young people should stop and think, don’t become someone’s political tools, be rational please.”

Beijing has increasingly pitched the anti-government protests as funded by the West.

Several children killed in attack on primary school in China