Hong Kong, China – Maricel* and six friends, Filipina migrants who work as domestic helpers in Hong Kong, recently went on a day tour, travelling by bus across the border to Shenzhen, a Chinese city in the province of Guangdong known for its lavish malls and burgeoning tech scene.

Women pack boxes to ship back to the Philippines in Central, Hong Kong’s business district and the site of several anti-government protests over the past four months Betsy Joles/Al Jazeera

They stocked up on snacks, took selfies on the bridge over Zhangjiajie Grand Canyon, and posed for a group photo with other bus passengers who were also domestic workers.

They were all enjoying a statuary Sunday off on the Double Ninth Festival long weekend.

When they re-entered Hong Kong, immigration officers informed them that the MTR, Hong Kong’s public rail system, had stopped operating for the evening.

Fraught relations between police and protesters had worsened the week before and some stations were closed intermittently while on other nights, services ended early.

Maricel and her friends made it to Kowloon, the northern part of Hong Kong, by bus after 11pm, when their mobile phones were back in range and they were finally able to explain their situation to their employers.

Her friends’ employers told them to stay safe and return home when they could.

But Maricel, 26, was almost three hours late for a curfew imposed by the family she worked for.

Her boss fired her on the spot by phone. She tried to get a taxi home but found none because the protests had disrupted traffic, so she stayed at a friend’s house overnight.

The next day, Marciel’s boss wouldn’t let her inside to take her belongings and said she would pack them herself and take them to the employment agency.

Maricel had worked for the Hong Kong couple since early 2018, cooking, cleaning and helping care for their 10-year-old daughter and pet poodle.

Dependent on an abusive system

They live in a precarious state – they are often overworked, underpaid and lack protective labour policies, said Eman Villanueva, a migrant worker from the Philippines and spokesperson for the Asian Migrants Coordinating Body.

Unlike expatriates from other foreign countries who are eligible to apply for residency after seven years, Southeast Asian migrant workers have no legal route to citizenship.

“Because of the existing government policies with regards to visas, we are all temporary migrants,” said Villanueva, who has worked in Hong Kong for 28 years.

Against the backdrop of the so-called pro-democracy protest movement that started in June in opposition a proposed Chinese extradition bill, some migrant workers feel even more vulnerable.

Earlier this month, tension soared as a teenage protester became the first victim of police gunfire during a rally.

A few days later, MTR suspended public rail services across the city; domestic workers depend on the service during their one day off.

As clashes between protesters and police escalate with the use of tear gas and water cannons, some migrant communities feel uncertain and fearful.

Language barriers are at play, with some domestic workers unable to locate accurate information about what exactly is happening, when and why.

Basilia Mendoza, a 38-year-old domestic helper from the Philippines, relies on Facebook and her relatives in Hong Kong for updates, but has found the social network to be an unreliable news source.

“I work here, of course I need to know what’s going on. But if I hear more stories or different stories, I don’t know which is right and which is wrong,” Mendoza said.

The Philippine and Indonesian governments have urged workers to stay away from protest actions.

“We always give advisories or reminders to our workers to avoid these areas, because it is only through this we can avoid the injuries,” said Antonio Villafuerte, assistant labor attache for the Philippines Overseas Labor Department. 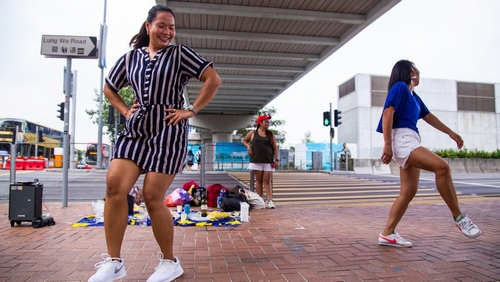 Domestic workers are the lowest paid group of labourers in Hong Kong, with a minimum monthly wage of HKD$4,630 ($590) and are required by law to live in their employers’ homes.

Even so, foreign workers contribute HKD$98.9 billion to Hong Kong’s economy, according to a report published in March.

Sring Atin, chairperson of the Indonesian Migrant Worker’s Union in Hong Kong, said domestic helpers’ rights, which are not always guaranteed in normal conditions, are being further violated as a result of the protests.

As of last year, there were around 166,000 Indonesian domestic helpers in Hong Kong, the second largest population after domestic workers from the Philippines.

Workers have complained to Atin that employers are demanding extra hours to accommodate their participation in protest activities – for example to take care of children while they rally, or to remain at home during rest days out of concern for the domestic helpers’ safety.

Cases of abuse of workers by employers have long been reported in Hong Kong, with ill treatment ranging from forcing them to work excessive hours to physical beatings and death threats.

Our message is we are in Hong Kong and we are part of society and there are valid issues affecting us, with or without the protests, that the government would have to address.

Since September, IMWU has been notified of five cases of abuse but the group has had to delay filing reports because police stations were either closed or overwhelmed by other requests.

“We don’t know how to make a complaint,” Atin said.

In addition to the daily challenges the protests have imposed upon some workers, experts and activists said there were broader ideological issues to consider.

Ka Mei Lau, organising secretary of the Hong Kong Federation of Asian Domestic Workers Unions, said migrant workers, like the protesters, have concerns about what autonomy means in practice regarding relationships with both employers and government.

They also feel they have a stake in Hong Kong’s status within the “one country, two systems” framework and the extent of the Chinese government’s control.

Two years ago, when reports were published about China’s desire to recruit Philippine women as maids and English teachers, migrant workers expressed fears over whether they would be protected in China without the support network of unions and community groups that exist in Hong Kong.

“They are not sure about that. They have doubts,” Lau said.

Our protest actions are not about extradition to China. They are about migrant rights.

Some migrant community leaders and critics of the pro-democracy movement have also voiced concerns that the protests ignore or overshadow the demands of workers, such as freedom of assembly, the right to a living wage and suitable living conditions.

Migrant worker community groups frequently organise their own rallies relating to these issues, and have a history of participating in social movements in Hong Kong; they supported striking dock workers in 2013 and the anti-WTO protests in 2005.

On a recent Friday, the Network of Indonesian Migrant Workers staged a rally outside the Indonesian Consulate demanding action from officials to publicly dismiss falsehoods, such as a story earlier in October claiming an Indonesian citizen was arrested in the protests.

The Indonesian Consulate later posted a statement on social media saying it had not received news of any Indonesian citizens or migrant workers detained for involvement in illegal assemblies.

Organisers complained that the consulate posted on Facebook in Bahasa, which they said was not enough to dispel rumours.

The rally was supposed to take place on an earlier weekend but organisers delayed the event because of citywide anti-government protests.

“Our protest actions are not about extradition to China. They are about migrant rights,” said IWMU’s Atin, emphasising the need to keep the two causes separate. 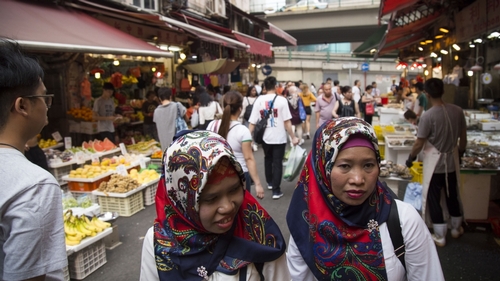 Women walk through a market off Bowrington Road, an area with several Indonesian-run businesses, blocks away from protest action Betsy Joles/Al Jazeera

Villanueva from the Asian Migrants Coordinating Body said domestic workers who had previously joined the pro-democracy movement have now opted out, fearing participation could cost them their jobs, or undermine their ability to organise their own events in the future.

“Even just throwing a cigarette butt can cost us our visa not being renewed,” said Villanueva, who lives with his wife, also a union member and migrant worker, and their Hong Kong-born two-year-old daughter. “The challenge for us is to how to actually get into the picture, without placing ourselves in a dangerous situation.”

After Maricel’s employer sacked her, she backtracked and said she could choose whether to stay and work or break the contract early. Maricel’s contract with the family comes to an end in February, and she worried that terminating it early might harm her chances of finding future employment.

“I chose to work,” Maricel later told Al Jazeera via WhatsApp. “It’s just I really need to work for my family.”

As punishment, she claimed her employer temporarily withheld her passport and refused her a rest day.

Despite incidents of exploitation, many still believe Hong Kong is a better and fairer place to work than other countries because of the city’s justice system, the network of unions and organisers, and a community of fellow domestic workers.

“We want to make sure that when we raise the issues, it is not in a tone that will appear that we are blaming the protesters, because that’s not our message,” explained Villanueva.

“Our message is we are in Hong Kong and we are part of society and there are valid issues affecting us, with or without the protests, that the government would have to address.”