Chinese censors ensure no news of the protests reaches the 1.4 billion people on the mainland Casey Quackenbush/Al Jazeera

Demonstrators used umbrellas to defend themselves from the police charge after a tense 20-minute standoff on the main street in Mongkok district. Police earlier used loudhailers demanding about 300, mostly young, masked protesters to disperse, then moved in when they ignored the order.

Crowds of protesters continued to face off with police as their month-old protest movement showed no signs of abating. Scuffles broke out between what appeared to be pro- and anti-government demonstrators.

Earlier in the day, tens of thousands of anti-government protesters rallied for another mass march, this time at a high-speed train terminal used for transit to mainland China in an effort to inform visitors of the intense resistance to a controversial extradition bill.

It was the first major protest since demonstrators ransacked Hong Kong’s Legislative Council last week. Crowds clad in black marched from Tsim Sha Tsui, a busy shopping district, to the Hong Kong West Kowloon Station, in the hope of engaging mainland tourists and spreading their message of peaceful resistance.

News of the mass rallies has been largely absent in mainland China’s state-controlled media.

“We want to reveal the real image of the protest,” said local politician Ventus Lau Wing-hong, who applied for a no-objection notice for the march from the police.

“We need to show peaceful, graceful demonstration to mainlanders.”

About 230,000 people attended the rally, organisers said, while police put the figure at 56,000. On Monday morning, officials said that there had been six arrests.

Hong Kong’s mostly peaceful protests have been held over the last month, drawing millions to the streets to demonstrate against a bill that would allow Hong Kong people to be extradited to mainland China for criminal prosecution.

But smaller protests have turned violent, escalating to unprecedented police brutality on June 12 and the storming and vandalising of the financial hub’s legislature offices last week.

The city’s embattled, Beijing-backed leader Carrie Lam has refused to fully withdraw the bill but has suspended it indefinitely. Demonstrators on Sunday said they wanted to win the support of Chinese visitors.

“Information is fraught on the mainland,” said Lau. 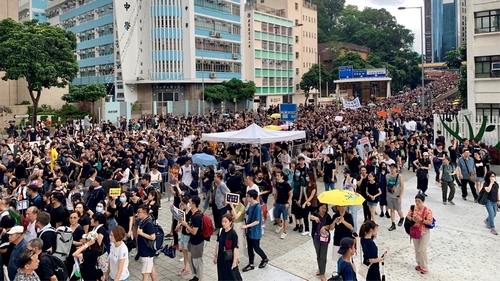 Since the protests kicked off, Chinese censors have worked to ensure no news of the Hong Kong demonstrations reaches the 1.4 billion people on the mainland where dissent is not tolerated.

News that does appear in state media blames the demonstrations on “foreign forces”.

As protesters flooded the highway and roads on Sunday leading to the rail station, participants waved British colonial flags, distributed leaflets, and used AirDrop to share electronic graphics with the public – hoping to spread understanding of the political crisis rocking the financial hub.

Much of their efforts were met with confused looks or dismissal.

“Most mainlanders do not know what we are fighting for, and this will be a very slow, educational process. It’s like running a marathon,” said Edward Chin, convener of the 2047 Hong Kong Monitor group.

“They’ve been blocked from information since the communists took over in 1949, so what can you expect? They don’t even know what happened 30 years ago with Tiananmen. So this is the beginning of some good engagement. I don’t know what the endgame will be.”

In anticipation of clashes between pro- and anti-Beijing protesters, which have occurred at demonstrations in recent weeks, 1,500 police officers were put on standby and the sale of high-speed rail tickets was halted around midday, the South China Morning Post reported.

The recent escalation has caused division in public opinion about the protests, but the main aims remain the same, including the retraction of the extradition bill, an independent investigation into the police’s use of rubber-coated bullets and tear gas on protesters, and for Lam to step down.

“We’ve been waiting for 20 more years for democracy. So as a middle-class man, I’m so angry and I’m so pleased that Hong Kongers finally voice out.”

Since Hong Kong was handed over to China by Britain 22 years ago, the semi-autonomous region has operated under a “one country, two systems” framework, which preserves its rule of law and civil liberties inherited from British rule but are unseen on the mainland.

Hong Kong’s significant autonomy was guaranteed under the handover deal until 2047.

In recent years, that system has come under threat by several overtures by Beijing, including the high-speed rail station, which is partly administered by Chinese law.

“If the legislation is passed then there’s no difference between Hong Kong and China,” said Xania, a 28-year-old participant who works at a bank in Hong Kong. “I think mainlanders will understand us. I don’t know if they will agree with us, but I want them to know this is the fact, this is the difference.”

Chin noted the stark differences between the mainland and the territory. “The core values of Hong Kong are different from China. This is beyond just the extradition amendment. This is fighting for the survival of Hong Kong.”

Police began the first wave of arrests since the storming of the legislative council building on July 1.

“No matter what we do, even if some people sacrifice themselves, the government still rejects the response to our demands,” said Lau.

“Most of our protesters, particularly the youngsters, don’t know what to do. That’s why we continue to find our way out, this protest is one way. Anything we can try, we need to try until the very last minute.”