Hong Kong’s embattled leader Carrie Lam said police exercised restraint in dealing with the latest wave of protests to rock the city. She condemned the “extremely violent” scenes at the legislature in an early morning press conference.

Hundreds of Hong Kong police fired tear gas and moved against protesters who smashed their way into the legislature and ransacked the building in unprecedented scenes.

Police restored control early Tuesday after clashes with protesters on the streets of Hong Kong at the end of a day of unrest.

Demonstrators in their hundreds overran in the Chinese territory’s legislature late on Monday, smashing walls, spray-painting graffiti, and taking over the chamber as the weeks-long crisis over a controversial extradition bill came to a head.

Police carrying riot shields, batons, and firing tear gas moved in shortly after midnight to clear surrounding streets. Plumes of smoke billowed across major thoroughfares and in between some of the world’s tallest skyscrapers.

The authorities earlier warned demonstrators to clear the building immediately, calling the occupation “illegal” and saying they would deploy “appropriate force” if the protesters remained inside.

The extraordinary scenes came on the anniversary of the semi-autonomous territory’s return from British control to mainland China 22 years ago.

Riot police apparently retreated as hundreds of demonstrators streamed into the building after a small group of mostly students wearing hard hats and masks used a metal trolley, poles and scaffolding to repeatedly charge at the compound’s reinforced glass doors, which finally gave way.

Once inside, protesters ripped portraits of officials from walls and spray painted slogans calling for the release of arrested demonstrators. An old colonial-era flag was draped over the speaker’s chair and a plaque showing a white flower, the symbol of Hong Kong, was blacked-out with spray paint.

The flag was later replaced by a black sign that read: “There is no way left. There’s no rioters, there’s only tyranny.”

Protesters fled the building by the time riot police reached the sprawling government complex after firing tear gas rounds and baton-charging demonstrators in the streets outside.

In the end, officers were able to walk into the ransacked main chamber without meeting any resistance.

Police estimated 190,000 people joined a peaceful march throughout the city on Monday, the third major one in as many weeks. Protest leaders told Al Jazeera about 550,000 people had taken part part in the annual July 1 march, dwarfing previous rallies. 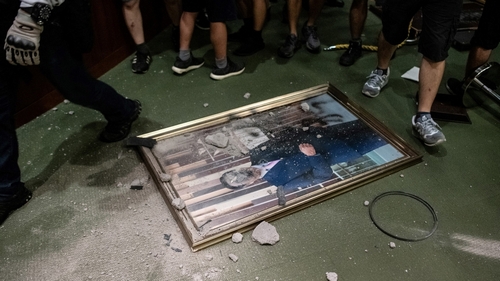 “They were extremely patient by allowing the kind of violence and riotous acts to play out to the fullest extent for all to see, but I think police will now have to exercise force to maintain law and order,” Leung told Al Jazeera. 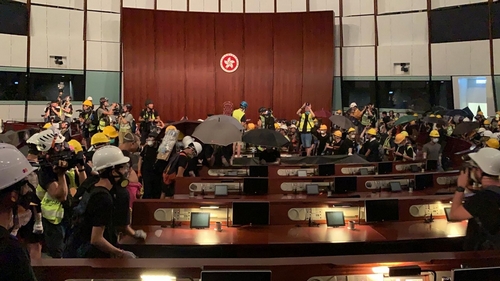 “If they keep on with the way they are doing it protesting, then the risk of the Chinese government taking much more drastic action gets that much closer,” he told Al Jazeera.

Al Jazeera’s Katrina Yu, reporting from Beijing, said Chinese authorities had so far been silent on Monday’s protests and state television channel CGTN was broadcasting footage of celebrations in Hong Kong to mark the July 1 anniversary, rather than scenes of the occupation.

In a rare report on the unrest, China’s Xinhua news agency said the Hong Kong government “strongly condemns and deeply regrets the extremely violent acts committed by some protesters”. 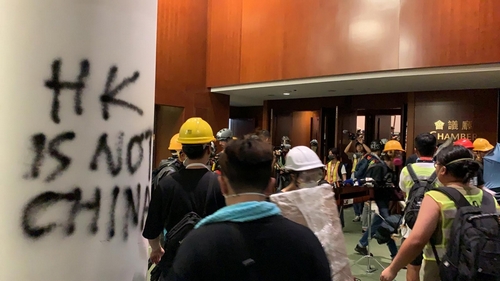 Chief Executive Lam suspended the controversial bill on June 18 after some of the largest and most violent demonstrations in the city in decades – with millions attending – but she stopped short of protesters’ demands to scrap it entirely.

The Beijing-backed leader is now clinging to her job as protesters call for her resignation at a time of unprecedented backlash against the government, which poses the greatest popular challenge to Chinese President Xi Jinping since he came to power in 2012.

Hong Kong returned to China in 1997 under a “one country, two systems” framework that allows the territory freedoms not enjoyed in mainland China, including freedom to protest and an independent judiciary.