China’s government and Chinese companies will cut business ties with US firms selling arms to Taiwan, the Chinese foreign ministry has said, in a move likely to worsen already poor ties with Washington. 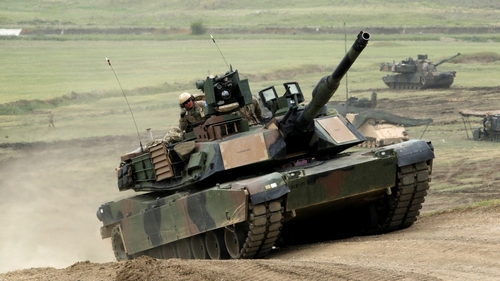 Sale of weapons for Taiwan, approved by the US include 108 Abrams tanks David Mdzinarishvili/Reuters

China claims self-ruled and democratic Taiwan as its own and has never renounced the use of force to bring it under Beijing’s control. China regularly calls Taiwan the most sensitive issue in its relations with the United States.

Last week, the Pentagon said the US State Department had approved the sale of the weapons requested by Taiwan, including 108 General Dynamics Corp M1A2T Abrams tanks and 250 Stinger missiles, which are manufactured by Raytheon.

China said on Friday it would sanction US companies selling weapons to Taiwan but did not elaborate.

The latest deal involves $2.2bn worth of tanks, missiles and related equipment for Taiwan.

“China’s government and Chinese companies will not cooperate or have commercial contacts with these US companies,” he told a daily news briefing on Monday, without giving details of the sanctions.

“I can’t reveal the details at the moment. But believe this: Chinese people always stress standing by their word.”

On Sunday, the ruling Communist Party’s official People’s Daily posted an article on its WeChat account identifying US companies that could be vulnerable to sanctions.

They included Honeywell International Inc, which makes the engines for the Abrams tanks, and private jets maker Gulfstream Aerospace, which is owned by General Dynamics. China is an important market for both Honeywell and Gulfstream.

Ties between China and the US are already strained over a trade war, which has seen them levy tariffs on each other’s imports.

This is not the first time China has said it would sanction US companies selling weapons to Taiwan.

China has announced such steps at least twice before – in 2010 and 2015 – but it is unclear if the sanctions were ever imposed.

US defence contractors have been barred from dealings with Beijing since China’s bloody crackdown on pro-democracy demonstrators in and around Tiananmen Square in 1989.

While its relations with Taiwan are technically unofficial, the US is required by law to assist Taiwan in its defence and is its main supplier of arms, though France has also previously sold warships and fighter jets to Taiwan.

China has been angered as well by the US allowing Taiwan President Tsai Ing-wen to visit last week, on her way to diplomatic allies in the Caribbean. She is due to transit the US again at the end of her trip next week.

‘Nothing to lose’: The Hong Kong protesters taking on China