China‘s President Xi Jinping opened celebrations on Tuesday to mark 70 years of Communist rule vowing that “no force” would be able to shake the country, as a massive parade of troops and military hardware showcased Chinese muscle in the face of an unprecedented challenge to its authority in Hong Kong.

“There is no force that can shake the foundation of this great nation,” Xi told invited delegates as he stood at the Tiananmen Square gate where Mao Zedong declared the People’s Republic of China in October 1949.

“No force will be able to stop the steady march forward of the Chinese people and Chinese nation.”

Authorities in Beijing have closed roads, banned the flying of kites, and even ordered pigeons to be caged amid tightened security for the invitation-only event to celebrate China’s journey from war-ravaged country  to the world’s second-largest economy.

After his speech, Xi, the country’s most powerful leader since Mao, reviewed the massed troops from the rear of an open-topped Red Flag or Hongqi limousine.

New weapons – including a hypersonic balistic nuclear missile capable of breaching anti-missile defences to reach the United States – were rolled out across the tarmac.

Behind the projection of strength at the tightly-choreographed event, Xi is facing a clutch of challenges that are testing his ability to maintain economic and political stability at home and abroad.

“The party hopes that this occasion will add to its legitimacy and rally support at a time of internal and external challenges,” Adam Ni, China researcher at Macquarie University in Sydney, told AFP.

But the major headache is Hong Kong, where pro-democracy protesters plan to grab the spotlight from Beijing on Tuesday with their own rally against what they see as the erosion of their special freedoms. 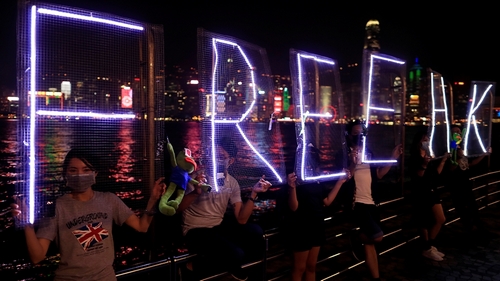 Anti-government protesters hold Pepe the Frog plush toys as they make a human chain in the harbour area in Hong Kong on the eve of Communist China’s 70th anniversary. Jorge Silva/Reuters

On Monday night they formed human chains using green frog soft toys which have come to symbolise the summer’s protests around Victoria Harbour.

The frog, named “Pepe” has become a widely popular protest meme in Hong Kong, appearing in endless posters and smartphone messaging stickers, even with the features of the territory’s leader Carrie Lam superimposed on its face.

“We use this frog in our communication, we sort of mock the government”, said Dorothy Chan, who took part in the protest.

Hong Kong has been embroiled for months in the worst unrest since it reverted to Chinese rule in 1997, with riot police and protesters engaged in running battles on the streets.

Authorities rejected a permit submitted by protesters for a planned march, but demonstrations were expected to go ahead regardless.

Police said on Monday they expected a “very serious violent attack” to mark the anniversary while the metro operator MTR closed some stations. Several large shopping malls announced they would close. Small scuffles were reported on Tuesday morning.

In an arrangement similar to that for the July 1 anniversary of the city’s handover from Britain to China – when protesters ransacked the legislature – guests attending Hong Kong’s traditional flag-raising ceremony were moved indoors.

Al Jazeera’s Scott Heidler said the authorities did not want the celebrations overshadowed, while protesters were eager to use the occasion to drive their message home.

“It’s a very, very important day generally for the People’s Republic of China but especially for Xi Jinping,” he said. “He has really pushed forward in his leadership this ‘one China’ policy and what we’ve seen here in Hong Kong with these protesters is going against that.

Hong Kong’s acting leader – Chief Secretary Matthew Cheung – said at the reception that the city had become “unrecognisable” because of the protests, which started in June.

Xi mentioned the ‘one country, two systems’ policy under which Hong Kong enjoys freedoms unseen on the mainland in his speech, stressing it was crucial for the “long-term prosperity and stability” of both Hong Kong and Macau, formerly a Portuguese colony.

Guy Saint-Jacques, Canada’s Ambassador to China between 2012 and 2016, told Al Jazeera that “unity” remained one of China’s paramount goals.

“The problem with Hong Kong is that China doesn’t know how to handle the protests,” Saint-Jacques said from Montreal. “They don’t have a habit of democracy and they don’t know how to it works. (And) they worry that the contestation in Hong Kong could spread to the mainland.” 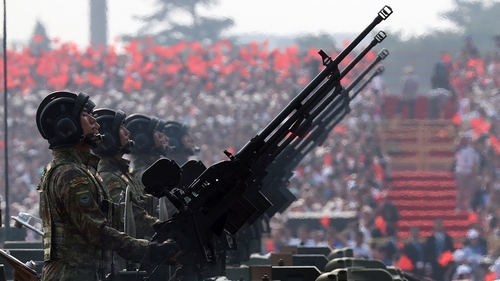 China is staging its biggest ever military parade to commemorate the 70th anniversary of the founding of the People’s Republic. Ng Han Guan/AP Photo

Embattled Hong Kong leader Carrie Lam left for Beijing on Monday to celebrate Communist China’s birthday on the mainland, where she joined Communist Party grandees and other guests watching an air display, 15,000 soldiers march across Tiananmen, and a showcase of the country’s newest weapons.

The Communist Party has repeatedly defied the odds to remain in power for seven decades.

Under Mao, tens of millions of people died during the disastrous Great Leap Forward, and the country was plunged into violent chaos during the decade-long Cultural Revolution.

After Mao died in 1976, the party launched the reform and opening-up policy under paramount leader Deng Xiaoping, starting decades of breakneck growth and development.

But the Communist Party of China (CCP) retained a stranglehold on power, sending troops to end the biggest challenge to its rule in 1989 when pro-democracy protesters occupied Tiananmen Square.

As expected, Xi referred in Tuesday’s address to his “Chinese dream”; the “rejuvenation” of a nation that is seeking what it sees as a return to former glory.

The Party wants to show on Tuesday “that under the leadership of the CCP, China is making strides towards becoming a rich and powerful country”, said Bonnie Glaser, senior adviser for Asia at the Center for Strategic and International Studies in Washington.

The Chinese leader has made clear that be believes only the Communist Party can make the country realise its dream – with him at the helm. 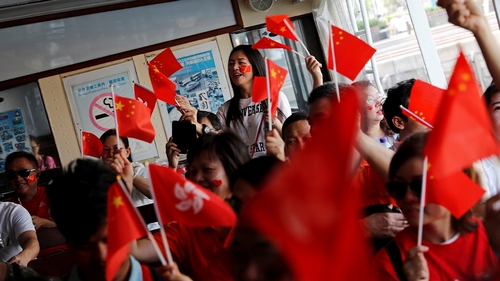 Pro-China supporters sing the Chinese national anthem on a ferry in Hong Kong. Three months of protests in the city have become an unprecedented challenge to the government in Beijing. Tyrone Siu/Reuters

The improbable new wine countries that climate change is creating