Hong Kong – As Hong Kong gears up for another weekend of mass demonstrations, all eyes are on the protesters’ next moves after an airport occupation last weekend turned ugly and drew the ire of mainland China. 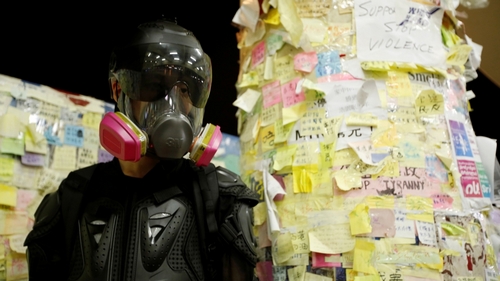 Four demonstrations unsanctioned by the police are slated for Saturday as the semi-autonomous territory is set to enter its 11th week of anti-government protests amid a political crisis that was sparked by a now-shelved bill to allow criminal suspects to be sent to mainland China for trial.

The protesters’ actions on Friday kicked off with calls for a mass cash withdrawal which turned out to be less disruptive than anticipated.

Andy Chan, the head of the now-banned pro-independence Hong Kong National Party, had called on protesters to withdraw money in order to disrupt the economy of the major international finance hub and gateway to China.

Photos on the messenger app Telegram showed protesters taking pictures of stacks of cash and ATM screens out of service. But the protest itself failed to trigger a run on the banks as hoped.

“This is the first time a political leader called for a bank run so that it could achieve some political goals,” said Heng Chen, an associate professor in economics at the University of Hong Kong’s business school.

Chen added, however, that a simple call “for a bank run is not enough to prompt people to queue outside the bank”.

The tactic marked a creative, non-violent effort to cause disruption. But protesters “have to be very careful”, said Sonny Lo, a political analyst.

“Because if they really anger or alienate more members of the public, then they follow in the footsteps of the Umbrella Movement in 2014,” he said, referring to another mass pro-democracy protest five years ago that paralysed the city for 79 days.

Protesters are still trying to recover from the apparent negative effect last weekend’s events had on public opinion after hundreds of flights were cancelled and two mainland Chinese men were beaten and tied up to trolleys during the occupation at the city’s international airport.

Since the escalation, China has moved thousands of paramilitary police to the border near the former British colony, disseminating images and videos of the troops doing anti-riot drills.

Beijing has also ramped up its rhetoric, saying protesters in Hong Kong showed signs of “terrorism”, while Liu Xiaoming, China’s ambassador to the United Kingdom, warned that the Chinese government had “enough solutions and enough power to swiftly quell unrest” should things became “uncontrollable”.

Despite the intensifying language, some protesters remain unperturbed.

“China knows if they send troops, they will corrupt the economy,” said a 29-year-old protester who asked to be identified as M, for security concerns.

“We don’t care. If they burn us, they burn with us,” he said, referring to a slogan regularly spray-painted around the city recently.

Another protester, identified as 24-year-old C, expressed concern but said he doubted China would move in troops.

“The thunder is loud, the raindrop is little,” he said, referring to a Chinese idiom. “All propaganda but no official action.”

For the time being, analysts see the likelihood of a military intervention as slim but not impossible. “Although a lot of Hong Kong people do not take the threat seriously,” said Lo, “as a veteran Hong Kong observer, I would take it seriously.”

Last weekend’s tumult has also brought Hong Kong’s political crisis to international attention, at a time of a bitter trade war between the United States and China, the world’s two largest economies.

US President Donald Trump said Beijing must deal with the protesters “humanely”, while also suggesting that if Chinese President Xi Jinping met the demonstrators, “there would be a happy and enlightened ending to the Hong Kong problem.”

Chen, the economics professor, said now that Hong Kong had captured global headlines, it was possible that the crisis would become a part of the agenda as China dealt with the trade war and “a hostile Western environment” which saw Beijing as “foe instead of friend”.

“In such an environment, the financial status of Hong Kong is more important to China than it was even a couple of years ago.”