China warned on Monday it will not sit back and watch Hong Kong’s protests develop into an “uncontrollable” situation as dozens of demonstrators occupying a university made a daring escape as police fired projectiles.

Many more anti-government protesters remained trapped inside the Hong Kong Polytechnic University, and two prominent figures were allowed by police onto the campus late on Monday to mediate – a sign there is a growing risk of bloodshed.

“The situation is getting more and more dangerous,” Jasper Tsang, a pro-Beijing politician who is the former head of Hong Kong’s Legislative Council, said after he arrived at the school.

Police fired tear gas and water cannon against protesters who tried to break through police cordons and reach the university to reinforce the demonstrators at the centre of a week-long standoff with security forces.

Black-clad protesters hurled petrol bombs as they tried to get to the school in the most intense violence in five months of anti-government demonstrations.

The South China Morning Post reported a large fire was burning inside the campus and loud explosions were heard late Monday.

Dozens of protesters escaped the besieged university by lowering themselves on a rope from a footbridge to a highway. Once on the road, they were seen being picked up by waiting motorcyclists and fleeing.

The violence drew a sharp rebuke from China’s ambassador to the United Kingdom, Liu Xiaoming.

“I think the Hong Kong government is trying very hard to put the situation under control,” Liu told a London press conference. “But if the situation becomes uncontrollable, the central government would certainly not sit on our hands and watch. We have enough resolution and power to end the unrest.”

The comments came after a brief and rare deployment of Chinese troops in Hong Kong over the weekend to clean up streets. The People’s Liberation Army has a barracks in an upper-class district of Hong Kong.

Asked about a possible intervention, the envoy said: “They are there to show Chinese sovereignty and they are there for defence purposes.”

Liu also warned against “external interference” in internal Chinese affairs, singling out the UK and the United States while accusing them of condoning violence by protesters.

Al Jazeera’s Rob McBride, reporting from outside the Hong Kong university, said there were a few thousand people who arrived and a battle between security forces and those trying to get into the school soon ensued.

“There has just been a fearsome clash between protesters who had gathered close to the university campus to try to support the besieged students. The ferocity of the water cannon and tear gas I think took many people by surprise,” said McBride.

“Most alarming deadly weapons were used at the Polytechnic University, which has become a weapon factory as well as a refuge for extremely violent rioters,” said Kwok Ka-Chuen, a police spokesman.

“The violence has reached a critical level. Rioters are intent on murdering our officers at all cost.”

Police have been attacked with bows and arrows, Molotov cocktails, and catapults firing bricks and other debris in recent days. 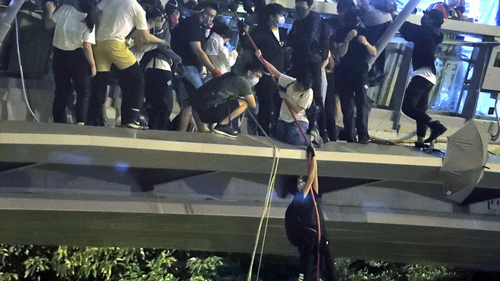 Lui accused demonstrators of trying to destabilise and paralyse Hong Kong to “seize power” in a push for independence.

“Hong Kong citizens live under black terror created by violent extremism with their life and property under severe threat,” he said.

Hong Kong’s economy has slumped into technical recession because of the months of protests, denting its international image as a place to do business, said Lui.

“The future of Hong Kong, if such a situation continues, would be unimaginably dreadful.”

Earlier in the day, hundreds of demonstrators made their way towards the university, attempting to break through the police cordons. Protesters blocked a major road not far from the campus to distract police and help those inside the campus escape.

“We have been trying to rescue them all day,” said a young man in a blue T-shirt, cap and spectacles, running down Nathan Road, the Kowloon district’s main commercial street. “They are trapped in there.”

The size of demonstrations has dwindled in recent weeks, but clashes between protesters and police have escalated sharply since early last week, when police shot a protester and a pro-Beijing man was set on fire.

On Monday night, protesters under cover of umbrellas huddled along the median strip in Nathan Road, filling bottles with petrol to make crude bombs, a weapon they have used increasingly.

Some residents were trapped at police cordons, and all the shops along a stretch of commercial strip that is usually one of Hong Kong’s busiest were shut.

Demonstrators are angry at what they see as Chinese meddling in Hong Kong’s promised freedoms when the then British colony returned to Chinese rule in 1997. They say they are responding to excessive use of force by police.

China says it is committed to the “one country, two systems” formula granting Hong Kong autonomy. The city’s police have denied accusations of brutality and said that they show restraint.

The European Union on Monday urged restraint from all sides in Hong Kong.

“It is crucial that all sides exercise restraint and engage constructively in de-escalation efforts,” the EU’s diplomatic chief Federica Mogherini said in a statement.

“Actions by the law enforcement authorities must remain strictly proportionate, while fundamental freedoms, including the right of peaceful assembly of Hong Kongers, must be upheld.”

Reporting from Tiananmen Square in 1989: ‘I saw a lot I will never forget’