China’s military has rotated a new batch of troops into Hong Kong describing the move as routine, state media said on Thursday, as protests against Beijing continue to rock the Asian financial hub. 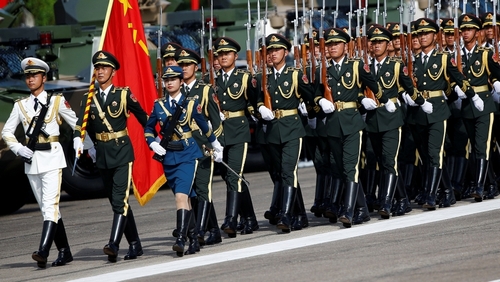 China had warned that Beijing would not ‘sit by and watch’ as the unrest in Hong Kong continues File: Damir Sagolj/Reuters

Chinese state media described the troop movement in the early hours as routine, while Asian and Western diplomats watching PLA movements in the former British colony had been expecting it.

Even if the rotation is described as routine, the timing is likely to hit nerves in the Special Administrative Region of Hong Kong, which returned to China in 1997.

In recent weeks, China has raised more alarms in Hong Kong after it was revealed that Chinese forces were massing across the border in Shenzhen.

China had also warned that Beijing would not “sit by and watch” as the unrest in the semi-autonomous Chinese city continues.

The Chinese statement last year said the number of soldiers and amount of equipment of the troops stationed in Hong Kong “was maintained with no change”.

That was not in Thursday’s announcement.

The military has completed a routine troop rotation in Hong Kong, with air, land and maritime forces having entered the territory, the report said.

Observers estimate the Hong Kong garrison numbers between 8,000 and 10,000 troops, split between bases in southern China and a network of former British army barracks in Hong Kong.

Hong Kong has been engulfed in angry and sometimes violent protests against the government for three months, sparked by a now-suspended extradition bill and concerns that Beijing was trying to bring the territory under greater mainland control.

The protests are the greatest political threat to Hong Kong’s government since the territory returned to Chinese rule in 1997, and one of the biggest popular challenges to Chinese leader Xi Jinping since he came to power in 2012.

China has denounced the protests and accused the United States and Britain of interfering in its affairs in Hong Kong. It has sent clear warnings that forceful intervention was possible.

On Tuesday, Beijing again warned against foreign governments interfering in the Hong Kong protests after the G7 summit of leaders of seven industrialised nations called for violence to be avoided.

How to Use Adobe Dimension for Packaging Design

Hong Kong leader Carrie Lam has also not ruled out the possibility her administration could invoke emergency powers to quell the protests.

She said in a news briefing on Tuesday that violence was becoming more serious, but was confident the government could handle the crisis itself.

On Saturday, another mass protest is being organised by the Civil Human Rights Front, the same group that led the march, which attracted up to two million people.

The protest would mark five years since Beijing ruled out universal suffrage for Hong Kong.

All the latest updates