Hong Kong leader Carrie Lam has said her administration’s bill to allow people to be sent to the Chinese mainland for trial was “dead” following a series of mass protests, but she stopped short of completely withdrawing the so-called extradition bill as demonstrators have demanded.

“There are still lingering doubts about the government’s sincerity or worries (about) whether the government will restart the process with the legislative council,” she told journalists on Tuesday, referring to Hong Kong’s parliament.

“So I reiterate here, there is no such plan. The bill is dead.”

Beijing-backed Lam admitted that the government’s work on the issue had been a “total failure”.

The bill, which would have allowed people in Hong Kong to be extradited to China for trial, has sparked huge and at times violent street protests and plunged the former British colony into its biggest political crisis in decades.

The protesters appeared unimpressed with Lam’s latest attempt to reduce the political temperature in the semi-autonomous territory.

Local activist Ventus Lau Wing-Hong said he could see no reason for the demonstrations to stop.

Lau was disqualified from running in elections last year after showing support for Hong Kong’s independence on Facebook.

“The response just shows that she is still very stubborn,” Lau said. “To avoid using the word ‘withdraw’ shows that she still wants to play the word game instead of directly answering yes to our demand. I can’t see any reasons why people will stop their protests.” 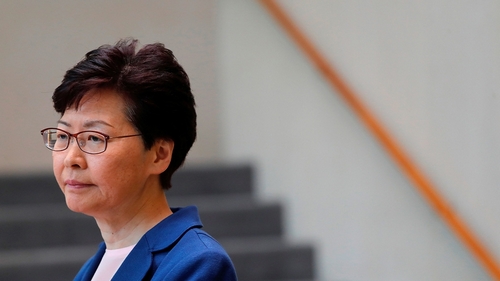 Joshua Wong, who led the Umbrella Protests that brought the city to a standstill in 2014, dismissed Lam’s comments on the bill’s status as a “ridiculous lie”, noting that unless the bill was withdrawn it would remain in the government’s legislative programme until July next year.

Over the past few weeks, opposition to the bill has brought millions of people onto the streets in largely peaceful protests marred by sporadic outbreaks of violence and police use of tear-gas, rubber bullets and pepper spray.

Scores have been arrested and protesters have demanded an independent investigation into police tactics.

Lam promised on Tuesday that allegations of brutality would be investigated, but not by an independent body.

“Carrie Lam has demonstrated a more modest and more humble attitude as she intends to win over the less committed and the ‘middle-of-the-roaders,” Joseph Cheng, a professor at City University of Hong Kong told Al Jazeera.

“But I do believe the vast majority of Hong Kong people now want better guarantees that the government is going to be accountable to them, will stand up for their interests and avoid and prevent too much interference from Beijing. This is a tall order but she has to restore that confidence in her government.”

Lam first said she would suspend the bill in mid-June after confrontations on the streets between police and protesters, but the move failed to mollify critics who took to the streets the very next day calling for her resignation.

On July 1, which marks the day when Hong Kong reverted to Chinese rule in 1997, a group of protesters forced their way into the legislative council, ransacking the building and covering the walls with graffiti.

Al Jazeera’s Rob McBride said for many of those at the demonstrations, opposition to the extradition bill had been a catalyst to air long-held frustrations on the governance of the territory.

Hong Kong is ruled under a “one country, two systems” formula that is supposed to ensure an independent judiciary, as well as civil rights and freedoms for its people.

“The genie is out of the bottle,” McBride said from Hong Kong. “People aren’t just talking about the extradition bill. They are talking about Hong Kong’s wider relationship with China; the old subject of universal suffrage; why can’t we vote for a government of our choice and a leader of our choice; why the leader is effectively chosen by Beijing.”

Demonstrators are now focusing their attention on mainland visitors to the territory, marching on Sunday to a high-speed railway station, which is the entry and exit point to Hong Kong for many mainland Chinese.

With additional reporting by Casey Quackenbush in Hong Kong

Duterte finds a friend in China but critics cry treason

HK chief to focus on housing, livelihoods to woo protesters