Hong Kong, China – About 100 people remain holed up on the campus of Hong Kong Polytechnic University after a multi-day confrontation between police using tear gas, water cannon and rubber bullets, and protesters armed with improvised weapons.

Police are calling on the remaining demonstrators to drop their weapons and surrender, and have arrested those who have tried to escape.

Confrontationson the university’s grounds over the past few days continued into Tuesday morning, with police tightening their hold on the university and its surrounding areas, and protesters outside the campus attempting to break police lines and enter the university – another marked escalation in the city’s ongoing protest movement.

Hundreds of other protesters were evacuated from the university last night, while a small group were on watch at the university’s entrance early on Tuesday morning.

Speaking at her regular press conference on Tuesday, Hong Kong Chief Executive Carrie Lam said she was “extremely worried’ about the situation and that she had told police she wanted the situation resolved peacefully in a “humane manner.”

She added that about 600 people had left the university (200 of them under the age of 18) overnight and that about 100 people were still there.

Her comments came as Chinawarned Hong Kong’s courts, which on Monday ruled a ban on face masks illegal, had no power to rule on such constitutional matters. 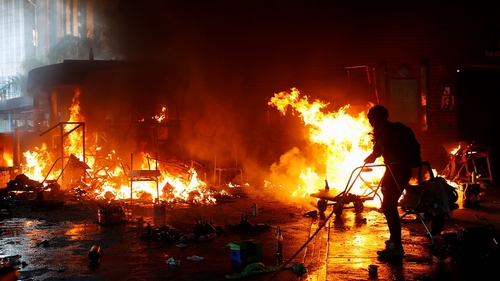 Chaos erupted around PolyU and surrounding areas on Monday night as protesters and their supporters clashed with police.  Thomas Peter/Reuters

Protests erupted elsewhere across the city into the early hours as protesters took to the streets, voicing their anger at the police presence at PolyU, and setting up roadblocks made from bricks and bamboo poles with a rallying cry of “save the students.”

The situation began to escalate before dawn on Monday when police entered the Hung Hom campus threatening to use force if demonstrators did not leave the university’s grounds, which they had been occupying since Thursday.

The advance fuelled concerns among some in Hong Kong of an even more forceful crackdown.

Bystanders gathered at police cordons set up in the area surrounding the university, calling on police to exercise restraint.

At one blockage on Hong Chong Road, running parallel to the Cross-Harbour tunnel, a PolyU grad who wanted only to be known as Jack read aloud to police from his phone a Facebook post he had written about the need to de-escalate.

“Both parties should calm down, I think,” the 35-year-old said, speaking to Al Jazeera later and urging police to be measured in their response to students still inside. “A lot of peaceful protesters like us, we are trying to stop the violence.”

Whether police would enter the university by force was the question on many people’s minds after they called on those inside the university to leave or risk “taking part in a riot.” Riot police gathered at exit points around the campus and later arrested numerous people in the area. 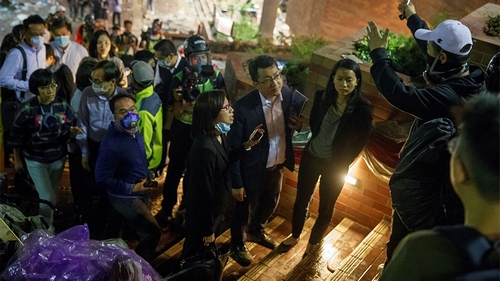 Teachers and families went into PolyU to try and negotiate with protesters about the surrender of younger students. Thomas Peter/Reuters

Chris, an 18-year-old PolyU student who sat on the roof of the university’s entrance late on Sunday said anxiety was high among front-line protesters because of the fear that things could get more dangerous.

“The weapons they use put a lot of pressure on us,” he said. “People feel angry, really extremely angry.”

Other students who were inside the university before police entered Monday talked about having no alternative to staying because the police had blocked the exits.

In a video Jin Guang-Teng, the president of PolyU, urged protesters to leave the campus, saying he would personally accompany students to police stations so that their cases would be processed fairly.

Politicians and educators tried to reach agreements with police to get protesters off the campus safely into the early morning on Tuesday.

PolyU, next to the Cross-Harbour Tunnel that links Kowloon with Hong Kong Island, is one of the few universities that remain a site of protest in Hong Kong.

The Chinese University of Hong Kong saw some of the most intense clashes between police and protesters early last week. Both sites were used to block traffic on major thoroughfares as part of an attempt to mobilise a general strike and bring the city to a standstill.

Professor Wai Fong Ting, a former professor of social work at PolyU who spent the past few days on the premises said she had been supporting those who remained on campus because she believes providing guidance to the young people participating – many of them her former students – is the right thing to do.

Among the concerns she’s heard from students who come to seek her help on campus were fears about the encroachment of Chinese power, particularly surveillance.

One 13-year-old protester who she drove home from the demonstrations at the university on Saturday first asked if he could check if she had a camera in her car.

Fears about Beijing’s influence and how much power it will wield over Hong Kong have taken centre stage in the protest movement that started in June in response to a proposed extradition bill to China.

Protesters now want assurances on Hong Kong’s autonomy and are calling for amnesty for those arrested in the disturbances, an inquiry into alleged police brutality, a retraction from referring to protesters as rioters, and the right to elect their own legislature and leader.