Authorities on Friday ordered the evacuation of the towns of Tajuya, Tacande de Abajo and the part of Tacande de Arriba that had not already been vacated.

Residents there were initially told to stay indoors to avoid being affected by any ash and lava fragments, but Canary Islands emergency services decided to U-turn on the decision once it became clear the situation had not stabilised.

Three more towns have been evacuated and firefighters forced to retreat amid ongoing volcanic explosions on the Spanish island of La Palma.

The return of volcanic activity also caused airlines to cancel flights due to a “large” cloud of gas and ash, thought to be the biggest since the volcano erupted on Sunday. 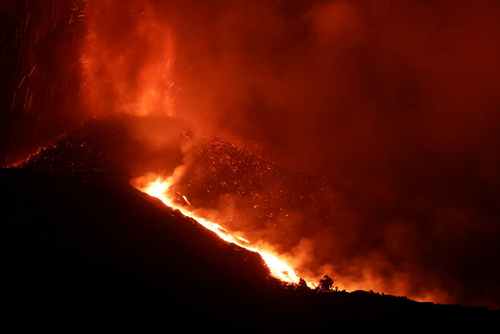 Firefighters had to withdrew from the town of Todoque owing to a “high presence of ash”, the local fire service said on Twitter.

Crews were reportedly in the middle of a clean-up operation in the town on Friday afternoon when a new vent opened up in the flank of the volcano. Videos shared on social media showed a massive shockwave emanating from the eruption site.

“The volcano is in a newly explosive phase… firefighters will not operate anymore today,” said the Tenerife fire service, which has been deployed to help on La Palma.

Since erupting on Sunday, the Cumbre Vieja volcano has spewed out thousands of tons of lava and destroyed nearly 400 buildings, including many homes, on the western side of the island of 85,000 people.

Almost 7,000 people have had to flee their properties amid loud explosions, a large cloud of ash and a cracked fissure that has let out additional lava.

The ash cloud, which the Canaries volcanology institute said had extended to around two-and-a-half miles in the sky on Friday, forced regional airline Binter to cancel flights into and out of the island.

While the airline could not say when it would resume operations, airspace above the island remains open apart from two small areas near the eruption site.

Spanish prime minister Pedro Sanchez said he and ministers plan to declare La Palma a “catastrophic zone” and provide aid to those affected.

No serious injuries or fatalities have yet been reported, which some say is due to the speed of the evacuations.

However, around 15 per cent of the island’s economically crucial banana crop could be at risk – jeopardising thousands of jobs, according to Reuters.

Scientists say the lava flows on La Palma could last for weeks or even months. The last eruption on the island, in 1971, went on for just over three weeks.

Meanwhile, the last eruption on all of the Canary Islands occurred underwater off the coast of El Hierro island in 2011 – it lasted five months.