The BBC described Tonight With Vladimir Putin, which has yet to air, as a “television first” with new technology enabling a “3D digital cartoon of Putin to walk around and sit behind the desk, interviewing real human guests in front of a studio audience, all in real time.” 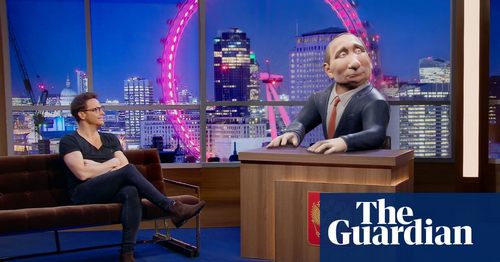 In response, RT – described this month by the British foreign secretary, Jeremy Hunt, as a “weapon of disinformation” – published an article describing the show’s concept as a “regurgitated dystopian nightmare copied from the popular Channel 4/Netflix series Black Mirror but bastardised almost beyond recognition”.

It said: “Surprisingly, many people were able to overcome bouts of nausea and cringe-induced spasms long enough to air their disgust at what their compulsory licence fee is funding these days.”

It went on to criticise the rest of the BBC’s comedy output and suggested the hit TV show Mrs Brown’s Boys counted as a “potential crime against humanity”.

Along with Campbell, guests on the Putin show include the TV presenters Joe Swash and June Sarpong. The latter plays “a game of Diversity Challenge” with the animation of the Russian president.

In one episode the animated Putin tries to discuss feminism with Deborah Frances-White, the host of the Guilty Feminist podcast. “It’s fair to say his grasp of the concept remains patchy,” the show notes state.

The Putin character is written and performed by the comedian Natt Tapley, who has previously worked on Have I Got News for You.

A preview clip featuring an accented Putin walking around outside Buckingham Palace gives a flavour of what audiences can expect.

“When I was young KGB office in late 1980s I was the only person who knew the forbidden delights of the west: blue jeans, rock’n’roll, and Terry Wogan,” says the Putin character. “I have won many great victories but none of them made me truly happy. Because until now the greatest victory eluded me: That of number one chatshow in the UK. So watch out Graham Norton, I’m coming for you!”

The BBC has yet to confirm when it will broadcast the show.