“Greece recognises China not only as a great power but also as a country that has won for itself, not without difficulty, a leading geostrategic economic and political role,” Prime Minister Kyriakos Mitsotakis told Xi. 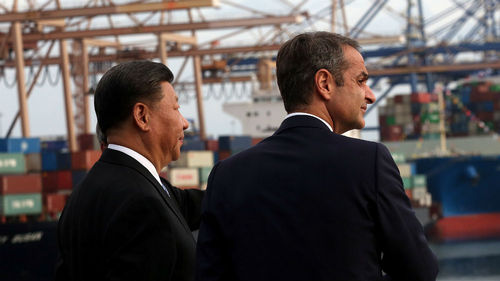 Athens, Greece – Greek leaders on Monday hailed Chinese President Xi Jinping’s first official visit to Greece as a “new era” in what is an already close trade and investment relationship being closely watched by the United States and the European Union.

Greece is eager to play a greater role in China’s overseas development. During the visit, the two countries’ delegations signed 16 memorandums of cooperation, the most important of which outline new Chinese energy investments in Greece.

One establishes an Athens branch of the Industrial and Commerical Bank of China to finance renewable energy projects. Another facilitates a 50-megawatt solar power station on the island of Crete being built with technical expertise from the China Energy Engineering Group.

In an editorial published before his arrival, Xi laid out his vision for increased cooperation “in all areas”.

“China and Greece must together promote the building of a new type of international relationship based on respect, justice and mutually beneficial cooperation,” he wrote.

The ‘head of the dragon’

Greece-China relations took off this year when the four-month-old conservative New Democracy government approved 611.8 million euros ($67m) in Chinese investments that had been frozen for 18 months under the left-wing Syriza government.

Over the coming five years, the investments, referred to as the “master plan”, will bring to almost $3bn the amount the state-owned China Ocean Shipping Company (COSCO) will have spent on the port of Piraeus, China’s signature investment in Greece, and one which Xi refers to as “the head of the dragon”.

COSCO has been developing Piraeus as an entry and transhipment point for Chinese-manufactured goods for a decade. Its strategic advantage to container shipping over the ports of northern Europe is that it saves a week’s sailing and almost $2m per trip. That makes it a crucial link in China’s Belt and Road initiative – a series of hundreds of infrastructure projects aiming to lower the cost of Chinese exports to Europe and Africa.

Thanks to COSCO’s investments, container throughput at Piraeus rose from 685,000 in 2010 to five million containers last year. Piraeus will this year become the Mediterranean’s biggest container port, and by some estimates handles 10 percent of Chinese commodities exported to Europe; but that no longer seems enough.

“We intend to make Piraeus the biggest port in Europe, and the master plan ensures that we will succeed,” said Xu. “We want to make Piraeus a global trans-shipment centre on the Singapore model.”

This openly pits Piraeus against the likes of Hamburg and Rotterdam, and would likely cost billions in additional rail and port infrastructure.

“In the coming months, we expect container throughput to pass the 15 million a year milestone. It is not for Port of Rotterdam to determine whether other ports can copy this achievement, nor how they envisage to surpass this,” he said.

In maritime trade, Greece and China seem to have a natural area of cooperation.

“We are a nation of seafarers,” Mitsotakis said at the China International Import Expo in Shanghai on November 5. “Greeks control 25 percent of the world’s oceangoing merchant fleet. The synergies with China, the world’s biggest export economy, are obvious.”

By investing in Piraeus, China is helping to realise a decades-long dream of Greek shipowners to create a cluster of shipping services such as ship management, ship repair, finance and insurance.

“Mitsotakis is highlighting … how open Greece is for business, how much it has diversified, opened its sectors, laying out the red carpet, and in doing this he is sending a message to others,” says Jens Bastian, an independent economist and China expert.

“If the Chinese are doing this, then the Americans can also do it, the French, the Germans, the Swiss, the Italians can do it. He means to address other constituencies in other countries.”

But some analysts warn that, for all its warmth, the Greece-China relationship is also highly asymmetrical.

“On the basis of calculations we’ve made … I think the Greek side may not be gaining more than one percent of the overall benefits to be drawn from Piraeus,” says Plamen Tonchev, who heads the China Unit at the Institute for International and Economic Relations in Athens.

“Think of the worth of the content of each container. We may be talking about 30-40bn euros’ $33bn-$44bn worth of all these commodities entering Europe every year. Compare the overall worth of all those commodities with what is going into Greek state coffers and you’ll see that there’s a huge gap between those two figures.”

COSCO has raised Piraeus’ turnover by a third and its profitability fourfold. Last year it paid $11m in dividends, of which 24 percent went to the state.

Although it approved COSCO’s buyout of the Piraeus Port Authority (PPA) in 2016, the European Commission has also expressed its reservations about Chinese influence in Greece.

This influence was most clearly suggested under the Syriza government, which came to power in 2015 to end austerity policies the Eurozone had been imposing on Greece since 2010.

Syriza tried and failed to fund the government through large-scale lending from Russia and China, hoping this would counterbalance the leverage held by the Eurozone, which owns about two-thirds of Greek debt.

Perhaps as part of this effort, Syriza appeared to volunteer a political alignment with China. In June 2016, shortly after the PPA sale, Greece blocked a joint EU statement calling on China to respect the International Law of the Sea. China had just lost an arbitration brought by the Philippines to the International Court of Justice at The Hague over fishing rights in the Spratly Islands – a disputed territory between the two.

Croatia and Slovenia also opposed the statement, but it was the objection of Greece, a more senior EU member and traditional defender of the Law of the Sea, that raised eyebrows.

Responding to questions of political influence, then-Foreign Minister Nikos Kotzias lashed out at other EU member states with larger Chinese investments: “For them, it’s business as usual, but if we sell something it affects our political stance. This is hypocrisy and doublespeak and I have told them so.”

A year later, Greece again raised hackles at the UN Human Rights Council in Geneva, when it blocked an EU statement calling on China to respect freedom of speech. It was the first time the EU failed to make its unanimous annual statement.

Kotzias’ position here was even more startling: “I respect that the Chinese have a different opinion on human rights … Are human rights as the West perceives them generally applicable? Or do some people have a different understanding? One has to respect that. We believe that they are generally applicable. But not everyone believes what we believe.”

Greece has consistently called upon others, especially neighbouring Turkey, to respect international maritime law and human rights. Its modification of both standards within a year was unprecedented.

New Democracy has done the opposite to Syriza: It has released COSCO funds to complete most of its investments but reaffirmed Greece’s Western orientation.

Still, the US is wary. During a visit to Athens last month, US Secretary of State Mike Pompeo warned the Greeks against China. Sometimes, he said, “a country shows up with a facially commercial product, but it turns out that that product is being offered for political interest.”

He especially warned Greece against buying 5G telecommunications technology from China. “You’re showing up to provide maybe a telecommunications network because you want your communist party to be able to steal all the information that going to move across that network,” Pompeo said.

Mitsotakis is treading a fine line between old and new allies, as he strives to maintain stability and deliver on his promise of growth and jobs. During his visit to Shanghai last month, the government said it was in talks with Chinese telecommunications giant ZTE to build a factory in Greece to manufacture telecoms equipment.

But Tonchev believes Greece’s political flirtation with China is over. “Greece needs the US and EU,” he says. “There’s a lot of tension in the eastern Mediterranean. There’s an unpredictable Turkey next door. And China doesn’t have a role to play in this geopolitical equation.”

China is, however, unquestionably going to great lengths to buy a long-term position in Greece. And the fact that this investment began during a decade when Greece’s economy shrank by a quarter due to austerity, makes the bond all the stronger.

“Your company and China as a whole believed and invested in my country when many felt that investment prospects in Greece were nonexistent,” Mitsotakis told Xu in Shanghai.

He appeared to complete the sentence a week later, as he told Xi in Athens: “Now that our country is developing again, it is regaining a leading role, a leading position, not only in our broader neighbourhood but also in Europe as a whole. We are not merely partners. We are broadening our common goals.”

Chelsea owner Roman Abramovich is without a UK visa