Relations soured last month after a visit by a Russian MP to Georgia’s parliament set off angry protests. Russia responded with a ban on direct flights and MPs said they would discuss fresh bans on popular imports of wine and water.

Russia has denounced an expletive-laden attack on Vladimir Putin by a Georgian television host, as Russian MPs threaten to further cut trade amid a deepening diplomatic crisis between the neighbouring countries.

Speaking in Russian on Georgia’s Rustavi 2 TV station on Sunday, the host, Giorgi Gabunia, called Putin a “filthy invader” and insulted the Russian president’s mother using coarse language, before adding “Oh, your mother’s dead … Let her burn in hell with you and your father.” 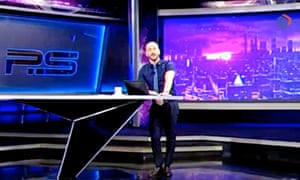 Gabunia also called Russian people “slaves” and told them to get out of Georgia, which is a popular holiday destination even after the short war fought by the two countries in 2008.

The remarks prompted complaints on Monday from the Kremlin and the Russian foreign ministry, which portrayed Gabunia as a radical and said the Georgian government had not done enough to control anti-Russian sentiment.

“We believe they are totally unacceptable and deserve condemnation,” said the Kremlin press spokesman, Dmitry Peskov, when asked about the remarks. They were the “consequences of the reluctance or unpreparedness of the authorities to keep extremists at bay right from the beginning”.

“The current outrageous incident is a clear example of where rabid anti-Russian sentiment leads,” the foreign ministry said in a statement.

The Georgian president, Salome Zurabishvili, also urged restraint, condemning “hate speech” in a Facebook post. She had earlier angered the Kremlin by calling Russia “our enemy and occupier”, following protests over the Russian MP Sergei Gavrilov’s visit to the Georgian parliament.

Rustavi 2 temporarily suspended broadcasts on Sunday evening after protesters picketed its headquarters. It issued an apology on Monday morning.

Russian MPs said on Monday they were considering further economic sanctions on Georgia. The head of the ruling United Russia faction said parliamentary leaders would discuss a ban on imports of Georgian wine and bottled water, as well as direct money transfers. Several parliamentary factions voiced support for the initiative, although any final decisions on trade policy will probably come from the Kremlin.

A Russian ban on direct flights to Georgia, in response to the recent protests, came into effect on Monday. It struck a heavy blow against Russian airlines and Georgia’s tourism industry, as well as hundreds of thousands of Russian tourists. Protests against Russian support for several breakaway regions have been going on in the capital, Tbilisi, for several weeks.

‘Not a statesman’: Matteo Salvini – the Zelig of Italian politics

Macron tells Putin truce in Syria’s Idlib must be respected