Giuseppe Conte, a technocrat whose appointment was key to the brokering of a coalition between the League and the populist Five Star Movement (M5S), said he would speak to parliament after Matteo Salvini, the deputy prime minister and leader of the League, refused to bow to pressure from M5S to give a detailed response to the claims. 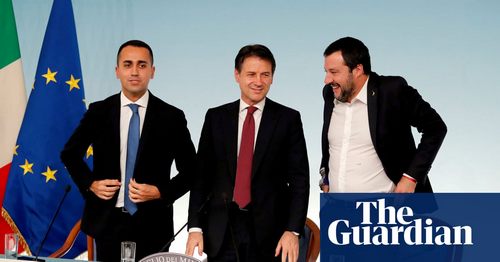 Italy’s prime minister will address the country’s senate on Wednesday to discuss allegations that the far-right League party sought money from Russia.

Salvini said he would be willing to discuss the issue during the regular question time session. But early on Wednesday morning, it was unclear if Salvini would even be present, with reports suggesting he would not appear and his spokesperson unable to confirm either way.

He has repeatedly denied his party has taken money from Russia, following reports earlier this month that one of his aides had allegedly endeavoured to strike an oil deal in a Moscow hotel that would have diverted Russian funds to the League to bolster its campaigning before the European elections in May.

There is no evidence that a deal was finalised, but the allegations, which initially emerged in February, led Italian prosecutors to open an investigation and raised questions about the relationship between the League and the Kremlin.

Alfonso Giordano, a professor of politics at Luiss University in Rome, said: “In all these months, we’ve tended to think that Conte is simply a puppet between the two coalition partners.

“Finally, he is taking a more autonomous, authoritative position. He won’t attack Salvini, as that would be an attack against his government, but he will be seeking to reinforce his position.”

The “Russiagate” allegations may have dominated Italian media but have been met with indifference by supporters of the League, which has risen to 37.8% in the polls in recent weeks.

Prof Mattia Diletti from Sapienza University in Rome said: “Salvini knows that Italian people don’t care too much about the Russiagate. He also knows if he answers to parliament, it would be negative for him. But he really doesn’t care about institutional etiquette, he only cares about communication and consensus.”

Salvini has been nurturing ties with Russia since he became leader of the League in 2013 and has always made a show of his admiration for the Russian president, Vladimir Putin.

M5S is also Russia-friendly and in the past has faced accusations of being influenced by the Kremlin. Luigi Di Maio, the M5S leader and deputy prime minister, welcomed Putin alongside Salvini during the Russian leader’s state visit to Rome on 4 July. Conte also promised Putin that Italy would work towards helping mend Russia’s fractured relations with the EU.

In this respect, while Conte will probably tell parliament there needs to be an investigation into the illegal funding allegations, he is unlikely to say anything tough about Russia.

Russiagate aside, there are other issues threatening the coalition’s survival. The two partners have been at odds for months, with Salvini and Di Maio often trading insults and ultimately stalling progress on government policy. Speculation of an imminent government collapse was rife last week when Salvini declared he had lost all confidence in M5S, after the party backed Ursula von der Leyen to become president of the European commission.

The League opposed the German candidate, snubbing an instruction from Conte for both parties to vote for her. Salvini accused M5S of betraying its promise to ordinary voters of bringing about radical change in Europe.

Salvini and Di Maio had patched things up by Monday, but there is pressure on Salvini from within his ranks to seize on his popularity and pull the plug on an administration that some League ministers say has become untenable.

Salvini has put the onus on the weakened M5S, threatening to quit unless the party drops its opposition towards key League policies, such as granting greater fiscal autonomy to the Lombardy and Veneto regions – the party’s strongholds.

Conte has also taken control of this issue and is expected to present a proposal on Friday. By the same day, he must also decide on a contentious high-speed rail project linking Italy and France that M5S vehemently opposes and the League backs.

But most analysts expect the government to at least make it as far as drafting its 2020 budget in the autumn, with a potential cabinet reshuffle taking place to ease tensions in the meantime. Salvini has called for the M5S transport minister, Danilo Toninelli, and the defence minister, Elisabetta Trenta, to go.

Franco Pavoncello, a politics professor and the president of John Cabot University in Rome, said: “I’m not so sure there is interest on Salvini’s part to make this government fall right now … We might see a reshuffle rather than a collapse.”