Yegor Zhukov, a political science student at Russia’s prestigious Higher School of Economics, faces eight years in prison over controversial “mass unrest” charges. The Kremlin’s critics think the charges are a scare tactic to crush Russia’s largest protests in years, set to continue for their fourth weekend on Saturday.

The young face of Moscow’s protests, a 21-year-old libertarian with 123,000 followers on YouTube, appeared in court on a television screen this week.

From a jail cell, Zhukov unleashed a broadside at the political system pieced together by Vladimir Putin, who was confirmed as prime minister for the first time 20 years ago on Friday.

“I want to thank our government for the enormous amount of work it does every day to discredit itself,” said Zhukov by video link on Thursday. “Truly, it’s hard to find anyone who has done more to increase the numbers of the opposition than the Russian government.” 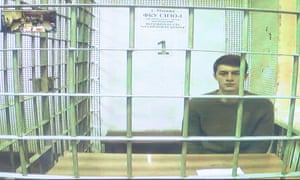 Yegor Zhukov, who was detained during a recent protest for fair elections, appears in a Moscow court via video link. Photograph: Evgenia Novozhenina/Reuters

Like many protesters, Zhukov was a child in 1999 when a 46-year-old Putin was named the country’s next prime minister, launching a generation of rule under the former intelligence officer. For many, Putin has become synonymous with the state, less politician than historical figure, and an arbiter of conflicts.

Just in the past year, despite his attempts to install reliable allies across the country, protests have broken out over multiple rubbish dumps, a church in Yekaterinburg, internal borders in the North Caucasus, and now city council elections in the capital.

Putin has not been the main focus of ire of these latest protests, which were prompted by the disqualification of independent candidates such as Zhukov from a low-level election.

But the officials he installed have.

They include the Moscow mayor, Sergei Sobyanin, who served as Putin’s chief of staff, and Russian elections commissioner, Ella Pamfilova, who Putin appointed in 2016 to return trust to Russia’s voting system. 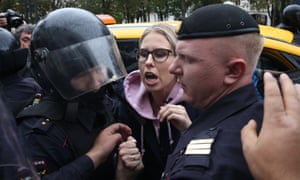 In fact, as Lyubov Sobol, another protest leader, pointed out this week, the leading curator of Russian politics, Putin’s first deputy chief of staff Sergei Kiriyenko, and Moscow’s elections commission head, have also been in government for decades, holdovers from the difficult 1990s.

“It’s all his system, isn’t it?” Mikhail Kostomarov, a 24-year-old protester, said of Putin last week.

Since the last large round of protests in 2011-12, Muscovites have largely been won over by a campaign of urban improvements in exchange for political choice, an update on Putin’s own bargain that offered Russians economic stability above all.

But that system seems to have calcified, failing to mollify a core group of protesters or keep up with the hopes of a younger generation of Russians.

“The pace of life has caught up with the pace of this president,” said Konstantin Gaaze, a political analyst. “The gap between what happens in politics and real life is growing. There is a kind of fatigue.”

Cautionary tales about life before Putin carry less weight with young people. In a piece for the Russian-language site Meduza this week, the sociologist Olga Zeveleva called warnings about the lawless 1990s “one of the Putin administration’s foundational myths”, and one that fails to resonate with protesters born in the 2000s. 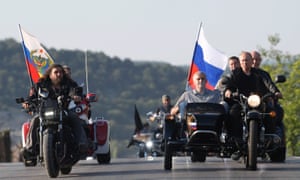 The Kremlin – and Putin – also appear out of touch on a cultural level. While Moscow protested last week, Putin was riding motorcycles with an ageing biker gang, the Night Wolves, whom he has tried to sell as positive role models for young people. The Kremlin’s stable of entertainers lacks young stars, particularly those on social media sites such as YouTube.

“People like blogger Yury Dud can speak to young people,” said Gaaze, referring to a popular sports journalist and interviewer who attended last week’s protest. “Who does the Kremlin have now besides rapper Timati?” Oxxxymiron, another popular hip-hop artist, joined the protests last week, and on Thursday offered to post bail at Zhukov’s hearing.

The Kremlin has responded by saying it has paid little attention to the protests. “We do not agree with those who call what is happening a political crisis,” Putin’s spokesman, Dmitri Peskov, said.

That may be true. According to insiders, Putin is not receiving daily updates on the protests as he did in 2011-12 when demonstrations attracted more than 100,000 people. 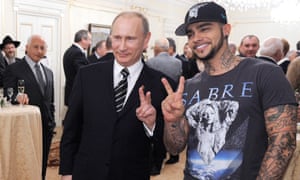 Putin poses with the rapper Timati during a meeting with his campaign activists in Moscow in March. Photograph: Alexey Druzhinin/AFP/Getty Images

But it also risks Putin seeming indifferent to what is happening in the country.

“His only plan is to hold on to power and to deal with geopolitics,” said Sobol, the protest leader who was also a candidate for the city council. “It seems like what’s happening inside of Russia doesn’t bother him and he doesn’t think about Russia’s economic growth.”

The protests are an irritant, but have little chance of toppling the Kremlin. Still, they are widely viewed as mismanaged by the authorities, which have turned an obscure election into an opposition cause célèbre. And they come as Putin’s ratings have reached historic lows, largely due to stagnant wages and a decision last year to raise the pension age.

“You can’t say his ratings have collapsed,” said Gaaze. “It’s more correct to speak about an erosion of his rating. But it will continue.”