People are sleeping in the open, with just olive trees to shelter them and their families. Their most pressing needs are for clean water, toilets, and showers, but the UN has diverted the little funding available to fuel and heating. As a result, more than 40,000 people are thought to have contracted a tropical disease. When I was speaking to an elderly woman who had taken shelter in the open fields, she cried out for a toilet – it was the one thing she said would restore her dignity.

Most of my country is in ruins. But the worst crisis of Syria’s conflict is unfolding now. Beautiful cities have become ghost towns, their inhabitants forced to flee the country or pushed into one of the last remaining areas outside of Assad’s control. More than 3 million people, half of whom are children, are trapped in Idlib, where a tyrant is unleashing horror from the sky. It’s the largest displacement crisis of the 21st century and yet Idlib’s people have been abandoned by the world.

After eight years leading teams of volunteer rescue workers, the White Helmets, I thought I had seen all the horrors possible. But looking at the state of Idlib today, I can honestly say it’s the worst my country has been.

More than 180,000 families have fled their homes since April but a mere 9,000 tents have been provided in recent months. Schools and community centres are overcrowded with people looking for somewhere to sleep, preventing children from going to classes, and displacement camps are close to breaking point. The ceasefire broke again this week, and the bombs are likely to push yet more families to the overcrowded camps. In August, 40,000 people left their homes in fear for their lives in just 24 hours.

Since 26 April, the Syrian regime and Russia have pounded Idlib with a ferocity we have rarely seen before. Almost 1,000 civilians have been killed and many more severely injured. As with previous major escalations in the conflict, the war planes target our rescue workers, medical personnel and humanitarian facilities as a tactic to prevent help reaching the population.

At a time when people are in urgent need of healthcare, more than 50 aerial attacks on hospitals and medical facilities have been recorded in the past six months, many with patients still being treated inside. After pressure from two-thirds of the UN security council, the secretary general finally launched an inquiry into the bombing of hospitals in Idlib in August, which must mean justice for the war crimes still being committed today. 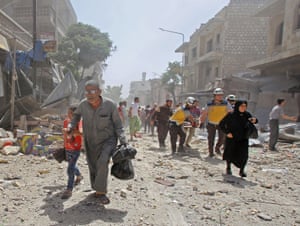 Members of the White Helmets carry a wounded man after a reported airstrike on the town of Maaret al-Numan in Idlib province, June 2019. Photograph: Abdulaziz Ketaz/AFP/Getty Images

Nine of my White Helmet teammates have been killed, seven in “double-tap” airstrikes that target rescuers arriving at the site of the bombing.

Yet local humanitarian groups are working with virtually no backing from the international community. The UN funding allocation for the crisis in Idlib is just 6% of the amount needed to provide vulnerable people with the basics – food, clean water and sanitation services.

With little sign that the United Nations is stepping up its response, people are scared and desperate. But as the crisis worsens, there’s the possibility that this emergency could mean millions more refugees seek safety in Europe, a reality that could finally shake world leaders from their stupor.

By destroying hospitals, rescue centres and schools, the Syrian regime and Russia are waging a physical and psychological war against the people of Idlib, hoping to squash their hope and strangle the essential services they rely on to survive. They want to destroy all aspects of life and leave them with no option but to flee.

But we refuse to let go of hope or to believe, as Assad and Putin want us to, that Syrian lives and international humanitarian law no longer matter. Every White Helmet volunteer has made a pledge to stand up for humanity and human rights, guided by our motto: “To save a life is to save all of humanity.”

Today I ask the United Nations and the international community to finally step up with urgency and increase funding for shelter, water and sanitation, health and education in north-west Syria. They must pressure the Syrian regime and Russia to abide by multiple UN resolutions and stop the attacks on civilians. Syria has been the UN’s catastrophic failure – but it’s not too late to act.

Thousands to march in Moscow in support of Russian journalist