A deal on forming a government in Italy between the Five Star Movement and the opposition Democratic Party (PD) looked close on Monday after the PD indicated it had dropped a veto on Giuseppe Conte serving another term as prime minister. 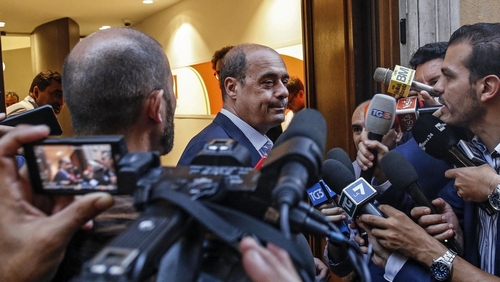 Conte, who belongs to no party but is close to Five Star, resigned last week after the collapse of a 14-month coalition between Five Star and the far-right League, brought down when League leader Matteo Salvini pulled out.

President Sergio Mattarella has given Five Star a chance to avert a snap election by forming a new coalition with the PD. Last week, he told them to report back by Tuesday, but on Monday, he extended the deadline by an extra day to Wednesday.

Conte returned to Rome from a G7 meeting in Biarritz, France, for a meeting with Five Star leader Luigi Di Maio and PD chief Nicola Zingaretti.

His reinstatement, insisted on by the anti-establishment Five Star but previously resisted by the centre-left PD, had been presented as the main stumbling block to a deal between the two traditionally antagonistic parties.

“There are no vetoes, we want to talk about policies,” the PD’s Senate leader Andrea Marcucci told reporters asking him about the party’s previous rejection of Conte, as he left a meeting of its top brass, including leader Zingaretti.

Five Star chiefs gathered in a Rome apartment on Monday before Di Maio left to meet briefly with Zingaretti at the prime minister’s office.

“We are working to give Italy a new government… I think we are on the right track. I am optimistic,” Zingaretti told reporters after the meeting with Di Maio.

“We need to put together a 2020 budget which requires a new, serious and authoritative government,” he added, declining to answer questions about Conte’s role.

Zingaretti said that a lasting government was his goal.

“Assembling a government is a serious thing, we’re serious persons,” Zingaretti said. “We don’t want to form another one like the last one that collapse after 14 months.”

Five Star has been divided between factions who favour a deal with the PD and others who believe it would shatter the party’s anti-establishment image and accelerate a decline in voter support it has suffered over the last year.

Conte was a virtually unknown lawyer when he was chosen by the League and Five Star to lead their government following an inconclusive March 2018 election. He is now Italy’s most popular politician, according to opinion polls.

How to Design a Seamless Pattern Using the Procreate App

League chief Salvini abandoned his coalition with Five Star, hoping to capitalise on a surge in his anti-immigrant party’s popularity in a new election. But the move has backfired with Five Star and the PD seeking to form a new coalition instead, which would push the League into opposition.

Only the president can dissolve parliament, and he will do so only if parties are unable to form a new government. He has made clear that if the talks break down he will call an election for the autumn.

Mattarella will meet minor parties at his palace on Tuesday, before hearing the PD on Wednesday at 14:00 GMT and closing his consultations with Five Star at 17:00 GMT.

The League, fearing its bid for elections has failed and it will be sidelined, has tried to resurrect its coalition with Five Star, and reacted angrily to growing signs of a Five Star/PD deal.

“The people should rise up as quickly as possible,” said the League’s minister for families Alessandra Locatelli.

“If necessary, we will be the first to protest in the streets because we cannot afford another government that massacres the interests and the rights of Italians.”

Salvini almost sounded resigned on Monday night that his power play to win new elections soon would be thwarted.

“It seems like a government is being born with the goal of power being the only glue” holding the would-be coalition together, Salvini told reporters. All that’s left to do for the Democrats and Five Stars is the “divvying up of the ministries, the undersecretaries” and so on.

“The high road is voting,” Salvini insisted. Any new government would be “betrayal of the popular will”, he said.

Opinion polls suggest the League has lost between five and seven percentage points since pulling the plug on the government, though it remains easily the most popular party, followed by the PD and Five Star.