Ukraine’s SBU security service said in a Facebook post it had seized the Russian tanker Nika Spirit in Izmail, a Danube river port near the country’s border with Romania. 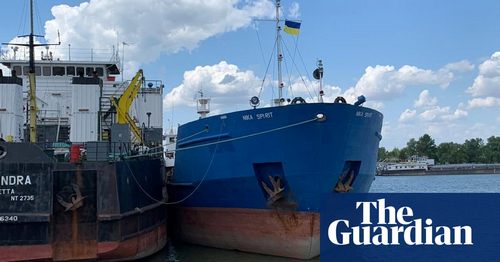 Ukrainian authorities have seized a Russian tanker moored in a river port near the Black Sea in apparent retaliation for Russia’s seizure of three Ukrainian vessels and arrest of 24 sailors in November last year.

The SBU said it had seized documents from the ship and questioned its crew. It also released a video showing its officers and those from the military prosecutor’s office boarding the vessel. It was not immediately clear if the crew had been arrested. Russia threatened a swift retaliation if arrests were made.

The Russian foreign ministry said in a statement: “We are looking into the circumstances of the incident before taking proper measures. If this amounts to taking Russians hostage, this will be qualified as a blatant violation of international law, and consequences will not be long in coming.”

The Russian agency Interfax, citing an unnamed source, said there were about 15 sailors currently on board the ship, all believed to be Russian citizens, and said they were all “feeling fairly well”.

The SBU said the vessel had previously been called Neyma and had taken part in blocking the three Ukrainian ships in the Kerch strait last year, with the owners apparently changing its name to Nika Spirit to avoid detection.

Russia annexed Crimea in 2014 and has built a bridge over the Kerch strait, which separates the peninsula from Russia. Ukrainian ships have to pass through the strait to exit the Sea of Azov. The 24 sailors seized during the November incident in the strait have been held in Russian prisons since.

Moscow accused the ships of illegally entering Russian territorial waters, which Kyiv denies. The Hamburg-based International Tribunal for the Law of the Sea has condemned Moscow over the incident and said it should release the sailors.

The newly elected Ukrainian president, Volodymyr Zelenskiy, has said bringing the sailors home is a priority, and the move to seize the Russian vessel comes after the comedian-turned-president won an overwhelming victory in parliamentary elections over the weekend.

Zelenskiy spoke to Russia’s president, Vladimir Putin, by telephone for the first time last week and discussed a possible prisoner exchange, and there was a sense that there could be a deal soon involving the 24 sailors. Last week, however, a Moscow court ruled that the sailors should stay in custody for a further three months.

The head of the Russian parliament’s international affairs committee, Leonid Slutsky, on Thursday branded Ukraine’s move against the Russian tanker “state-sponsored piracy” and said it was “unlawful and illicit pressure on the investigation” into the Ukrainian sailors seized by Russia.