German charity vessel captain Carola Rackete, who sparked global headlines by forcibly docking in an Italian port with rescued migrants, has been probed by a Sicilian prosecutor for allegedly aiding undocumented immigration. 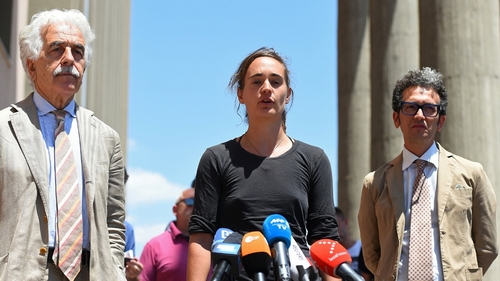 Her supporters outside the court held aloft a banner that read “Saving lives is not a crime” as the captain of the migrant rescue vessel Sea-Watch 3 spoke to reporters after the questioning on Thursday.

“I sincerely hope that the European Commission now, after the new election of the parliament, will do its very best to prevent situations like that happening again and that all European countries will work together… to accept any people which the civilian fleet has rescued,” she said, speaking in English.

Rackete was arrested on June 29 for entering the Sicilian port of Licata on the island of Lampedusa, despite a veto imposed by Italy’s far-right Interior Minister Matteo Salvini, to land 40 migrants who were blocked at sea for over two weeks.

She was released three days later, but remains under investigation in separate criminal cases related to undocumented immigration. If convicted, Rackete could face up to 15 years in prison.

Meanwhile, the Sea-Watch 3 ship remains in police custody in Licata.

For her efforts, the parliament of Catalonia in Spain on Tuesday voted unanimously to honour Rackete with the Gold Medal, its highest award.

Meanwhile, UN human rights experts on Thursday expressed “grave concern” over the detention and criminal proceedings in Italy against Rackete.

“Rescuing migrants in distress at sea is not a crime. We urge the Italian authorities to immediately stop the criminalization of search and rescue operations,” the rights experts said in a statement.

“This prosecution could have a chilling effect on migrant rights defenders and on civil society as a whole,” said Michel Forst, special rapporteur on the situation of human rights defenders.

A total of 30,510 migrants had died between 2014 and 2018 while making the treacherous journey to Europe, the UN agency had said in January this year.

Russia and Ukraine exchange prisoners in move to improve ties