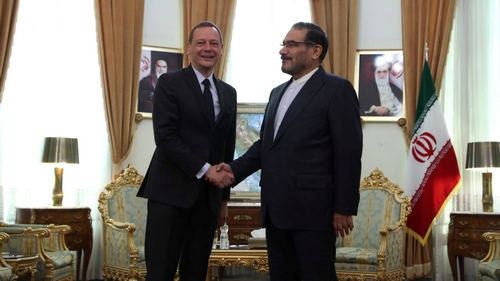 French President Emmanuel Macron’s top diplomatic adviser has held talks in Iran to ease the crisis over Iran’s nuclear deal with world powers, prompting Tehran’s praise for French efforts to save the 2015 accord.

The French presidency’s office said Bonne was in Tehran “to piece together a de-escalation” strategy after Iran on Monday threatened to restart deactivated centrifuges and ramp up the enrichment of uranium to 20 percent purity.

“The French are part of efforts… to keep the nuclear deal alive,” Mousavi was quoted as saying.

Tehran has been pushing the European signatories to the accord, including France, Germany and the United Kingdom, to protect Iran from United States sanctions, which Washington reimposed after leaving the pact last year.

The 2015 deal between Iran and world powers had been described as a triumph of diplomacy against unilateralism and a major step to counter proliferation.

The accord promised sanctions relief, economic benefits and an end to international isolation of the Islamic republic in return for stringent curbs on its nuclear programme.

But after the US unilaterally withdrew in May 2018 and reimposed stinging sanctions on Iran, including on its important banking and oil sectors, the future of the accord became uncertain.

As the Iranian economy went into freefall, Tehran demanded that the other parties to the deal, especially France, Germany and the United Kingdom, deliver the promised economic benefits and help it bypass US sanctions.

While the EU has established INSTEX, a payments mechanism designed as a workaround to US sanctions, Iran has said it did not meet its requirements and would need to be able to facilitate oil trade to be useful.

Tehran has since changed tack, saying it would reshape its policy of “strategic patience”.

In May, a year after Trump’s withdrawal, President Hassan Rouhani said that Iran would roll back its commitments under the deal in stages every 60 days in an effort to pressure the other parties to deliver on their side of the bargain.

As tensions rose, the US dispatched a naval carrier, bombers and extra troops to the Gulf region to counter perceived threats from Iran.