After a largely lacklustre campaign dominated by disappointment over the pace of the country’s economic recovery, polling stations on Sunday opened across Greece at 7am (04:00 GMT). They will close 12 hours later, when initial exit polls will be published. 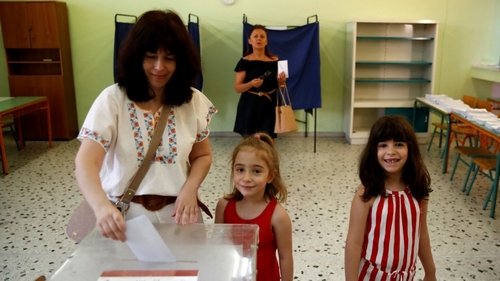 Greeks are heading to the polls to elect a new parliament, in a snap vote that all opinion polls predict will put an end to more than four years of leftist rule.

Prime Minister Alexis Tsipras, 44, called the election three months before the end of his term after his left-wing Syriza suffered a crushing 9.5-percentage point defeat in May’s European Parliament elections.

Waiting in the wings to replace Syriza is the centre-right New Democracy party, led by Kyriakos Mitsotakis, the 51-year-old son of a former prime minister and brother of an ex-foreign minister.

He is seeking an absolute majority in the country’s 300-member parliament, a result that will mark a major shift for the crisis-hit country run for nearly a decade by fragile coalitions of ideologically divergent parties united by their stance either in favour or against Greece’s bailout deals.

The projections, coupled with the fact that the election is being held for the first time in the middle of summer, a time when many Greeks are either on holiday or holding temporary tourism jobs far from their homes, has shifted attention on turnout.

Both Tsipras and Mitsotakis have called on their supporters not to assume Sunday’s result is a foregone conclusion and to go out and vote.

Tsipras used the final days of the election campaign on a tour through some of Greece’s biggest cities, insisting he can pull off a comeback.

The election on Sunday comes as Greece still struggles to emerge from a nearly decade-long financial crisis that saw its economy shrink by a whopping 25 percent and hundreds of thousands of mostly young people leave the country in the hopes of better opportunities abroad.

But despite its promises to end austerity, the Syriza-led government seven months later caved in to the European Union and the International Monetary Fund (IMF)’s demands, signing onto a third bailout deal and implementing further tax hikes. Still, it managed to regain power in a snap election in September 2015 and form a coalition government with the nationalist Independent Greeks party.

According to official figures, 9,903,864 people, including nearly 520,000 first-time voters are registered to cast ballots. Greeks living abroad are not allowed to vote.