A Ukrainian filmmaker who became a symbol of defiance against President Vladimir Putin’s expansionist vision of Russia has finally collected the European Union’s highest human rights honour, a year after it was awarded to him.

Oleg Sentsov was named as the recipient of the Sakharov Prize for Freedom of Thought last year while imprisoned by Russia on charges of conspiring to commit “terrorism”. Sentsov has always denied the charges.

The 43-year-old accepted the prize, which celebrates individuals or organisations who fight for human rights and fundamental freedoms, at a ceremony at the European Parliament in Strasbourg, France, on Tuesday.

David Sassoli, president of the European Parliament, paid tribute to Sentsov’s “courage, determination and sense of honour” as he presented the filmmaker with the award.

Sentsov called the prize “a huge honour and also a huge responsibility”, saying he accepted it on behalf of all Ukrainian political prisoners in Russia and those fighting for Ukraine’s freedom.

During his speech, Sentsov also lambasted Putin, warning against efforts by the Russian government to support peace in Ukraine.

“They want to see Ukraine on its knees,” he said, before urging the assembled members “not to forget” the country’s soldiers, political prisoners and marginalised ethnic groups while dealing with Russia.

“Long live Ukraine,” he said, flashing a victory sign before leaving the podium.

One of the most vocal opponents of the annexation of his native Crimea, Sentsov – an ethnic Russian – was arrested by Russian security forces shortly after the 2014 takeover, and sentenced to 20 years in prison.

He had studied economics in the Ukrainian capital Kyiv before taking courses in film directing and screenwriting in Moscow. His first feature film, Gamer, premiered at the Rotterdam International Film Festival in 2012 and its success helped Sentsov secure funding for his next project.

However, his focus shifted to activism when Ukraine’s Euromaidan protests broke out in 2013. During the uprising that toppled President Viktor Yanukovych, Sentsov helped to deliver food and supplies to Ukrainian military personnel stranded in their Crimean bases, eventually evacuating the troops to safety.

He was arrested in Crimea, along with four others, on suspicion of plotting attacks on bridges, power lines and monuments in the territory.

Under the Geneva Conventions, an occupying power cannot forcibly remove people from a territory, however, Russia “regularly does so”, according to Amnesty International Ukraine’s Maria Guryeva, who noted the continuing arrests of Crimean Tatars in the territory.

“Russia has no right to transfer people from Crimea to its territory as they usually do. It’s a violation of international law,” she told Al Jazeera. 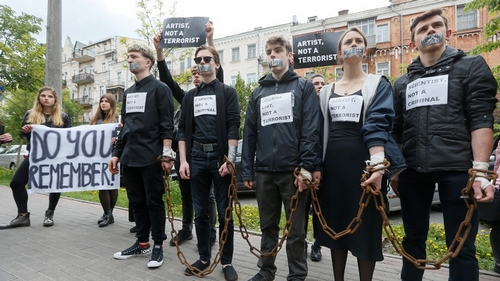 Sentsov was held without charge for three weeks and waited more than a year for trial, sparking an outcry among international rights groups and fellow filmmakers, including European directors Ken Loach, Pedro Almodovar and Wim Wenders.

When the trial eventually came, Sentsov’s lawyer told reporters he believed the best-case scenario would be for Sentsov to be exchanged “for some other people in Ukraine who are important to Russia”.

During his detention, most of which was spent in a Russian penal colony, Sentsov went on a hunger strike to demand the release of all political prisoners in Ukraine. The protest lasted 145 days, before Sentsov ended it to avoid force-feeding by prison authorities as his health deteriorated.

“When he demanded the release, not of himself, but of all the Ukrainian political prisoners in Russia, for sure he attracted a lot of support and initiated a wave of solidarity with him,” Sergey Davidis, a board member of the Moscow-based Memorial Human Rights Center told Al Jazeera.

“The personality of Oleg Sentsov and his bravery attracted a lot of attention and, for us, it was rather important,” Davidis said, adding that Sentsov came to represent non-violent dissent to the annexation of Crimea.

Controversies surrounding recanted testimony, torture allegations and the deputy prosecutor general’s refusal to reconsider the charges against Sentsov led to him being considered a political prisoner by the EU and the United States – among others – who called for his release.

After more than five years, Sentsov was eventually freed in September in a prisoner swap aimed at easing tensions between Russia and Ukraine. He and 34 others were greeted by Ukrainian President Volodymyr Zelenskyy upon arrival in Kyiv.

Since his release, he has visited London, spoken about his latest book at a literary festival in Ukraine and joined a rally in support of Ukrainian political prisoners still held by Russia.

Exact figures vary – as does the definition of what constitutes a political prisoner – but local groups working with Amnesty and Memorial Human Rights Center say that more than 80 Ukrainians are imprisoned in Russia on political motives.

“No one really knows the scale of the problem, we just know that there are a lot of people,” Guryeva said, adding that the prisoners often face inhumane conditions, with little access to medical or legal assistance. 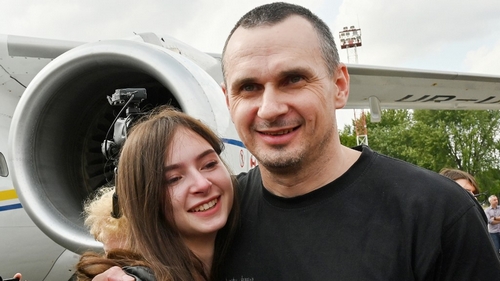 Sentsov hugs his daughter, Alina, on his arrival in Ukraine File: Sergei Supinksy/AFP

Whether he will get in the director’s chair again remains uncertain, though he reportedly wrote several film scripts while imprisoned, but Sentsov seems eager to use his status to draw attention to those still behind bars.

“I am, like many others, glad that he and 34 other political prisoners were released, it was a very happy day for us,” Davidis said. “But there are a lot of Ukrainians and Russian citizens in Russia being persecuted unlawfully with obvious political motivations.