Another result, from Cavan-Monaghan: 55.5% yes, 44.5% no. And the Taoiseach has arrived at Dublin Castle, says RTE2’s man on the spot: 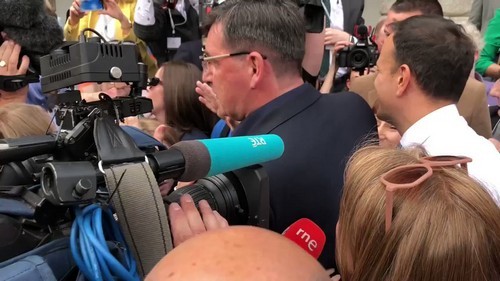 We are now poised to be the only place within these islands without access to abortion. I hope with all my heart that the forces that campaigned to repeal the 8th will now lend us a hand in dragging our laws into the 21st century.

Pete Doughty, a civil servant from Belfast, would like to see legislation change too:

Abortion is never, ever an easy option to choose … I’ve seen friends of mine here in Northern Ireland having to take that decision – and then having to travel, alone, stressed, in comparative secrecy, and at great expense, to England and back, at the expense of their dignity and peace of mind.

Women in Northern Ireland have always been under the same pressure as Irish woman, but after this result they will now, tragically, stand alone. That can’t be allowed to continue.

Westminster must now step in and give Northern Irish women the right to be believed and trusted that our socially conservative politicians will always wish to deny them.

Another couple of results, bringing us – according to RTÉ – up to 30 out of 40 constituencies:

Derek Mooney, a former Fianna Fáil government adviser, has an very interesting take on the scale of the yes vote and what lay behind it:

The general assumption right up to the last week was that yes would win decisively, with a comfortable margin, leaving the no side in the low-40s nationally and tipping just over the 50% mark in the western, more rural constituencies.

Not for the first time the voters proved the pundits wrong. And the movement to yes happened long before the first posters hit the lampposts. Many traditional, middle-ground voters – including those who still see themselves as pro-life – decided some time back that it was time to take the issue of abortion out of the Irish constitution.

This referendum was about nuance, and Irish voters showed that they get nuance. So do voters in most countries. They know that very few issues are simply black or white.

Many voters, including those who had real qualms about some aspects of what the government proposes in its legislation, accepted the nuances and complexities, considered them and – on balance – accepted the case for repeal.

This is the seismic change that has happened in Ireland today. In a world that seems destined to rush to this or that easy populist position, Irish voters took the time to inform themselves. They listened to the expert opinions from all sides and weighed the arguments.

The political system afforded them that opportunity by having a long pre-campaign period where arguments, for and against, were calmly made. If only the Brexit referendum had been handled so calmly and sensibly.

Three more Dublin results are in:

More from Sinéad Baker at the Together for Yes festivities in Dublin:

Those who flew home to vote are well represented at the yes campaign’s official gathering to watch the results.

I talked to Hannah Little, a co-founder of the London-Irish Abortion Rights Campaign, two weeks ago in London and then she spoke of the importance of the result for many of the Irish living abroad.

“A lot of people have plans to go home and have a family,” she said. “I think this referendum will signal whether Ireland is a country we want to bring children up in.”

Catching up with her at today’s event, she said that today’s result would “absolutely” hearten Irish women around the world. “It shows us the country has grown up and matured. It cares about women.”

A lot women that I’ve spoken to today have expressed similar sentiments. “I’m proud to be Irish,” is a common refrain.

Back in Roscommon, Lisa O’Caroll has met more cheerful voters – and one not so happy.

I’m delighted with result says Caitlin McConn, who runs Harlows pub in Roscommon. “My mum, my dad, sister, brother-in law all voted yes”. But Claire Feeley, 38 (not pictured) said she was “disappointed and shocked” at Roscommon result pic.twitter.com/CQa2qOfmOx

The DUP has spoken, and it’s not happy about the prospect of abortion law reform in Northern Ireland:

The DUP says it will “not be bullied” into accepting abortion reform in Northern Ireland https://t.co/Nhu2OGypqW

Another clutch of results, still all one-way traffic:

It is not as simple as Theresa May and the British government deciding to impose or extend the 1967 Abortion Act to the region – the only part of the UK where terminations in most cases are illegal in local hospitals.

Devolution is currently in suspended animation in a traditional orange-green row over an Irish Language Act and other cultural issues and even if the Northern Ireland assembly was restored, a majority of members oppose abortion reform especially on the unionist benches.

Pro-abortion reform parliamentarians at Westminster such as Stella Creasy could move a private member’s bill in this hiatus period of de facto direct rule from London. But when this was tried recently by another Labour MP for gay marriage equality (another social reform blocked principally by the DUP), backbench Tories refused to cooperate and the private bill fell by the wayside.

It is hard to see too how May’s minority Conservative government would agree to a free vote on introducing abortion into Northern Ireland given the power the DUP exercises at Westminster where its votes keep her in No 10 Downing Street.

The DUP would be highly likely to exert its parliamentary muscle to pressurise the Tories not to back any Labour sponsored private member’s bill when it came to the abortion question. The abortion controversy on the island of Ireland will rage on, albeit only now on the northern side of the Irish border.

The national broadcaster RTÉ says the final national results should be announced within an hour.

Some readers who’ve got in touch with the Guardian have described how difficult the referendum campaign has been because of the sensitivity of the issue.

Michelle, a writer and mother of two young boys who lives in Dublin, says she was one of the “silent” yes voters:

I was one of those women, partly because of the very conservative workplace that I am employed in of but also because I did not want to offend no voters, who did not discuss my opinions. Why, I wonder now, did I not feel comfortable to speak out, to be honest, to loudly shout how passionately I felt about the need for yes? Because I grew up in an Ireland that diminished the rights of women, punished women for being unmarried mothers and in some cases incarcerated those women and removed their children from them.

When she heard the result, Michelle said:

I felt like a weight had lifted, that shame and stigma surrounding so many women in my own family had been wiped away. It was acceptable at last for a woman to make her own decisions and live her life without judgment.

Kate, a scientist and mother living in rural Ireland, said she voted yes, but reluctantly:

Yes is the right decision but discussion needs to continue regarding support for women in Ireland. We need to examine our society at a deeper level and have more discussion about factors such as contraception, social housing … mental health. Abortion is the last resort for women. I would like to see both sides working together now to make family life better in this country and abortion as rare as possible.

It looks like Donegal is shaping up to be the only place to spoil the yes campaign’s party, reportedly by a very slender margin:

BREAKING: Based on tallies, Independent TD @ThomasPringleTD has told RTÉ that “it will be a No vote” in Donegal

Euro troll freed in Belarus after arrest for US selection tampering

Can music unite a young nation?