Investigators launched simultaneous raids on Tuesday morning on offices used by Navalny’s Anti-Corruption Foundation (FBK) and the homes of the foundation’s employees, less than a week after the group was officially declared a “foreign agent” by Russian authorities.

The Russian opposition leader Alexei Navalny has called a wave of raids by Russian authorities against his associates “probably the biggest coordinated searches in the country since 1938” – the final year of Joseph Stalin’s purges.

In a statement, Russia’s Investigative Committee said it was conducting searches at FBK offices in 30 locations across Russia. Security footage from the FBK’s Moscow headquarters showed masked riot police entering the offices.

The police seized documents and electronics as part of an investigation into alleged money laundering. The action follows similar raids on more than 200 locations last month, in what appears to be a concerted effort to shutter the work of the Kremlin’s most prominent critic.

Navalny, speaking to the Guardian aboard an Aeroflot flight from Moscow to New York on Sunday, said the allegations of money laundering were “plucked from thin air”, and the raids were really in revenge for the losses suffered by Kremlin allies in Moscow local elections last month.

“The tactical voting was a much more successful scheme than we thought it would be; it was a game-changer,” he said.

The electoral committee barred most opposition candidates from standing, prompting Navalny and his allies to create a tactical voting scheme to persuade disaffected Muscovites to vote for anyone but the Kremlin candidate.

Lyubov Sobol, one of Navalny’s allies who was barred from the vote, on Tuesday wrote on Twitter: “Shameless bastards from the Kremlin are seeking revenge for ‘Smart Voting’ and trying to destroy a network of our offices”.

Navalny spent much of the summer in prison on charges of calling for street protests, and suffered a suspected poisoning attempt while in jail over the summer as protests rocked the capital.

His FBK has published a series of investigations into corruption among members of president Vladimir Putin’s inner circle, which often garner millions of hits on YouTube. Branding the organisation a “foreign agent” appears to be the latest attempt to quash its activities. 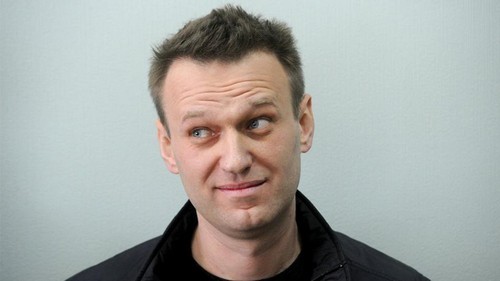 “We’re still trying to work out what it means in practice,” said Navalny. The most problematic consequence so far is that the foundation’s bank accounts, as well as the personal bank accounts of over 100 employees, have been frozen. “We have been getting lots more donations but all the money is frozen,” he said.

He said the accusation that the group had taken foreign money was based on a small donation from a mysterious donor in Spain made while the foundation’s account was already frozen. “We have been very careful about who we take money from. If it comes from abroad it’s impossible, because the bank just rejects it. But in this case it couldn’t be returned because the account was frozen,” he said.

Navalny said his team have been investigating the mysterious Spanish donor, and so far has found no evidence that either the firm or the individual actually exist, leading him to believe it may have been a provocation. “Knowing their work of late I wouldn’t be surprised if we end up finding that it was some kind of GRU firm,” he said, half-jokingly.

What you need to know about India’s BJP

Who is Alexei Navalny?

Born in 1976 just outside Moscow, Alexei Navalny is a lawyer-turned-campaigner whose Anti-Corruption Foundation investigates the wealth of Vladimir Putin’s inner circle.

He started out as a Russian nationalist, but emerged as the main leader of Russia’s democratic opposition during the wave of protests that led up to the 2012 presidential election, and has since been a thorn in the Kremlin’s side.

Navalny is barred from appearing on state television, but has used social media to his advantage. A 2017 documentary accusing the prime minister, Dmitry Medvedev, of corruption received more than 30m views on YouTube within two months.

He has been repeatedly arrested and jailed. The European court of human rights ruled that Russia violated Navalny’s rights by holding him under house arrest in 2014. Election officials barred him from running for president in 2018 due to an embezzlement conviction that he claims was politically motivated. Navalny told the commission its decision would be a vote ‘not against me, but against 16,000 people who have nominated me; against 200,000 volunteers who have been canvassing for me’.

There has also been a physical price to pay. In April 2017, he was attacked with green dye that nearly blinded him in one eye, and in July 2019 he was taken from jail to hospital with symptoms that one of his doctors said could indicate poisoning.

For several years, the Kremlin has struggled to deal with Navalny, mixing outright repression with banning him from the airwaves of state controlled television and attempting to marginalise him.

While nationwide opinion polls show he has limited political support, his anti-corruption investigations are popular and inside the Kremlin he is regarded as the one opposition figure who could pose a serious threat. Navalny said it was hard to guess how far the Kremlin was willing to go in its attempts to shut down his foundation.

“I don’t really know what their game plan is going to be. Russia will become more and more like Belarus, but they can’t put everyone in jail. We have the support of the street. Suppose you’re Putin, what do you do? OK, you put me and 100 other people in jail, and then next day people will come out with our portraits,” he said.