Boris Johnson and Jeremy Corbyn, the two candidates vying to be United Kingdom prime minister after next week’s general election, have traded barbs in their final televised debate before voters go to the polls on December 12. 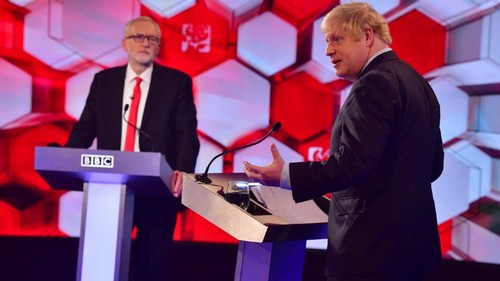 Both men relied on attack lines which have been tried and tested in the long weeks of the campaign so far, with incumbent Prime Minister Johnson repeating his “get Brexit done” mantra several times in the early rounds of the bout, and opposition leader Corbyn hammering points on the National Health Service and the integrity of the Conservative government.

In one notable exchange, Johnson said he was not aware of the comments made by Alexandra Hall Hall, the veteran diplomat whose excoriating resignation letter lambasting the government’s “half-truths” on Brexit was a major news item throughout the day on Friday.

Six days before the UK votes in its second national election in less than three years, the debate was seen as the last chance for Corbyn to squeeze Johnson’s lead in the polls, which mostly point to victory for the prime minister.

The two leaders set an ill-tempered tone to the debate by battling over how to leave the EU. Johnson ridiculed Corbyn’s support for a new referendum in which Corbyn has said he would remain neutral, while the Labour leader said the prime minister’s pledge to have the UK leave the European Union by the end of January would actually mean at least seven years of trade talks.

“There wasn’t a knock-out blow for either man, but both were more animated than they have been,” said Al Jazeera’s Paul Brennan, reporting from Minehead, where the two leaders were speaking.

“Jeremy Corbyn, in particular, was more energetic than I’ve seen him – at the same time, Boris Johnson was also animated and perfectly willing to speak over the moderator, the BBC’s Nick Robinson, as well as the leader of the opposition Jeremy Corbyn.

“The debate was much than Brexit, though, there were issues of security, of law and order and the issue of anti-Semitism. I have to say though, at one particular moment, when Boris Johnson was talking about anti-Semitism, he turned it back round to Brexit, which didn’t seem to be the right tone or the right time – but you could see how relentlessly the Conservatives are pressing Brexit as almost the single issue of this election, and how much difficulty Labour has had in the past month of broadening it out and bringing in things like the NHS and law and order into the debate.”

A YouGov snap poll taken in the immediate aftermath of the debate, asking who “won” – when “don’t knows” were removed from the response – returned the fateful ratio of 52 percent saying Johnson had come out on top, and 48 percent saying Corbyn had performed better – the same proportion of votes as in the Brexit referendum more than three years ago.

In the poll of 1,322 voters, 55 percent said Johnson was “likeable”, compared with 36 percent for Corbyn.

But 48 percent said Corbyn came across as more trustworthy – compared with just 38 percent for Johnson.

Earlier on Friday, Corbyn had gone on the attack, calling Johnson’s promises a fraud and saying his Brexit deal would simply be the start of years of “painful negotiations and broken promises”.

He also revealed a leaked government document which he said showed the divorce deal would lead to customs declarations and security checks between Britain and Northern Ireland, a direct contradiction to Johnson’s statements that it would not create any barriers between the province and the mainland.

The confidential Treasury report said the impact of the deal would be higher prices – and that 98 percent of Northern Irish exporters would struggle to bear the additional costs.

“There will be other secret reports like this one in every government department that reveal the disastrous impact of Johnson’s damaging deal,” Corbyn said.

John Major, Conservative prime minister between 1990 and 1997, on Friday urged voters to abandon the party as led by Johnson, and to support those former Conservatives – the “rebel alliance” – who were kicked out of the party for voting against the government to block a “no-deal” Brexit.

“When the nation voted on Brexit it did so on a diet of fiction and undeliverable promises,” he wrote in The Guardian on Friday.

“Without such talent on its benches, Parliament will be the poorer, which is why – were I resident in any of their constituencies – they would have my vote in this election.”

Despite having lost the endorsement of the former prime minister, Johnson did on Friday pick up the unequivocal support of notorious far-right Islamophobe Tommy Robinson.

“Everyone should vote for Boris Johnson,” he told reporters outside London’s High Court where he faces libel charges over comments allegedly made about a Syrian refugee who was attacked at school. Johnson has yet to reject the endorsement.

The bad news wasn’t confined to the Conservative leadership, however. Tony Blair, prime minister from 1997 to 2008, told an anti-Brexit rally, that although he was voting Labour, voters should make their own choices.

“If you look, constituency by constituency, you will know the best candidates to back. Back them.

“I know this election is horrible. It’s like finding your way through a maze where at every turn you find something shocking.”

The debate was, of course, only between the leaders of the country’s largest two parties – and the changing nature of British politics has seen smaller parties winning more support than the traditional two-dominant-party system allows.

Liberal Democrat Brexit spokesman Tom Brake said: “Tonight’s debate was British politics at its worst. Two leaders offering nothing new, nothing different and neither being honest about the pain Brexit will cause our communities.

“Johnson and Corbyn both proved tonight that they are unfit to lead our country and frankly their own parties.”

SNP Leader Nicola Sturgeon said: “It is clearer than ever that neither of these men should be able to determine Scotland’s future – they both represent a danger to our NHS and economy with their disastrous plans to ignore Scotland and drag us out of the EU against our will.

“Boris Johnson’s repeated attempts to con the public over his devastating Brexit deal and his failure to acknowledge the mistruths that have characterised his campaign demonstrate precisely why he is unfit for office.”