Up to 85% of people approved of the shift in Poland, eastern Germany and the Czech Republic, for example, but fewer than 55% did so in Bulgaria, Ukraine and Russia. This broadly mirrored very different perceptions of how individual countries had progressed since the momentous events of 1989-91, when a wave of optimism swept Europe as walls and regimes fell, ushering in more open societies and markets, the survey’s authors said.

Thirty years on, few people in Europe’s former eastern bloc regret the monumental political, social and economic change unleashed by the fall of communism – but at the same time few are satisfied with the way things are now, and many worry for the future.

A Pew Research Center survey of 17 countries, including 14 EU member states, found that while most people in central and eastern Europe generally embraced democracy and the market economy, support was far from uniformly strong.

Most Poles, Czechs and Lithuanians, and more than 40% of Hungarians and Slovaks, for example, said they felt most people in their countries were better off than 30 years ago; in Russia, Ukraine and Bulgaria, more than half felt things were worse.

Asked how they felt their countries had advanced, central and eastern Europeans were most positive about education (65%), living standards (61%) and national pride (58%). They were less happy about about law and order (44%) and family values (41%), and a majority (53%) said healthcare had got worse in the post-communist era.

But across all the former communist nations surveyed, people were “mostly pessimistic about the functioning of the political system, and about specific economic issues like jobs and inequality”, the survey’s authors said. 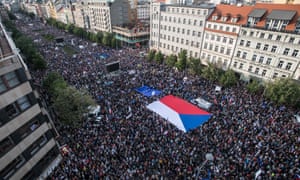 Demonstrators hold up a Czech and an EU flag during an anti-government protest in Prague in May. Photograph: Rene Volfik/AFP/Getty Images

There was widespread frustration with political elites, perceived as out of touch with average citizens, with 69% of people in the EU nations surveyed disagreeing with the statement that elected officials “care about what people like me think”, and a majority sharing the same view in Russia and Ukraine.

Central and eastern European nations also harboured a widespread view that politicians, and to some extent businesspeople, had benefited personally and excessively from the fall of communism, while “ordinary people” had largely not.

When it came to economic prospects for the future, however, former eastern bloc countries were more optimistic than the west: about 60% of Ukrainians, Poles and Lithuanians thought children in their country would be better off than their parents, against fewer than 25% in Greece, Spain, Italy, the UK and France.

Central and eastern European nations that joined the EU generally appreciated the institution and felt it had been good for their countries, the survey found, with the highest approval ratings – more than 80% – found in the former communist states of Poland and Lithuania.

In two that did not join, Russia and Ukraine, the situation looked very different, the authors said. “They are less approving of the shifts to democracy and capitalism, less supportive of specific democratic principles, and less satisfied with their lives,” they said.

The survey, which also included the US and was carried out among 18,979 people from May to August this year, found those who expressed a favourable opinion of the rightwing populist parties that have made significant advances across Europe in recent years were more likely to disapprove of the EU, feel Europe’s economic integration had been bad for their countries, and hold negative views of minority groups.

It also revealed a sharp east-west divide on attitudes to some social issues, with western Europeans expressing far more progressive views: 94% of Swedes and 89% of Spaniards said homosexuality should be accepted by society, for example, against 28% of Lithuanians and 14% of Ukrainians.

The survey found major differences remaining between east and west Germany, with east Germans less satisfied with their country’s overall direction and how democracy was working there than those in the west.

But life satisfaction in east Germany and in most central and east European countries has rocketed in the years since a comparable survey in 1991, when the former eastern bloc countries were grappling with the transition to democracy and a market economy.