Protesters gathered on Saturday at the central Prospekt Andreya Sakharova street for their fourth consecutive weekend demonstration over the exclusion of opposition and independent candidates from the Moscow city council ballot.

Tens of thousands of people demanding free elections have rallied in Russia’s capital, Moscow, in one of the country’s biggest political protests in recent years.

Some carried placards with slogans such as “Give us the right to vote!” and “You’ve lied to us enough,” while others held up pictures of activists arrested at earlier protests.

“I’m outraged by this injustice at every level. They’re not letting candidates stand who have collected all the necessary signatures. They are arresting people who are protesting peacefully,” said one protester, Irina Dargolts, a 60-year-old engineer.

The White Counter, an NGO that tracks participants in rallies, counted 49,900 people, while Moscow police gave a much lower attendance figure of 20,000.

OVD-Info, a monitoring body said 221 people were arrested at Saturday’s demonstration in Moscow and 80 in St Petersburg. A small number of other arrests took place in other cities, including Rostov-on-Don and Bryansk. 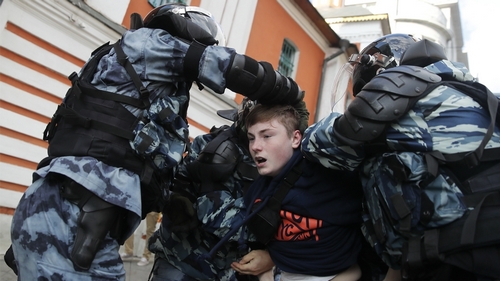 Hours before the protest, police detained a leading opposition activist, Lyubov Sobol, who is on a hunger strike to protest denied a place on the ballot.

Masked men raided her office and the police said they had information she and other activists were plotting a “provocation” at Saturday’s rally. A video on Sobol’s Twitter feed showed officers breaking into her office as she demanded an explanation for their actions.

“I won’t make it to the rally but you know what to do without me,” she wrote on Twitter.

Sobol is an ally of opposition leader Alexei Navalny, who is serving a 30-day prison sentence for breakinga protest law in July.

Most opposition candidates banned from participating in the Moscow election have now been jailed for violating protest laws.

One of the speakers at the rally was the wife of opposition politician Dmitry Gudkov, who is serving a 30-day sentence.

“Each of us has the right to run for office and they are very afraid of that,” said Valeriya Gudkova.

“We have real support from the public and they just have criminals in their electoral commissions.” 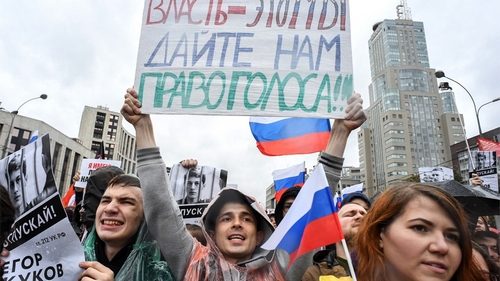 A protester hold a sign reading “The power, it’s us. Give us a vote!” Yuri Kadobnov/AFP

Victor Olevich of the Moscow-based think-tank, Centre of Actual Politics, told Al Jazeera that previous police crackdowns on protests appear to have been counterproductive as the number of people attending the protests has increased.

“The number of protesters matters because the more protesters attend these events, the more influence protesters are going to have to reach some sort of a compromise with the authorities,” Olevich said.

“A compromise may include changes to city election laws that… would make sure that in the next election cycles, this is not repeated,” she said.

“We are going to see in the next few weeks and months what that compromise is going to look like.”

Al Jazeera’s Step Vaessen reporting from Moscow said that protesters are now also demonstrating against “the crackdown, the repression that authorities committed after the protests started.

“Thousands have been detained and some people are facing very serious criminal charges and years in prison for what human rights organisations call peaceful protests,” Vaessen said.

“People are really fed up; that’s why they’re here to show to the government that they are having a right to protest.” 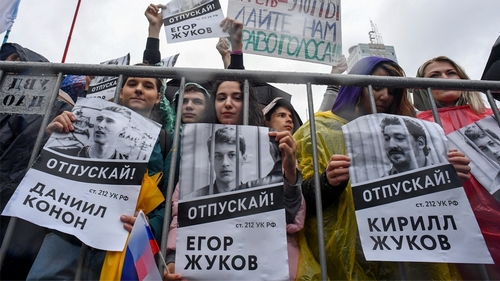 Some opposition figures called for an unauthorised march to follow Saturday’s permitted rally.

“After the demonstration, we’re going for a walk round Moscow,” Navalny’s team wrote on social media.

But police in Moscow issued a warning against the move, saying unsanctioned protests would be “immediately halted”.

Saturday’s protest came as authorities mounted their harshest attack yet on Navalny’s team, focusing on his anti-corruption foundation which publishes investigations of officials close to President Vladimir Putin.

“This is the most aggressive attempt yet to gag us,” Navalny wrote in a blog entry he issued through lawyers.

Conte returns as Italian PM as far-right booted from power

Bosnia is close to the edge. We need Europe’s help