The revelation on Wednesday came from Christopher Anderson, who was a senior aide to the special envoy on Ukraine, Kurt Volker, in November 2018, when Russia fired on and captured three Ukrainian vessels in the Sea of Azov off the Crimean peninsula. 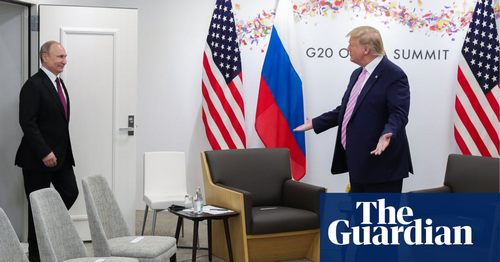 The White House blocked the US state department from issuing a statement condemning Russia for seizing Ukrainian military vessels, according to a state department official, in the latest example of the strain the Trump administration is under in pursuing conflicting policies towards the two countries.

“While my colleagues at the state department quickly prepared a statement condemning Russia for its escalation, senior officials in the White House blocked it from being issued,” Anderson said in his prepared remarks to congressional committees holding impeachment hearings. “Ambassador Volker drafted a tweet condemning Russia’s actions, which I posted to his account.”

In the face of silence from the White House, the then US ambassador to the UN, Nikki Haley, condemned Russian behaviour, after which the secretary of state, Mike Pompeo, followed suit. Trump voiced concern but did not blame Moscow.

The 24 Ukrainian sailors detained in the operation were returned last month as part of a prisoner exchange.

Anderson, and his successor in the Ukraine job, Catherine Croft, both testified to House committees on Wednesday about the role played by Trump’s personal lawyer, Rudy Giuliani, in foiling state department efforts to bolster the president, Volodymyr Zelenskiy, in the face of Russian military intervention in eastern Ukraine.

In his testimony, Anderson quoted the former national security adviser, John Bolton, as saying: “Giuliani was a key voice with the president on Ukraine which could be an obstacle to increased White House engagement.” On Wednesday, the House committees asked Bolton to testify on 7 November, but it is unclear whether he will attend.

Bolton’s former deputy, Charles Kupperman, is currently seeking a court ruling on whether to comply with his congressional subpoena in the face of a White House order not to testify.

At the other side of Congress, the nominee to become ambassador to Russia, John Sullivan, faced pointed questions on Wednesday at confirmation hearings in the Senate about Giuliani and the split US policy towards Russia and Ukraine.

Sullivan, currently the deputy secretary of state, said he was aware of Giuliani’s role in a campaign against the former US ambassador to Ukraine, Marie Yovanovitch. Asked if he knew Trump’s lawyer was “seeking to smear” Yovanovitch, he replied: “I believe he was, yes.”

Sullivan confirmed he had been shown a dossier of material attacking Yovanovitch, saying it had provided by the White House to the state department legal adviser, but he was not aware it had been put together by Giuliani. He said the dossier “didn’t provide to me a basis for taking action against our ambassador”.

He said that Pompeo gave Sullivan no explanation for the decision to recall Yovanovitch before the end of her posting, other than she had “lost the confidence of the president”.

“As I understand, Trump may decide that he doesn’t like my testimony today and he doesn’t want me to go to Russia. The president can decide when he loses confidence in his ambassador – then that person is not going to continue as ambassador,” Sullivan said.

People of Uganda will rise up if Museveni rigs vote

Not just Russia: China and Iran may target US elections, experts say

Sullivan sought to avoid taking a position on the testimony by several former and current state department officials that the president, through Giuliani, had made a White House meeting and US military aid dependent on the Ukrainian government investigating Trump’s political rivals.

“Soliciting investigations into a domestic political opponent – I don’t think that would be in accord with our values,” Sullivan said. But he would not confirm that was what the president had done.

Democratic senators signaled that they were prepared to support Sullivan’s nomination as an experienced and respected diplomat, acknowledging the difficult position he was in. But they expressed concern he had not done more to find out what Trump and Giuliani were trying to achieve in Ukraine.

The ranking Democrat on the Senate foreign relations committee, Bob Menendez, told Sullivan he had been playing the role of “see no evil, hear no evil, speak no evil.”

“Do you understand the incredibly difficult job that you’re going to have as a result of that?” Menendez asked Sullivan.

“I would say, senator, you’ve cited the president’s statements. I’d cite the president’s actions,” the nominee replied, listing sanctions the administration had imposed on Russia.

Bosnia is close to the edge. We need Europe’s help