Prague, Czech Republic – Hundreds of thousands of protesters have rallied in Czech Republic’s capital Prague to demand the resignation of Prime Minister Andrej Babis, accusing him of corruption and posing a threat to democracy.

The demonstration on Saturday came a day before the 30th anniversary of the Velvet Revolution, which brought an end to decades of communist rule in the former Czechoslovakia and installed absurdist playwright Vaclav Havel as president.

The protesters now fear that Babis is dismantling some of the same freedoms won in 1989.

Waving Czech and European Union flags, the protesters chanted “Resign” as they filled Letna Park, which sits above the Vltava river in the centre of the city.

The park hosted 800,000 people during the Velvet Revolution. Organisers estimated 300,000 turned out on Saturday for what was the latest in a series of protests against the billionaire prime minister and his controversial ally, President Milos Zeman. Police confirmed over 200,000 attendees on Twitter.

NGO Milion chvilek pro demokracii (Million Moments for Democracy) launched the demonstrations in April, when a new justice minister was appointed only a day after police recommended Babis be charged with fraudulent use of EU subsidies to fund his leisure resort named Stork’s Nest.

Since then, a draft EU report suggested Babis has a conflict of interest due to his ownership of Agrofert, despite having been forced in 2017 to put the agrochemicals conglomerate into trust. Reports suggest Brussels may seek from the Czech Republic the return of over 17m euros (about $19m) paid out to.

At the protest on Saturday, Milion chvilek chairman Mikulas Minar repeated from the stage their demand that Babis either sell Agrofert and sack the justice minister, or quit politics by the end of the year.

“We must make them listen,” says Tereza, a 26 year-old student in the crowd. “If we have to come out to protest five times, 10 times, we will!”

The prime minister, on his part, has accused the NGO of seeking to exploit the anniversary of the Velvet Revolution and flatly refused the ultimatum. “A majority of Czech citizens see the situation differently from these protesters with their PR and media support,” he told Al Jazeera.

Babis said the protesters are listening to “false” accusations. The Slovak-born billionaire has claimed that the Stork’s Nest case was cooked up by the deposed political “elite”. He called the EU report an attack against the Czech Republic and insisted he had followed the conflict of interest regulations.

However, Lukas Wagenknecht, who served as Babis’ deputy during his time as finance minister in 2014-17, claimed Czech legislation is not up to the EU standards.

“Babis’ capture of state institutions and his conflict of interest make Czechia one of the most corrupt countries in the EU,” the economist, now a senator for the opposition Pirate Party, added.

President Zeman, who has spoken against Islam, the Roma community and the liberals, and who seeks deeper ties with Russia and China, was also a target of the demonstrators.

Critics say Zeman’s promise to pardon Babis if convicted in the fraud case while also pushing him to invite “extremist parties” into the minority coalition government are an affront to the rule of law.

However, Babis’ refusal to bow to that pressure could defuse some of the anger around the country, suggested Jiri Pehe, a former adviser to Havel and director of the New York University in Prague.

In addition, the state prosecutors, in a surprise move in September, halted the Stork’s Nest case.

That has helped make the government more stable than at any point since it was formed last year. Support for Babis’ Ano party, which remains the country’s most popular, is also on the rise according to recent polls. 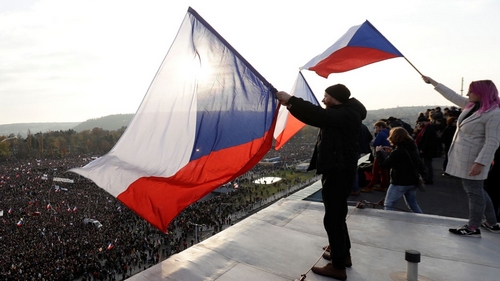 Demonstrators wave Czech flags at an anti-government rally ahead of the 30th anniversary of the 1989 Velvet Revolution. David W Cerny/Reuters

“The fraud case was an issue that helped people understand the dangers posed to democracy,” he said. “It’s important now that we make clear to the people that the problem is wider and present a positive picture of what could be achieved.”

Milion chvilek is confident that its role as a watchdog has prevented a deeper damage to democracy in the Czech Republic. The NGO now aims to build a grassroots network across the country to further the public oversight of the political system.

The Prague rally was attended by groups from across the country. On Sunday, more demonstrations are planned.

Thousands are expected to turn out in Brno, the country’s second largest city 200km southeast of Prague.

Despite their growing sway, Milion chvilek remains wary of formal politics. Roll, however, called on the country’s fragmented opposition to unite against a government viewed as corrupt.

Cooperation among the opposition parties during elections in Hungary and Poland last month helped challenge central Europe’s most entrenched populist regimes. Critics fear a weak opposition in the Czech Republic raises the risk that Babis and Zeman could take the country down a similar route.

A poll released this month showed there is widespread concern that democracy won 30 years ago is now under threat.

“We have a prime minister that views democracy as an inconvenience and is pushing us back towards an authoritarian system,” said Marketa Adamova, deputy leader of the conservative Top 09 party.

Racism ‘on the rise’ in Finland: Council of Europe